By Younkyoo Kim and Stephen Blank
This essay focuses on the growing strains in Russo-Turkish relations due to Turkey’s deeply held belief that it is foreordained to be a Eurasian energy hub and Russia’s determination to use its energy capabilities to dominate Eastern and southeastern Europe.

Big Oil in the Arctic Council?

Big Oil in the Arctic Council?

Drilling for oil is almost always risky business. Deposits are rarely found in convenient places and drilling is expensive. Even if alternative energies are slowly taking over the energy market, most experts agree that we still need oil. As current wells dry up, therefore, we must also drill in new, more challenging places, like the Arctic seas.

The Exclusive Economic Zone of Cyprus

The Exclusive Economic Zone of Cyprus 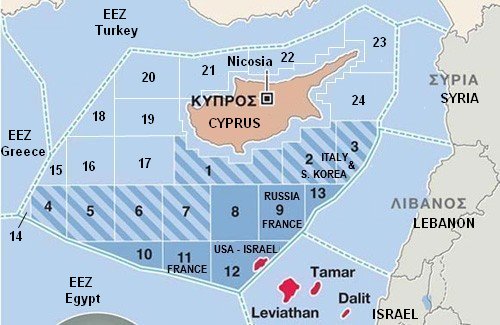 "Turkey" today threatened Russia and Italy about participating in Cyprus's EEZ. "Turkey" refuses to see what the rest of the world sees: a UN, EU member. Turks as a result, ethnic Turks, believe the world has a problem. And they are right. "Turkey" is fast becoming the world's number one problem!

Ps. The bit of sea on the top right of the map could very well be Kurdish EEZ by end of 2013!

By Daniel Fineren and Amena Bakr

(Reuters) - Iran said on Tuesday it would stop oil exports if pressure from Western sanctions got any tighter and it had a "Plan B" contingency strategy to survive without oil revenues.

Greece looks out to sea for gas wealth salvation

Greece looks out to sea for gas wealth salvation

(Reuters) - Offshore natural gas could dramatically change Greece's fortunes, should early estimates of $600 billion worth of reserves be confirmed, according to a study presented to Prime Minister Antonis Samaras in June and seen by Reuters.