Israel's drive to export its new-found natural gas could help to rebuild strained ties with old regional allies Egypt and Turkey, but could deprive Europe of a precious alternative to Russian gas.

Kurds in Turkey ask for a share from oil production 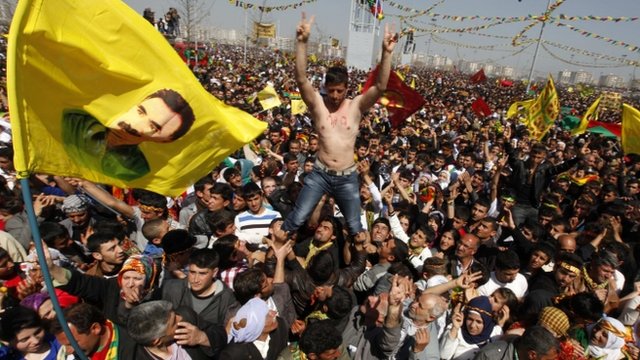 The Kurds of southeastern Turkey make an indirect motion for autonomy. The new mayor of Diyarbakir, Gülten Kışanak (photo), who is a key member of the pro-Kurdish Peace and Democracy Party, explained that the Kourodi is ready for democratic autonomy.

Eastern Ukraine is home to nine-tenths of the country's coal and one of Europe's largest shale-gas deposits. Will the region soon be Moscow's?
MATT FORD, APR-8-2014

In events that eerily resemble the prelude to Russia's annexation of Crimea, pro-Russian demonstrators have overtaken government buildings in the eastern Ukrainian cities of Kharkiv, Luhansk, and Donetsk, proclaiming a "people's republic" in Donetsk and snagging weapons and possibly hostages in Luhansk (Ukrainian police have regained control in Kharkiv).

US energy could loosen Russia’s grip on Europe

Diminishing Russia’s economic leverage over Ukraine and Western Europe could be a key component of America’s policy response. This could be achieved simply by liberalising global energy markets. The US has antiquated and unnecessary restrictions on exporting liquefied natural gas (LNG) and crude oil, and its government could consider lifting these restrictions as a priority. by Nicholas Cunningham, Mar 19, 2014
According to Reuters , Crimea may nationalize oil and gas assets within its borders belonging to Ukraine, and sell them off to Russia. Crimea's Deputy Prime Minister hinted at the possibility that it would take control of Chornomorneftegaz, a Ukrainian state-owned enterprise, and then "privatize" it by selling it to Gazprom.