By SETH J. FRANTZMAN
Like many conflicts, it shows the weakness of the current international system that obsesses over arbitrary borders that date back a hundred years.
Over the weekend, fighting erupted in the Caucasus between Armenia and Azerbaijan in the region of Nagorno-Karabakh. As many as 30 soldiers were killed on both sides and there were also civilian casualties.

Central Asia Caucasus Analyst, Najia Badykova
On February 29, 2016, the Southern Gas Corridor Advisory Council met in Baku for the second time and asserted that the diversification of EU energy sources remains a key component of the Union’s energy security policy. But the project faces serious hurdles. After many years of discussions with potential gas suppliers, Brussels has only been able to secure 10 billion cubic meters (bcm) of Azerbaijani gas per year for the corridor, a tiny fraction of EU members’ needs.

Are recent Russian maneuvers signs of increasing hostilities or just part of a long-term plan? It’s no secret that the relationship between Russia and Turkey is dismal, with the countries clashing over their respective roles in the Syrian civil war. Russia backs the Syrian regime. Turkey backs the regime’s opponents. 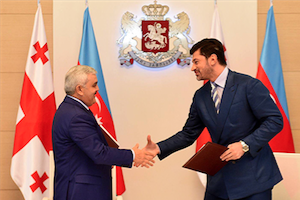 Central Asia Caucasus Analyst, Boris Ajeganov
Uncertainty on the future of Georgia’s energy security has been growing since late 2015, when Georgia’s minister of energy and deputy PM Kakha Kaladze met with Alexey Miller, CEO of Russia’s Gazprom twice in the span of a month. Discussions on Gazprom’s potential return to the Georgian market quickly raised eyebrows in Baku and caused popular protests in Tbilisi.

Ethnic Russians Leaving Central Asia and With Them, Putin’s Hopes for Influence

Publication: Eurasia Daily Monitor Volume: 13 Issue
By: Paul Goble
Because Vladimir Putin has made the presence of ethnic Russians in other countries so central to his efforts to expand Moscow’s influence, their departure from any region or country means far more now than it did a decade ago. Nowhere has their exit been more massive—and, consequently, the influence of ethnic Russians on local governments more reduced—than in Central Asia, where they are now half as numerous as they were a generation ago. And because the titular nationalities there have been growing rapidly, the share of ethnic Russians in the population of these five countries has fallen even more.

by Dorian Jones and Durna Safarova

With Russian-Turkish relations bottoming out after Turkey’s downing of a Russian military jet last November, Ankara is scrambling to reduce its dependency on Russian gas. But the help it needs from post-Soviet energy producers may not be swift in coming.