The looming end of NATO operations in Afghanistan is creating a security vacuum that puts the entire purpose of the international mission at risk. Aid groups may have to scale down their operations, and Berlin is alarmed at US threats of total withdrawal.

International forces will provide advice to Afghan military until 2020

International forces will provide advice to Afghan military until 2020 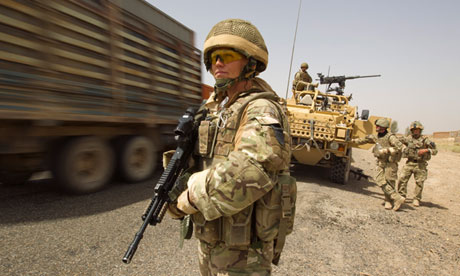 British troops in Helmand. Nato combat forces are due to withdraw from Afghanistan by the end of 2014. Photograph: Shamil Zhumatov/Reuters
International forces will provide logistical advice to the Afghan military up until 2020 after concluding that Afghanistan's national security forces will be unprepared for full operations when Nato combat troops withdraw from the country at the end of 2014.

The West's Capitulation in Afghanistan

The West's Capitulation in Afghanistan

An analysis by Christoph Sydow

After 12 years of war and thousands of deaths on both sides, the US and the Taliban are finally ready to talk peace. While the West hopes to smooth its withdrawal, human rights organizations forecast the return of dark times for women and minorities.

Karzai suspends security talks and accuses US of 'inconsistent statements'

Karzai suspends security talks and accuses US of 'inconsistent statements'

Afghanistan's president, Hamid Karzai, has suspended talks on a long-term security deal to keep US troops in his country after Nato leaves in 2014, accusing Washington of duplicity in its efforts to start peace talks with the Taliban.

* Dan Roberts in Washington and Emma Graham-Harrison in Kabul * guardian.co.uk,

The US is to open direct talks with Taliban leaders within days, it was revealed on Tuesday, after Washington agreed to drop a series of preconditions that have previously held back negotiations over the future of Afghanistan.

In a major milestone in the 12-year-old war, political representatives of the Taliban will shortly meet Afghan and US officials in Doha, the capital of Qatar, to discuss an agenda for what US officials called "peace and reconciliation" before further talks take place with Afghan government representatives soon after.