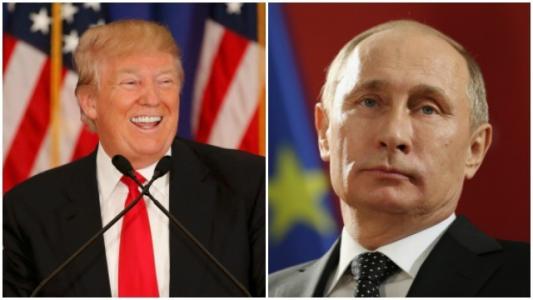 EXECUTIVE SUMMARY: Though he might be a novice in foreign policy, Donald Trump could bring about dramatic changes in the global arena by aligning with Russia against China. In this scenario, Russia would have an opportunity to align with Western civilization, ending a millennium-long schism. Will Russia be ready to end its cozy relations with the radical regime in Iran to become a true US ally in the fight against militant Islam?

US President-Elect Donald Trump lacks foreign policy experience, and during the election campaign did not proffer any comprehensive outlook on global affairs. He offered bits and pieces of ideas (building a wall along the Mexican border, moving the US embassy in Israel to Jerusalem, disparaging NATO, and demanding that allies raise their defense expenditures). Overall, he expressed isolationist sentiments alongside inconsistent and unpredictable thoughts. In any case, his focus is likely to be on domestic affairs.

Still, Trump might surprise observers. It is already emerging that he does, in fact, have clear preferences in global affairs. It seems he likes Russia (or, specifically, Vladimir Putin) and dislikes China, the two most powerful international actors other than the US. Trump probably admires Putin as a strong, charismatic leader who is intent on making Russia great again. Trump’s nomination of Rex Tillerson, a man with excellent contacts in Moscow, as Secretary of State signals a planned thaw in American-Russian relations.

In contrast, when Trump looks at China, he sees an economic rival that needs to be cut down to size. Trump feels that American industries and jobs have been stolen by China, and that Beijing is playing unfairly with its currency and taxes on US-made products. Significantly, Trump has already departed from America’s qualified “One China” policy (dating back to 1979) by taking a phone call from Taiwanese President Tsai Ing-wen. This, together with the presence of strong Taiwan backers in the incoming administration, and with Trump’s recent meeting with Prime Minister Abe of Japan, hint that Trump might be heading towards a policy of confrontation with China.

It is possible that these moves are purely tactical, and are aimed at securing a better opening position in negotiations over elements of the US-China bilateral relationship. But Trump will soon hear from his foreign policy and defense advisers that a rising China is a major challenge to “making America great again” in a geopolitical sense.

Acting on his basic instincts, Trump may well be capable of grand Kissingerian diplomacy, without possessing Kissinger’s historic, intellectual and strategic baggage. Trump could be aiming for détente with Russia and the enlistment of Putin against China.

If this happens, it would constitute a radical shift in the global balance of power, considerably enhancing American leverage in international affairs. Moreover, it holds the potential for Russia’s integration into the West. After all, Russia is culturally part of Western civilization in many ways. Obvious examples are Russian literature, music and ballet, and of course its Christian heritage.

The American post-Cold War stance regarding Russia was very problematic. In the 1990s, there was an opportunity to bring Russia into the Western architecture. A Russia characterized by a resurgent Christianity and a desire to modernize could have become an integral part of the Western world, ending a millennium-long schism – or, at least, a valued ally.

But the expansion of NATO and the EU eastward, which ignored historical Russian sensibilities, heightened the threat perception of the Russian leaders who had lost the Cold War. Western attempts to politically engineer Ukraine, so close to Moscow’s heartland, and the subsequent imposition of economic sanctions on Russia’s moves in Crimea and Ukraine are the most recent examples of Western geopolitical mistakes that pushed Russia away.

Western pressure on Russia also led to a partial Chinese-Russian entente. The Chinese demographic threat in Siberia and the struggle over central Asia were put aside to form an anti-American front.

Trump seems ready to move in a different direction. In July 2016, candidate Trump defied political correctness by saying he would consider recognizing Crimea as Russian territory and lifting sanctions against Russia. He may well accept the return of Ukraine to Russia’s sphere of influence.

Trump also seems to have little patience with European allies who prefer that the US bear most of their defense burden. It remains to be seen whether Trump will be able to overcome anti-Russian and anti-Putin sentiment in Congress, particularly among Republicans. Many of them are unforgiving regarding human rights violations by Moscow (while more forgiving about those committed by Beijing).

The big question, of course, is whether there will be a Russian quid pro quo. Trump is a businessman and is likely to expect something valuable in return. He will need visible benefits with which to market any grand deal with Russia to Congress and the American people.

Will Russia be ready to end its cozy relations with the radical regime in Iran to become a true US ally in the fight against militant Islam? Will it settle for a small, Assad-ruled Syria without Iranian and Hezbollah control? Will Russia be flexible enough to end its territorial conflict with Japan over the Kurile Islands to buttress the anti-China realignment?

Trump probably expects Russia to take these steps. Will Putin take a historic gamble and align with the West, as did Peter the Great?

There are no clear answers yet. For its part, Israel should be cognizant of the fact that a Trump administration will be capable of radical change in global affairs. The changes to the big picture that Trump might produce could have fateful implications for the Jewish state. Israel should work assiduously to promote its interests in this new environment, capitalizing on its strong strategic partnership with the US and good working relations with Russia.

Efraim Inbar is professor emeritus of political studies at Bar-Ilan University, the founding director of the Begin-Sadat Center for Strategic Studies (1993-2016), and a fellow at the Middle East Forum.

BESA Center Perspectives Papers are published through the generosity of the Greg Rosshandler Family
http://besacenter.org/perspectives-papers/387-inbar-can-trump-construct-new-world-order/