Why the Turkish left hates Erdoğan but loves Castro 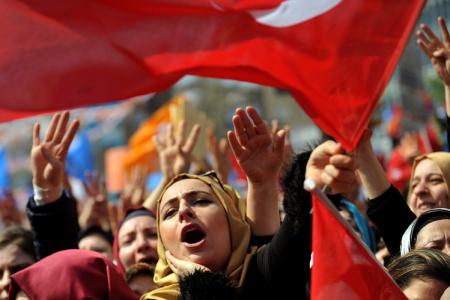 The passing of Fidel Castro was big news in Turkey as in much of the world. What was interesting was the unreserved adoration the Turkish left expressed for the late Cuban dictator. Socialist newspapers such as BirGün came out with headlines that praised “The Commandante,” as social media flooded with love for the great socialist hero and his glorious revolution.

What is wrong with all this, you can ask. Well, to me, there is at least something inconsistent. For the same Turkish leftists who have only admiration for Castro have only contempt for Turkey’s powerful president, Tayyip Erdoğan. They criticize Erdoğan almost every day for curbing free speech and crushing the opposition – and often rightly so, I must say. However, they seem to disregard the fact that Castro did the exact same things in Cuba – only more bluntly, only more brutally, only for a much longer period of time.

For Cuba under Castro was nothing but a dictatorship. As a recent Reuters story just put it succinctly, the man “cracked down on dissent, jailed his opponents, seized private businesses and homes, and monopolized the media.” Unlike Erdoğan, he even never ran in free elections and tested his popularity in ballots under a multi-party system.

The Turkish left not only fails to see the irony here. They also fail to see that the way they justify Castro’s authoritarian rule is the exact same way that supporters of President Erdoğan justify the latter’s top-down style. Here is a great hero, we hear in both cases, who uplifted the downtrodden masses and who defeated the diabolical forces of imperialism. While accomplishing such amazing things, of course, he did things in a little bit patriarchal way, but only rightly so.

Does every leftist in the world see Castro in such a positive light? Well, not necessarily. In a recent piece in the Guardian, columnist Zoe Williams, a self-defined leftist, wrote a notable piece: “Forget Fidel Castro’s policies. What matters is that he was a dictator.” Castro’s rule, according to this view, “was an insult to the principles of the left.”

For the Turkish left, however, what matters is not whether a leader is a dictator or not. What matters is whether he is “revolutionary,” “progressive,” or “anti-imperialist” (read: leftist). If the dictator has such nice qualities, then he is not a dictator, he is a hero.

The same Turkish left should not be surprised, then, when others, such as Islamists, use the same reasoning. They are surprised and enraged, however, because they don’t get the point.

I am really not writing all this to beat the Turkish left, which needs no beating at all. I rather have a heart for them most of the time, for they are so marginalized and demonized. I am rather writing all this to point out that we have a national disease: We love oppressive leaders, if they serve our interests or ideological aspirations. We defend them, we glorify them, we create cults of personalities around them. This “we” includes communists, Islamists, Kemalists, nationalists and even Kurdish nationalists. It even includes some “liberals,” I must say, who don’t appear that liberal to me.

We may begin to heal from this national disease when many people begin to say: “This guy is promoting some of my ideas, but the way he does this is authoritarian, and I don’t approve authoritarianism.”
When will we begin to say that? I have no idea. I just hope it can happen sometime before the end of the 21st century.