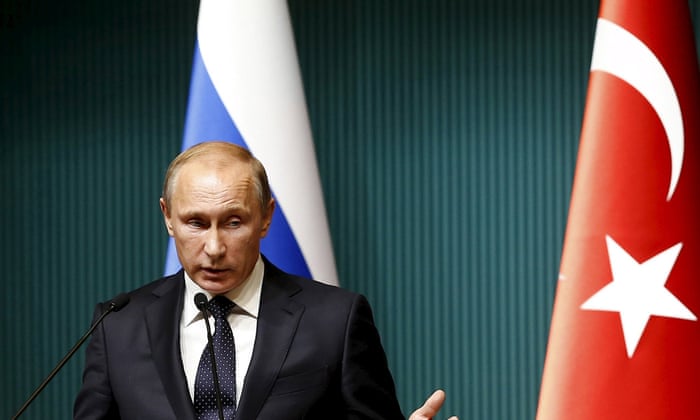 Lin Jenkins
Russia has announced a package of economic sanctions against Turkey in retaliation for the shooting down of a Russian jet four days ago on the Syrian-Turkish border.

President Vladimir Putin signed a decree outlining the curbs and the details were posted on the Kremlin’s website. Among the measures announced were restrictions on imports of some Turkish goods, a ban on charter flights between the two countries and an an end to Russian tour operators selling trips to Turkey.

It also said Turkish companies operating in Russia and Turkish staff employed by Russian companies will face restrictions and ordered the government to prepare a list of goods, businesses and jobs that would be affected.

Putin’s spokesman, Dmitry Peskov, said there are close to 90,000 Turkish nationals working in Russia. Taking family members into account, that figure rises to 200,000.

The decree, which came into force immediately, was called: “On measures to ensure Russia’s national security and protect Russian citizens from criminal and other illegal activities, and the application of special economic measures against Turkey.”

On Friday, Russia reinstated the need for visas to travel between the two countries.

Turkey’s president, Recep Tayyip Erdoğan, has said he does not want to harm relations with such an important trading partner and asked for a meeting with Putin face to face in Paris next week during the climate change summit. Putin wants an apology from Turkey before he will agree to talks. Erdoğan has refused to apologise.

In a speech delivered on Friday in the north-east of the country and broadcast live on television, Erdoğan accused Moscow of “playing with fire” in its Syria operations, although on Saturday before the sanctions were announced, he said he was “saddened” by the shooting down of the jet.

Turkey maintains that the SU-24 fighter jet had flown into its airspace and ignored repeated warnings to leave, and says it would not have shot it down if it had known it was Russian. Moscow says it was shot down by a missile fired from a Turkish jet inside Syria. Putin said the plane was easily identifiable and that America, a Turkish ally, had known the flight path of the Russian jet.

“The American side, which leads the coalition that Turkey belongs to, knew about the location and time of our planes’ flights and we were hit exactly there and at that time,” he said.

Turkey’s foreign ministry has warned its citizens against non-essential travel to Russia “until the situation becomes clear”.

Some of the sanctions announced on the Kremlin’s website had already been informally adopted in the days since the jet was shot down.