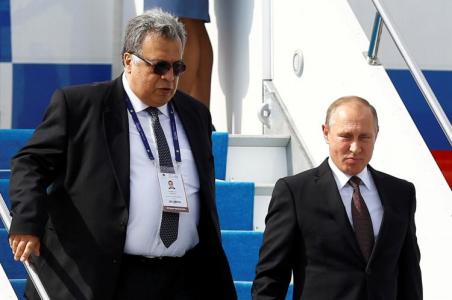 During the early video productions of the Islamic State of Iraq and the Levant (ISIL), then-Prime Minister Ahmet Davutoğlu suggested that: “Past anger [of], alienations and insults [against the Sunnis] have caused a reaction [which is ISIL]. Such an accumulation of anger [ISIL men’s anger] would not have existed if Sunni Arabs in Iraq had been not alienated.” According to this logic, the poor Sunnis were beheading infidels because they had been angry, alienated and insulted.

There was a similar reflection in the words of the ambassador’s assassin during the murder: “Don’t forget Aleppo! Don’t forget Syria!” It was not without a reason why the assassin also shouted “Allah-u akbar” [“God is Greatest,” in Arabic] – the same slogan you may hear in Gaza or at Islamist rallies in Istanbul.

Who alienated and insulted the Sunni police officer who killed the Russian ambassador? Wrong diagnosis, again. A survey earlier this year found that 13.6 percent of Turks (nearly 11 million) do NOT view ISIL as a terrorist group; and 22 percent (nearly 18 million) do NOT view it as a threat to Turkey (unsurprisingly, the percentages are higher among those who vote for the ruling Justice and Development Party).

The Russian ambassador was killed because in March the government, while arresting one journalist after another, watched with joy when some 5,000 supporters of the radical Islamist Hizb ut-Tahrir gathered at a public sports hall in the Turkish capital “to discuss the re-establishment of the caliphate.” In his speech, Mahmut Kar, Hizb ut-Tahrir’s media bureau chief, pledged to re-establish the caliphate, contrary to the expectations of the “infidels.”

He was killed because just a few days ago a university scholar called for massacre against the Alevis in Turkey, called on everyone to go to the Russian consulate (in protest of the Russian role in Aleppo). He was not, of course, prosecuted for hate speech.

The Russian ambassador was killed because the Turks have been willingly Islamized over the past several years. He was killed because the dominant state ideology produces a minister who said that, “We are all candidates to be martyrs. I hope I become a martyr. I hope you all become martyrs, too.” It was not a coincidence that the police officer who shot the Russian ambassador dead also wanted to become a martyr.

The Russian ambassador was simply a non-Muslim victim of a war in which tens of thousands of Muslims have been killed by fellow Muslims in Iraq and Syria, where Muslims bomb other Muslims’ holy mosques en masse, wherever and whenever they can. You can always ask yourself why Wahhabis are virulently anti-Shiite and vice versa. Why are the Shiite simply satanic “rejectionists,” and why, for the Shiite, are the Wahhabis simply perverted, or why, for each sect, is the other simply “not Muslim?” Is it a coincidence that Saudi schools teach pupils that Shiism is simply a Jewish heresy? Is it a coincidence that in 2006, senior Wahhabi cleric Abdul Rahman al-Barrak released a fatwa which stated that the Shiite are “infidels, apostates and hypocrites?”

Then remember al-Nusra’s 2012 statement: “The blessed operations will continue until the land of Syria is purified from the filth of the Nusayris [Syrian Alawites] and the Sunnis are relieved from their oppression.”
The Russian ambassador was killed because of a 14-century-old schism not even sparked by a theological dispute although that, too, came into the picture later, along with various political deliberations of different times. This is a feud started by rival clans in the Prophet Muhammad’s tribe, the Quraysh, and has survived so violently beyond their imagination.
http://www.hurriyetdailynews.com/uh-oh-we-are-so-awfully-shocked--again.aspx?pageID=449&nID=107545&NewsCatID=398