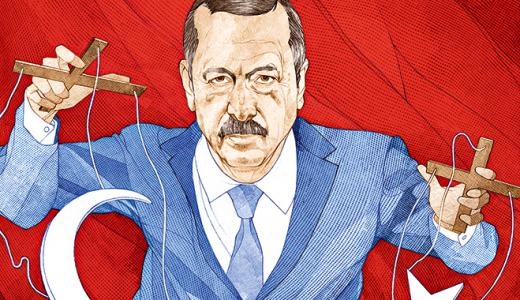 Nuray Mert
I should be the last person to write on economic matters, since it is neither my profession nor my passion. Nevertheless, none of us need to be experts nowadays to see that the prospects for Turkey’s economy are rather dim.

Over the past few years, warnings of coming crises have fallen on deaf ears. No wonder, since our president does not take any criticism into consideration. Rather, he is surrounded by self-proclaimed economic advisers who believe in self-sufficiency and independence in the name of a “nationalist economy.” Not surprisingly, one of his top advisers hails from an ultra-nationalist background, whereas another used to be a Maoist in his youth. The president himself has an Islamist-nationalist background, even though he converted to neoliberal economic politics at the point when he thought it would help his aspirations to obtain more power and wealth.

In the case of Turkey, despite chronic economic structural weaknesses, it was first political mismanagement and its resulting authoritarianism that fostered the current economic crises. As a result of the governing crises and the concomitant authoritarian sway, Turkey’s social and political stability has been damaged by deep polarization, the Kurdish issue has turned into a disaster, and foreign policy has failed altogether. Political weaknesses fostered economic crises.

For some time, opponents of the ruling party have deluded themselves as usual, expecting economic crises to weaken the government. It never occurred to them that economic crises can easily be manipulated by failed politicians to enforce authoritarian nationalist/religious politics, especially when those politicians’ minds are defined more by nationalism and Islamism than the belief in democratic politics.

Now Turkey is at that point. The deepening economic crises have only led to louder condemnation from the West, while the government has put the blame on internal and external enemies, legitimizing authoritarianism. The logical outcome of political introversion and further authoritarianism has always been a growing tendency toward a “command economy” and austerity measures in the name of the national interest, based on the past experiences of authoritarian regimes. Nonetheless, no such experiment has proven sustainable or successful in the past, and the chances are even less in today’s world.

Even if it is possible to compensate for economic failures with a nationalist roar for some time, such experiments are bound to end with further governability crises. It is not only that under the current circumstances of irretrievable global interdependency, the experiment of the command economy is doomed to fail, it is also that weakly structured economies become more vulnerable when they turn to nationalist introversion.

It is true that some authoritarian regimes since the 1990s have managed to achieve economic growth, which they read as economic success, from the giant China to the tiny Singapore. But that growth reached its limits and turned out to be a temporary economic and political management success, rather than an alternative economic and political model. In fact, these experiments ended with more dependency on global markets.

Some countries’ economic successes also depended on natural resources, as in the case of Russia and the Gulf States. In the case of Turkey, the growing economy was simply based on finance and construction. The growth economy produced solid ground based on the cooption of the rising conservative middle-class, who supported authoritarian politics out of economic interest and self-confidence rather than ideological zeal. Now, in the absence of economic interest, the support base of the governing party has become more and more ideological. This means that the governing party’s efforts to compensate economic failure with ideological zeal are finding a “positive” response.

The latest crisis has not yet been felt by majority, with many thinking that the rise of the U.S. dollar can only be the concern of dollar billionaires. However, the Turkey’s current political adventure does not promise any sort of stability or sustainability, whether it be economic, social or political. No wonder the president and his party are pushing for a quick transformation of the political system to a self-styled “Turkish President of the Republic System.” Alas, that is nothing more than one more dangerous political adventure.