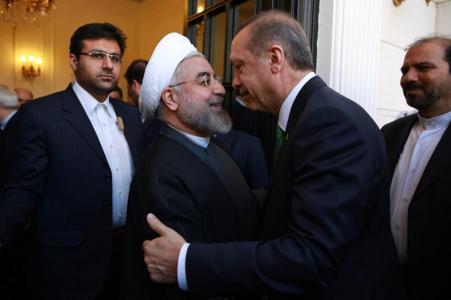 Burak Bekdil
A few days ago, columnist Nevşin Mengü wrote an excellent piece in this newspaper, “Iran’s Turkish question,” (HDN, Nov. 22). Ms. Mengü wrote that she was wandering around a historic caravansary outside Kashan in Iran where a young man said there was no such language as Turkish as “Turkish was a dialect of Farsi.”

Ms. Mengü “was amazed.” Other Farsi youths, she wrote, believed the Turkish (language) was just misspoken Farsi. She concluded that “although never enunciated out loud, Iran has a ‘Turkish’ problem.” She is right.

Ms. Mengü, in her column, also mentioned that in 2009, a young sports journalist was incarcerated in solitary confinement for a couple of months for printing a poster supporting Tractor Sazi, the football club of the Azeri majority city of Tabriz: The poster was in Turkish and read “Long Live Tractor Sazi.”

Nevertheless, this is beyond “Iran’s Turkish question” or “Turkey’s Iranian question.” This, as this columnist once suggested, is a 14-century-old schism not even sparked by a theological dispute although that too came later into the picture, along with various political deliberations of different times: “No doubt this part of the world would have been much more tranquil and peaceful, much less violent, perhaps much less fun to observe, much tougher to divide for the outsider but a much more decent place to live in had rival clans in the Prophet Muhammad’s tribe, the Quraysh, never started a feud that would survive beyond their imagination.”

A few days ago President Recep Tayyip Erdoğan condemned the “increasing Shiite expansionism and dominance in Iraq.” Typically, in this part of the world, Sunni and Shiite Islamists accuse each other of trying to “expand” along sectarian lines and to “undermine the other.” Most probably, both blocs are right. Then, in fine Kodak-moment diplomatic scenes, they both accuse non-Muslims of plotting conspiracies to pit Muslim sects against each other. It’s the foreign conspirators! They never ask themselves why Sunni and Shiite Muslims are so silly as to bomb each other’s mosques and kill fellow Muslims en masse by being pawns in a non-Muslim conspiracy – if it ever existed.

Mr. Erdoğan himself has acknowledged more than once that “in this bloodshed [in the Middle East] both the murderers and the murdered are Muslims.” Why? Is it because the smart Christians, Jews, Hindus, Buddhists, Shintoists and atheists are pitting not-so-smart Muslims against each other? Is that theory not self-discriminatory?

Muslims should ask themselves better questions to face the reality they live in. Why, for instance, are Wahhabis virulently anti-Shiite and vice versa? Why are the Shiite simply satanic “rejectionists,” and why, for the Shiite, are the Wahhabis simply perverted, or why, for each sect, is the other simply “not Muslim.”

Is it a coincidence that Saudi schools teach pupils that Shiism is simply a Jewish heresy? Is it a coincidence that in 2006, senior Wahhabi cleric Abdul Rahman al-Barrak released a fatwa which stated that the Shiite are “infidels, apostates and hypocrites ... [and] they are more dangerous than Jews or Christians?” Why did al-Qaeda’s younger twin, al-Nusrah, now rebranded, declare in 2012: “The blessed operations will continue until the land of Syria is purified from the filth of the Nusayris [Syrian Alawites] and the Sunnis are relieved from their oppression?”

“Iran’s Turkish question” and “Turkey’s Iranian question” will always be there, along with Saudi Arabia’s Iranian question and Iran’s Wahhabi question as long as Muslims in this part of the world believe that Muslims are the biggest murderer of Muslims only because of non-Muslim conspiracies.
http://www.hurriyetdailynews.com/turkeys-iranian-question.aspx?pageID=449&nID=106534&NewsCatID=398