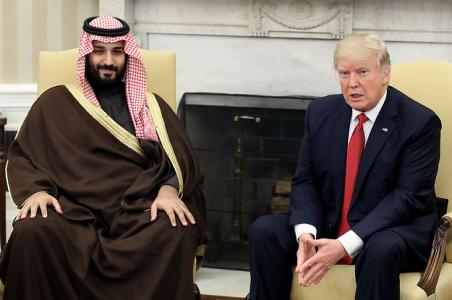 US President Donald Trump’s situation plummeted sharply in the 24 hours between Wednesday (May 17) and Thursday (May 18). In the five months since moving into the White House, he has struggled against daily firestorms ignited by his enemies in the political, media and intelligence establishments.

Thursday morning, he was tossed into the flames when he learned that the Justice Department had appointed former FBI director Robert Mueller as special counsel to “oversee a federal investigation into Russian interference in the 2016 election, including potential collusion between the president’s campaign associations and Russian officials.”
After consistent denials had no effect, Trump’s supporters and staff initially hoped that the appointment of this respected former spy chief would finally put a stop to the negative storm besetting his presidency, and let him get on with the health, tax, economic and other reforms he had set in motion.
They were wrong, the adverse leaks to the media continued notwithstanding, and were clearly designed to steer the Mueller probe in a negative direction.
A gravely troubled president therefore sets out on his first foreign trip – first stop Riyadh on May 22, followed by Israel on May 23-24, the Vatican and Brussels a day later. That trip was further shadowed by the press report Tuesday, May 16, claiming Trump had leaked classified information from Israeli intelligence to Russian Foreign Minister Sergey Lavrov during his visit to the White House on May 10.
This leak, consistently denied by the White House, was clearly aimed at sabotaging the president’s plans to crown his visits to Riyadh and Israel by successful breakthroughs with America’s foremost allies in the region.
Foreign trips often serve harassed political leaders to escape their troubles at home and bask in the warm welcomes of friendly nations and colleagues. But Donald Trump was deprived in advance of this respite by the slur on his integrity in dealing with highly sensitive security and intelligence matters that was cast by allegations of betraying classified information from a foreign partner.
The most pressing topic in the Middle East today is the expansion of the military-political-intelligence alliance of Russia, Iran and Syria to include Iraq. (DEBKAfile revealed Wednesday, May 17 that an Iraqi military delegation had arrived in Damascus for the first groundbreaking visit in decades). However the Mueller probe, centering as it does on the president’s associates’ alleged interaction with Russian officials, ties Trump’s hands on a vital foreign policy issue: the urgent need for US cooperation with Russia for resolving the Syrian and other burning crises afflicting the region.
The impact of Trump’s imposed inaction is already apparent in the conduct of some of the relevant leaders, such as President Vladimir Putin, Iran’s supreme leader Ayatollah Ali Khamenei, Egypt’s Abdul-Fatteh El-Sisi, King Abdullah of Jordan and Iraqi Prime Minister Haydar al-Abadi.
Each of those leaders plans to make hay from the policy void created by the Trump administration’s grim situation; each is meanwhile striking out for alternative partners to lessen their dependence on Washington.
Saudi King Salman and his Defense Minister Deputy Crown Prince Mohammad Bin Salman are nonetheless carrying on as though nothing is amiss. Possibly because they refuse to read the signs in Washington, they are forging ahead with arrangements for an historic summit, with invitations issued to some 50 Arab and Muslim rulers to meet the visiting US president in Riyadh.
At his next stop, his Israeli hosts have still not received a detailed outline of his plans – only the times of his arrival and departure. The impression gained in Jerusalem is that the White House is too distracted by the mayhem surrounding the president to carry out its normal duties.
http://debka.com/article/26059/Trump-reaches-Mid-East-trip-under-a-grim-probe