Toward A New World Order? 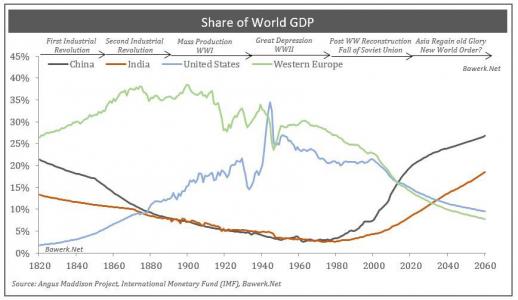 by Tyler Durden
Submitted by Eugen von Bohm-Bawerk via Bawerk.net,

A Brave New World is coming? Perhaps. We had a recent discussion with a group of people in the hopeless business of doing long term forecasting. This made us think about what the world will look like over the next 20 to 40 years. A pretty thankless task, but the bottom line is without a damn good war, Asia will be the way of the future.

As an experiment, assume, as most long term forecasters do, that both Europe and the US have reached a mature plateau where growth will average around 1.5 to 2 per cent over the long term, while China will slowly decelerate from the current 6.5 to 3 per cent and India from today`s 7 to around 4. In this scenario (which we do not necessarily believe in, as China is up for en epic crash) what will be the share of global GDP by, say, 2060? And what are the geopolitical implications?

Using data from Angus Maddison, the IMF and then extrapolating with our simple assumptions (which are just as good as any) we get the following picture.

In international dollar terms (PPP) China is already the world largest economy. By 2060, under the abovementioned assumptions, China will constitute almost 30 per cent of global GDP, almost reaching the level Western Europe had when establishing the European dominance over the world. The US and Europe will both be less than 10 per cent of the world economy. It is also interesting to note that India will surpass Western Europe already in 2030 and be close to 20 per cent by 2060. The two Asian behemoths will together constitute 45 per cent versus the US and Western Europe’s mere 17 per cent in 2060.

What happened the last time such seismic shifts in economic gravity took place? The first industrial revolution was all about Western Europe, with England and the Low Countries the predominant actors. The foundation for the British Empire was laid and the unipolar world that followed was relatively stable with Britain as the undisputed hegemon.

However, the second industrial revolution quickly spread to Germany and the US. Not long after, the British economy lost is preeminent place a manufacturer of the world. Britain understood that the unipolar world its empire represented would be lost unless the newfound players could be contained. Germany in particular was keen on an empire and started its exploits in Africa in the 1880s to the detriment of an expanding British empire. The straw that probably broke British patience was the German-funded railway to the Middle East. When completed the Brits, as the unquestionable global naval power, would lose control over German oil supplies. The Germans would also gain access to the port of Basra, avoiding the Suez Canal for access to the eastern part of the German colonial empire. German demand for more “Lebensraum” obviously did not go down well with Westerminister. The tragic end result was the industrial killing of Europeans on a scale never witnessed before.

By taking on Germany, Britain tried to bite off more than it could chew. Britain ended up bankrupt and the US emerged as the largest creditor nation on the planet. While it took some time to make the transition, by the end of World War II the US was the undisputable super power. However, this was merely a change of headquarter as the Imperial City of the British empire moved from London to New York. Culturally the two nations were and still are close; and to this day the special relationship between Britain and the US is cultivated more than any.

Still, the key takeaway from the period stretching between 1880s to 1914 (or 1945) is one where the world hegemon experience relative decline as its manufacturing base is outcompeted by technologically advancing competitors amid a deteriorating balance of payment. The end result was a world in turmoil with legacy structures, be it political and economic, changing beyond recognition.

While history never repeats itself, it certainly rhymes and today’s situation is in many respects quite similar to the pre-WWI period. Once again, we have a global hegemon going deeper and deeper into debt. A balance of payment problem, funded by the “exorbitant privilege” of issuing the global reserve currency, has transformed the US from the world’s largest creditor nations to the largest debtor.

Emerging economies thus feel confident when threatening the US dominance by increasingly making their presence felt in what used to be US (or US satellite states) exclusive territory. China in particular claim surrounding waters as its playground and a more assertive Russia has started to fight back against NATO mission creep.

Just as in the pre-WWI era, military spending by potential adversaries is catching up with the hegemon. Proxy wars are increasingly being fought as the world move toward a multipolar world order. As history has shown, the transition from a unipolar to a multipolar world can be taxing and unfortunately bloody. It is also worth noting that the Beijing consensus is materially different from the London/Washington worldview. While moving the Imperial City from London to Washington was not all bad for Europe, another move to Beijing could be far more disruptive.

Bottom line, if you believe in the growth assumptions outlined above, the world economy and by extension, political constellations are due for changes unprecedented in later modern history. Finally, it will be more than interesting to see either a Trump presidency tread what will undoubtedly be very treacherous waters.