This Holiday Season, Beware Of Turkey 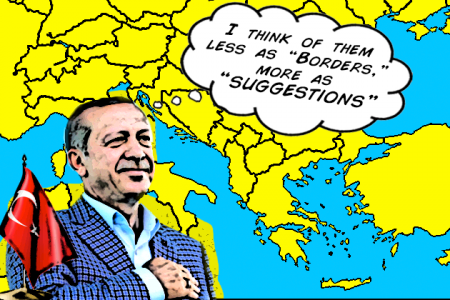 Endy Zemenides
In just under two months, Donald Trump will be sworn in as the 45th President of the United States. As many of his predecessors learned before him, no amount of intelligence briefings, travel or business experience, or even previous foreign policy experience fully girds a new President and his team for that first time they get called to the Situation Room to deal with an international crisis.

Like many other businessmen, President-elect Trump surely values predictability — predictable tax structure, legal regimes, business partners with a track record. Starting on January 20 he will inherit a world that is anything but predictable, a world that will resist even his greatest efforts to tame and order it. At the beginning of 2017, President Trump will need to at least have reliable and predictable allies.

Enter Turkey. A NATO ally whose strongman President has a disdain for American media elite and a penchant for nationalism, the Turkey of Recep Tayyip Erdoğan is on the front lines of many flashpoints that the Trump Administration may encounter. Turkey shares the world’s longest border with the Islamic State, its role in the Kurdish question — as home to the greatest number of Kurds in the world — and on again/off again hostility towards the Kurds interferes with the war against ISIS, and Ankara’s often perplexing relations with Russia, China, Iran, Israel and non-state actors like al-Nusra and Hamas raise the question of how reliable an ally Turkey can be.

At its highest ranks, the incoming administration has indicated that it believes Turkey can be reliable. The Vice President-elect has pledged to “bring our relations with Turkey to a better stance like in the old days.” The incoming National Security Advisor, Lt. General Michael Flynn, wrote on Election Day that “We need to adjust our foreign policy to recognize Turkey as a priority. We need to see the world from Turkey’s perspective.” In Turkey, the ruling elite — especially the anti-Americans among them — eagerly anticipate a reset in relations with the U.S. under a President Trump, believing that the American “establishment” has turned on Turkey and that Trump’s anti-establishment credentials somehow favor Turkey.

President-elect Trump must disabuse everyone of the notion that Turkey is a reliable ally and that his Administration will lean on Turkey more. Turkey has transformed itself from “ally” to “frenemy”. In one year, Erdogan’s Turkey went from nearly dragging NATO into open hostilities with Russia to much warmer relations with Moscow which include undermining Western efforts to make Europe less energy dependent on Russia. Ankara’s continued oppression of the Kurds, loyalty to the Muslim Brotherhood, rift with Israel, and blockade of Armenia make its past declaration of a “zero problems with neighbors” foreign policy laughable. Turkey’s historically bad record before the European Court of Human Rights, its denial of religious freedom to its Christian and other religious minorities, the vindictive and wide ranging “purge” it has conducted after the failed coup this past July, its obsession with jailing journalists and getting custody of former Erdogan ally Fethullah Gülen make a mockery of even the most basic commitments to human rights and leave one wondering how anyone in the West ever considered Turkey a model Islamic democracy.

While most of the above has been thoroughly analyzed, here are three no-less important but often ignored flashpoints that Turkey could ignite in President Trump’s first 100 days. Not surprisingly, all three flashpoints fit under the umbrella of Greco-Turkish relations, an area where the U.S. has unwittingly encouraged Turkish aggressiveness and intransigence (especially in “the old days”) by avoiding honesty regarding Turkey’s behavior:

Last week, Erdogan once again challenged the validity of the Lausanne Treaty of 1923 which set the borders of Greece and Turkey and is the foundation of bilateral relations between the two states. This is no mere bluster. When combined with Turkey’s consistent violations of Greek airspace and territorial waters and Erdogan’s allusion to a right of protection of “kinsmen” located in Greece, it would be fair to wonder whether we are merely lucky that a serious incident — if not straight out war — has not occurred in the Aegean between these two NATO allies.

It would not be fair to criticize Turkey on this front without pointing out that it houses over 2.5 million refugees (mostly from Syria). Moreover, the European countries that are the intended destination for most of these refugees are doing too little — in terms of resettlement, economic contributions, or establishing safe areas in Syria. Yet Turkey has used the refugee crisis to advance grander objectives (EU membership, visa free travel) and is using the refugees to blackmail Europe (again). Erdogan’s threat to flood Europe with migrants will presumably come across poorly with an Administration that campaigned on a platform of severely restricting Muslim immigration and building walls.

The latest round of negotiations to reunify Cyprus have been characterized as having the most promise in the 42 years since Turkey’s invasion of Cyprus. Yet one area remains where no progress has been made: Turkey’s occupation presence. Any peace deal giving Turkey the right to keep troops on Cyprus for an unspecified period or to intervene in Cyprus’ politic would be fatally flawed and would only guarantee a “No” vote in the required referendum. After upset defeats in referendums over Brexit and the Colombian peace deal, the international community would be wise to avoid underestimating what it will take to earn a “Yes” vote on Cyprus.

A reunified Cyprus would have important consequences, especially for a Trump Administration that would like to stabilize crises, win, and refocus on an “America first” agenda. A reunified Cyprus could become both a diplomatic and energy hub, a place where not only Greek and Turkish Cypriots, but Greece, Turkey, Egypt, Israel and Lebanon cooperate economically and politically. The region could quickly become characterized by cooperation rather than conflict. American companies — heavily involved in the natural gas fields in Cyprus and Israel — would immediately win, Israel would gain energy independence, and a potential flashpoint between NATO allies would disappear.

It is not time for “old days” with Turkey. Those were the days that Washington turned a blind eye to all of the above, remained so committed to quiet diplomacy with Turkey that one wondered whether Ankara heard anything at all, and sacrificed allies and strategic partners for the sake of seeing the world through Turkey’s eyes. If the President-elect wants to send a signal of change for the better with regards to Turkey, he should declare that his Administration will end the policy of blank checks and kids glove treatment for Turkey. The President-elect has previously indicated that he would have expectations of other NATO allies, and he should have the same of Turkey. The days of rampant human rights violations, hindering the war on ISIS, using American arms to occupy a strategic partner and challenge the sovereignty of a U.S. ally have to end.