These wake-up calls must be heeded properly 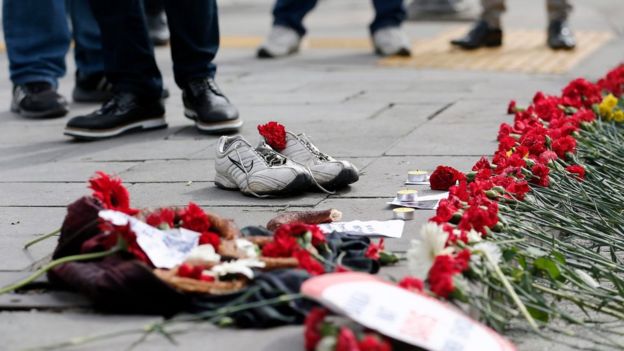 SEMİH İDİZ, hurriyetdailynews
Less than a month after the last terrorist attack, which left 28 dead and scores injured in the Turkish capital, Ankara witnessed a new terrorist atrocity on Sunday evening that instantly killed 30 people and was followed by a mounting death toll due to the large number of seriously injured.

This attack came not just shortly after the previous one, but also took place in a busy part of the city that is a stone’s throw from where the attack on Feb. 17 took place. This is also the third atrocity committed in Ankara within the space of five months, which have together killed nearly 200 innocent people.

After the last attack, Prime Minister Ahmet Davutoğlu announced that “a special security plan” would go into force in Ankara, given its specific position as the country’s capital. He also assured the public that all necessary precautions would be taken to prevent a repeat of such attacks.

The attack on Sunday evening proved, however, that whatever this new security plan for Ankara entailed, it did not amount to much in the end. Not surprisingly, confidence among ordinary citizens about the government’s ability to prevent such attacks is at an all-time low.

Most also fear that this is not the last attack. Of course, it is not clear what precautions can be taken in such an asymmetric war. The Paris attacks and the attack in San Bernardino in the U.S. last year showed that even countries that have suffered such attacks in the past, and which are supposed to have the most advanced policing capabilities, are helpless in such situations.

Preventive security measures are vitally important and indispensable. When explained properly to the public, and when the legal framework is respected, people are prepared to accept the inconveniences that these often involve.

But more has to be done than just taking preventive security measures, especially in Turkey. The government also has to consider the social and political dynamics that have resulted in the situation the country finds itself – because nothing transpires in a vacuum.

The Syrian crisis, for example, has provided a fertile ground for spawning terrorism against Turkey. It is incumbent on the government now to review its policies, and realistically evaluate its past mistakes in this regard. One lesson, at least, seems to have been learned.

The government did not try and pin the blame for Sunday’s attack instantly on a specific group over which it has a dispute with the West. Doing so on Feb. 17 gave the impression that Ankara was trying to make a quick point rather than find the true perpetrator.

This eventually left Prime Minister Davutoğlu in an embarrassing situation when it became apparent that the suicide bomber then was not from the Syria-based People’s Protection Units (YPG), which is working with the West even though Ankara considers it to be a terrorist organization linked to the outlawed Kurdistan Workers’ Party (PKK). The bomber turned out to be from a little known PKK offshoot.

Turkey is also flooded again with the usual messages of condolences from foreign leaders, but it is not hard to imagine that there are dark quarters in certain countries that are happy to see these attacks taking place in Ankara, because of the anger they feel over Turkey’s policies in the Middle East.

The government needs to review its general foreign policy priorities now more than ever and move towards ones that increase Turkey’s security – not ones that threaten it.

It also has to show wisdom, as it conducts its war against the PKK, in order not aggravate tensions between the country’s Turkish and Kurdish citizens. Nowruz, the Kurdish New Year, is just around the corner, and the way in which the security forces react to the manner some Kurds will mark the occasion will be crucial.

Whoever is behind them, these attacks in Ankara are ultimately wake-up calls. If these are not heeded properly Turkey will be condemned to much harder days ahead.