The trouble with home-grown jihadists 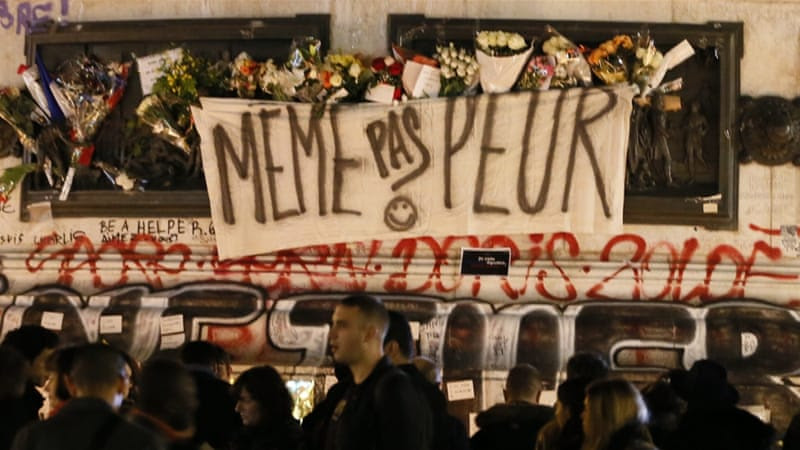 After a series of attacks were carried out in Paris and outside the Stade de France in Saint-Denis on Friday night, Francois Hollande, the French president, declared to the nation: "We know who committed those crimes."

On Saturday morning, he gave names: "The terrorist army of Daesh [ISIL] is behind the attacks."

And an hour later, the Islamic State of Iraq and the Levant issued a statement: "Eight brothers carrying explosive belts and guns targeted areas in the heart of the French capital that were specifically chosen in advance: the Stade de France during a match against Germany; the Bataclan where hundreds of idolaters were together in a party of perversity as well as other targets in the 10th, 11th and 18th arrondissement. France and those who follow its path must know that they remain the principle targets of [ISIL]."

Hollande called it "an act of war" and promised France would show "no mercy" towards the perpetrators.

Those were strong words to describe France's new reality. This is war. This sounds familiar. Many of us thought that some sort of war had already begun back in January when home-grown radicals assassinated 12 people at the offices of Charlie Hebdo, among them the country's most cherished cartoonists, before going on to target and kill four French Jews at a Kosher supermarket.

We had seen, as a result, French armed forces deployed on the streets of France to protect Jewish schools, newspaper offices, Paris landmarks, and personalities. We had somehow got used to it, and had learned to live in a state of heightened alert and vigilance.

Now, considering the scale and deadly ambition shown by Friday's coordinated attacks, we have reached "another dimension" as ordinary Parisians put it on Saturday when interviewed by foreign media - or an "unprecedented" level of threat, in the words of Hollande. We are faced with the actions of a "terrorist army" whose soldiers come both from abroad and from within our country.

Abroad, this enemy, under the banner of a caliphate, has established its territory with a burgeoning administration spreading from Syria to Iraq. It also operates in many different places around the world thanks to its affiliates, such as in Africa, with Boko Haram. The war is a reality there and France hasn't waited until this week's events to start fighting against ISIL.

In Mali, the French army has led a UN-mandated coalition against radicals since January 2013. France is also the most active European partner of the coalition against ISIL in Syria and Iraq. It has just sent the Charles de Gaulle aircraft carrier to the region.

However, France cannot fight ISIL alone and the Paris attacks raise serious questions for its partners in the coalition, spearheaded by the United States, about what democracies are ready to risk to defeat ISIL.

Aerial bombings have only managed so far to modestly contain ISIL and the Kurdish Peshmerga forces are, in effect, fighting this war on our behalf on the ground. Are Paris and other Western capitals ready to send troops? ISIL is convinced that they never will; and this certainty feeds into their plans to strike the West at home whenever possible.

But if this is war, as Hollande asserted on Friday night, we must be coherent. The enemy is also present on domestic soil in the shape of home-grown jihadists, born, educated, and radicalised in France. If we are at war, this makes them traitors.

In 1945, French traitors who had collaborated with the Nazis were deported, exiled, sentenced to imprisonment and some were executed at dawn by a firing squad. Many were unfortunately also victims of their compatriots' rage; they were humiliated publicly or even lynched.

Will France now treat Frenchmen who are ready to blow themselves up against their own people as traitors, or will it choose to continue seeing them as lost children who need to be welcomed back into society?

As we can see, the reality of war, and its semantics, raises the stakes significantly. The question for France, and for democracies, is whether they are ready to embrace the consequences? Nothing is less sure.

The fight against ISIL is going to be a long, contrarian and bloody one with no certainty of success. Everything else is pure conjecture.