The land of martyrs and days of mourning 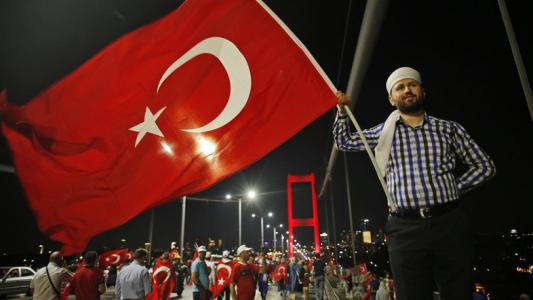 Burak Bekdil
If you typed the Turkish word for martyr (şehit) into Google on the day after the twin bombings in Istanbul, you would have gotten more than 4.5 million results. Until a few decades ago, “martyr” in official and public Turkish lexicon meant a soldier who died while defending their homeland from occupying powers.

After the Kurdistan Workers’ Party (PKK) burst onto the scene in 1984, martyr came to mean a soldier who died while defending the homeland from occupying powers and terrorists attacking from inside the homeland. Today, according to the military headquarters, it means all of the above as well as foreign jihadists fighting in Syria.

The lexicon part of the problem does not change the fact that people have been dying in their thousands over the course of a year and politics remains the same ugly politics, Turkish or Kurdish. The spiral has not changed even by an inch since 1984: There is a terrorist attack. We mourn our martyrs in emotional moments. Condolences pour in. The nation unites in grief.

This spiral will go on. How does this columnist know? Simple. We keep making the wrong diagnosis. According to President Recep Tayyip Erdoğan, we keep having martyrs because the West is “mad and jealous” about Turkey’s spectacular per capita income (at around $8,000 vs around $30,000 in the West). The West is jealous about Turkey’s roads, airports, hospitals, weapons systems and its wealth. So it is plotting against Turkey, using terrorist groups. That is why we have martyrs. No one asks why the PKKstarted acts of terror in 1984, when Turkey’s per capita income was barely $3,000. Was the West jealous about a country with barely $3,000 per capita income?

Wrong diagnoses will always lead to worse health. In Turkey’s case, they will lead to more coffins wrapped in the Crescent and Star. The Irish Republican Army (IRA) did not disappear because a British prime minister declared it non-Irish. Nor will the Islamic State of Iraq and the Levant (ISIL) disappear because Mr. Erdoğan declares it un-Islamic. By the same logic, renaming the PKK as, say, the “Peaceful Kurdish Kinship,” will not end violence. The IRA killed in the name of Irish nationalism/homeland; ISIL kills in the name of Islam; and the PKK kills in the name of Kurdish nationalism/the homeland, not because the West is jealous of Turkey’s “rise and rise.”
http://www.hurriyetdailynews.com/the-land-of-martyrs-and-days-of-mourning.aspx?pageID=449&nID=107255&NewsCatID=398