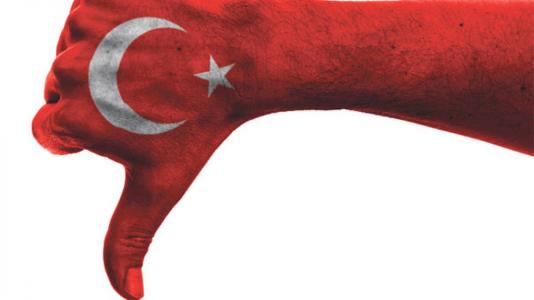 Hurriyet Daily News
The Turkish economy may collapse in a couple of years if politicians do not show the West that the economy is trust-worthy, Daron Acemoğlu, Professor at the Massachusetts Institute of Technology (MIT), told the daily Hürriyet.

“Economic growth comes from consumption and consumption is encouraged by loans. This is not sustainable. We have very little time left. The building has not collapsed yet, but it can. There might be a crisis,” Acemoğlu said.

“This may occur in the next one or two years,” he added, indicating that Turkey still attracts short-term foreign capital, which allows narrowing the current account deficit. However, this might change when Turkey has difficulties to take out loans to pay off its debts, he said.

“The positive image on Turkey still remains. But they [foreign capital] are gradually being withdrawn. This is why the U.S. dollar has gained value [against the Turkish Lira]. If the interest rates rise in the U.S., which is expected to in Trump’s administration, the withdrawal of capital will accelerate. We have to get our act together before this happens,” he said.

“In the long-term, we have to show the West that our economy is developing. Because foreign money comes in by virtue of the reports they give. We are shaping our foreign policy by our domestic politics. This is not good,” he added.

Acemoğlu added that economic development is highly correlated to press freedom. “For long-term development, transparency, openness, comprehensiveness and competitiveness are crucial. It is very hard to provide that in places where there is no press freedom. Then, the possibility of monopolization, corruption of the judicial system, and the emergence of dictatorship escalates,” he said.

Acemoğlu is optimistic on social change in Turkey. “The infrastructure and economic modernization are way ahead of where they were in the 1990’s. Right now we are more developed and are a more open society. Despite the situation of the media and rising authoritarianism, Turkey is more open than before. It accesses the outer world via social media. The horizon of the ideas of the Turkish people is wider. There are things to be hopeful about for the future,” he said
http://www.hurriyetdailynews.com/the-economy-may-collapse-soon-daron-acemoglu.aspx?PageID=238&NID=106626&NewsCatID=344