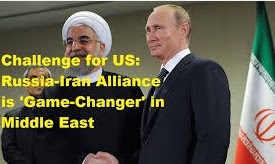 The record shows that Russia has not been present militarily in Iran since 1946; and this is the first time since the 1979 Islamic Revolution that Iran allowed another nation to use Iranian territory for a military operation.

Bets could be made the Pentagon would, predictably, freak out like a bunch of pampered, irate teens. They did not disappoint, complaining that Russia’s advance warning did not allow enough time to «prepare» – as in blaring all across the planet another episode of «Russian aggression», on top of it in cahoots with «the mullahs». Further desperation ensued, with Washington claiming Iran might have violated UN Security Council resolutions.

Moscow’s spin, in contrast, was a beauty; this was all about logistics and cost cutting. Admiral Vladimir Komoyedov, chair of the State Duma’s Defense Committee and a former commander of the Black Sea Fleet, gave a lovely explanation of the modus operandi:

«It is expensive and takes a long time to fly from bases in the European part of Russia. The issue of the cost of military combat activities is, at present, a priority. We must not go over the current Defense Ministry budget. Flying Tu-22s from Iran means using less fuel and carrying larger payloads... Russia won’t be able to find a friendlier and more suitable, from the point of view of security, country in that part of the world, and strikes must be carried out if we want to end this war... Airfields in Syria are not suitable because of the constant [need for] flying over areas of combat activities».

Don’t mess with the SCO

All fine and dandy then. The Pentagon will keep crying foul. Enraged Zionists in Israel and fanatic Wahhabis in Saudi Arabia will throw tantrums and turbo-charge the proverbial «Iranian existential threat» to apocalyptic levels. Whatever. These «facts in the skies» cannot be altered. Especially because if they open the way for a decisive victory in the battle for East Aleppo, the foreign-imposed Syrian civil war will be all but over.

Ali Shamkhani, head of Iran’s National Security Council, made no mistake this is all about Iran-Russia strategic cooperation in a – real – fight against ISIS/ISIL/Daesh terror, and not, as spun by Western corporate media, the return of Iran as a «military asset» of a great power.

Iraqi Prime Minister Haider al-Abadi, for his part, stressed, «I allowed the bombers to fly over because we received clear information about them. They make precise strikes, avoid casualties among civilians. So, we will consider all the requests concerning security of civilians in Syria».

This was code for Baghdad coolly allowing Russian access through Iraqi airspace for the TU-22M3 bombers. Next inevitable step would be the Russian Caspian fleet launching cruise missiles over Iranian and Iraqi airspace towards those Beltway-protected «rebels» in Syria.

And there’s more, much more.

A 2015 Moscow-Damascus agreement has now been ratified by Russia. That, in effect, turns the Russian air base at Khmeimim into a permanent military base in the eastern Mediterranean.

Beijing and Damascus, for their part, have just agreed on closer military ties on top of Chinese humanitarian aid. Syrian Arab Army personnel will eventually be trained by Chinese military instructors.

Beijing is now directly involved in Syria for a key national security reason; hundreds of Uyghurs have joined Daesh or follow al-Qaeda goon Abu Muhammad al-Julani, the much-appreciated-in-the Beltway leader of the Army of Syrian Conquest – and may eventually return to Xinjiang to wage jihad.

And then, there’s the absolutely delicious cherry in the cheesecake, as professor of Middle East Studies at Shanghai International Studies University, Zhao Weiming, told the Global Times; Beijing’s new power play in Syria is payback for Pentagon interference in the South China Sea.

So what will Hillary do?

All of the above points to the new look of what used to be a white elephant in the room; the Shanghai Cooperation Organization (SCO) now means serious business.

As the «4+1» (Russia, Iran, Iraq, Syria, plus Hezbollah) started to share intel and operation procedures last year, including a coordination center in Baghdad, analysts such as Alistair Cooke and myself saw it as en embryo of the SCO in action. This was definitely, already, an alternative to NATO’s «humanitarian» imperialism and regime change obsession. For the first time NATO was not free anymore to roam around the world like an out-of-control Robocop. Even though only Russia and China were SCO members, and Iran an observer, the cooperation involved – at the request of a government fighting jihadis and still a target for regime change – already qualified as a major, new geopolitical fact on the ground.

Now, this variant of the New Silk Roads – New Silk Airways? – involving Russia, Iran, Iraq and Syria and precisely targeting Salafi-jihadism, qualifies once again as accelerated Eurasia integration. Both SCO heavyweights China and Russia will not only admit Iran as a full member as early as next year; they know Iran is a key strategic asset in a battle against NATO, and they will never let Syria become the new Libya. In parallel, Russia’s strategic moves in Crimea and Syria are set to be dissected in excruciating detail in Chinese military academies.

Eurasia integration is being progressively intertwined with the SCO.

Whatever Tel Aviv and Riyadh – with their massive Washington lobbies – may fear about Russian-Iranian security cooperation, it’s NATO that’s livid. And much more than NATO, Hillary «Queen of War» Clinton.

The record shows Hillary with a severe crush on Assad to be dispatched the Gaddafi way. In the event of a Hillary presidency, bets can be made she will force the Pentagon to impose a no-fly zone in northern Syria and weaponize assorted «rebel» remnants to Kingdom Come.

And then there’s Iran. During the 2008 US presidential campaign, I was on the floor as Hillary addressed the AIPAC conference in Washington, a truly frightening spectacle. Using the – false – premise of an Iranian attack on Israel, she said, «I want the Iranians to know that if I’m president, we will attack Iran. In the next 10 years, during which they might foolishly consider launching an attack on Israel, we would be able to totally obliterate them».

Oh really? Over Russia-Iran strategic cooperation? Over a progressively integrated SCO? Bring it on, Queen of War.