Skip to main content Skip to search
Secondary menu
Home » The Gaza-Ankara-Jerusalem Triangle: How Israel and Turkey Made Up on Gaza Above the Heads of Palestinians and Egyptians

The Gaza-Ankara-Jerusalem Triangle: How Israel and Turkey Made Up on Gaza Above the Heads of Palestinians and Egyptians 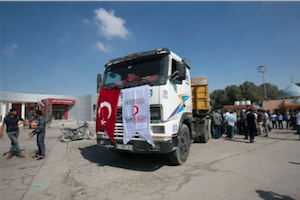 Whatever dividends the fresh Turkish-Israeli rapprochement will bring, it reveals something fundamental about the new Middle East: the number of unknown variables in this ever less predictable environment is steadily growing, and even the most arrogant and unrepentant leaders will have to eat crow from time to time in order to salvage their national interests. Leaders who stand by their words and their principles will be severely handicapped

BACKGROUND: Israel’s Prime Minister Benjamin Netanyahu apologized to the Turks for the killings of ten activists on the Mavi Marmara ship in June 2010, and President Recep Tayyip Erdoğan, who is at his best when censoring others, has now bowed his head to unpleasant realities twice in the space of a few days: first, when he accepted that a deal with the Israelis would leave the sea blockade around the Gaza Strip intact; and second when he apologized to Russian President Vladimir Putin for the downing of a Russian Su-24 fighter over Turkey in November 2015.

The Israeli-Turkish relationship during the past decades puts regional volatility in sharp relief. Their geopolitical roller-coaster ride, from guarded distance to intimate security cooperation, and then downward towards an abyss of mutual rejection and open threats – and now to a new understanding – is probably without example in bilateral relations between major players.

Of course, the Israeli-Turkish deal is partly a matter of crass interests coinciding. Israel and Turkey are not liked in the region and they have few allies. More important still in overcoming mistrust are Israel’s recent discoveries of natural gas and Turkey’s urgent need to diversify its energy portfolio. But the relationship is also enriched, and bedeviled, by the long historical relationship between Jews and Turks. Israel’s capital was ruled from Turkey’s capital for centuries and the Jewish national revival was conditioned on one of the great Turkish traumas, the demise of the Ottoman Empire. That same empire was a haven, if not always a heaven, for persecuted Jews from the 15th to the 20th centuries. And then, during the Turkish Republic, Jews lost their protected standing and became, along with other non-Muslim minorities, the object of despoilment and hostile official propaganda.

In the reconciliation deal, Erdoğan has sacrificed one of his most deeply felt convictions, that the Israeli marine blockade around the Gaza strip is illegitimate. He, who once threatened to send the Turkish navy to Gaza, is now accepting Israeli control over Gazan trade. Turkish aid to the Palestinians will be channeled via the Israeli port of Ashdod and subject to the usual security searches for undeclared steel, cement and bomb-grade chemicals. As Palestinian Parliament member Hanan Ashrawi put it: “Erdoğan has signed over Gazan sovereignty to Israel”.

IMPLICATIONS: In fact, this particular humiliation was so painful to Erdoğan and his Justice and Development Party (AKP) that it could not be acknowledged at home. On the day the news broke, the government mouthpiece Sabah declared in banner headlines that the Gaza blockade had finally been undone by Turkey. It appears that the Israelis had promised, as a non-written part of the deal, not to openly contradict such claims.

For Benjamin Netanyahu, the whole affair has been an equally bitter chalice. The apologies to Turkey and the US$ 21 million in reparations to the families of the victims of the 2010 Mavi Marmara boarding are the least of it. To Israeli nationalists, like Netanyahu and his voters, the pain of the Mavi Marmara killings comes not from remorse over the fate of the Turkish activists, whom they regard as little less than terrorists. Israel’s Minister of Education, Naftali Bennet from the settler’s party, who voted against the Turkish deal in the security cabinet, said paying compensation to “terrorists” was a dangerous precedent which will expose Israel to similar claims from other adversaries.

In fact, the hardest part of the Mavi Marmara drama has to do with Israeli military and national prestige. Netanyahu, himself a former commando fighter, is keenly aware of the huge embarrassment of the bungled boarding of the Mavi Marmara, which looked to the world like a Keystone cops' operation. It was obvious that the boarding of the “Ship to Gaza” cruise had been incompetently planned, or perhaps not planned at all. The outcome amounted to a huge own goal by Israel, playing into the hands of Erdoğan who – ever since the Israeli attack on Gaza 2008-2009 – had been eager to find a pretext for downgrading relations. In fact, the Turkish government’s generous support for the Islamist IHH movement, which organized the challenges to Israel’s sea blockade, would not have been made had Ankara wished to maintain the status quo with Israel. Another weird twist to the story is Erdogan´s recent attack on IHH, which is now upbraided for having run Turkey into trouble with the Israelis.

With its amateurish, hysteric and pointlessly violent attack on the Mavi Marmara – the ship could easily have been towed to an Israeli port and the passengers sent home without a bullet fired – Netanyahu’s government served Erdoğan, on a silver platter, what he had been looking for. It is ironic, and a marvelous testimony to the utter inscrutability of the Middle Eastern alliance patterns, that Erdoğan has now turned appeasement with Israel into his principal foreign-policy concern: the very same Erdoğan whose media made Israel’s name a synonym of genocidal evil; who hinted darkly at the menacing “international” forces and “interest-rate” lobbies behind the 2013 Gezi Park demonstrations and behind Turkey’s financial problems.

The day after the deal was made public, Erdoğan called the Palestinian President Mahmud Abbas and heard bitter words from him for having negotiated Palestinian concerns with Israel without so much as briefing Ramallah – even though the Jerusalem-Ankara deal specifically states that it is the Palestinian Authority, not Hamas, which shall administer Turkish aid to Gaza. Ahmad Yusuf, one of Hamas' top leaders in the West Bank, could not hide his disappointment that Turkey had not managed to achieve either the end of the sea blockade or Israeli acceptance of a Palestinian port in Gaza. But he did his best to excuse his Turkish protector: “The situation was very complex, and this was the best that our Turkish friends could manage under the circumstances,” he said.

Other Hamas voices wailed that Erdoğan and Turkey had reneged on their sacred promises to “accompany the Palestinians during the liberation of al-Quds (Jerusalem)”. But however inglorious the deal appears in the light of earlier, maximalist Erdoğan outpourings, it nonetheless has important positive aspects for Hamas.

Is Hamas pleased with what Erdoğan has achieved? There is no straightforward answer to the question, just as there is in fact no straightforward answer to what Hamas is. The political leadership inside Gaza will be happy to have a concrete, physical Turkish presence in the strip. Israel would be reluctant to strike at the Turkish desalination and power plans about to be erected. At the same time, the Turkish supplies via Ashdod, presented with much fanfare by the AKP government, will make little difference to the Gazans, since their imports even today come mainly via that route and are subject to the same scrutiny.

Beyond their feverish rhetoric about liberating Jerusalem, the Hamas leadership in the Gaza Strip want calm. It wants to consolidate its power monopoly in Gaza and rebuild the areas destroyed by Israel during the fighting in the summer of 2014. Turkish aid will of course be presented by Hamas as the fruits of its own foresight and clever diplomacy.

But Hamas’ political leadership inside the strip is no longer firmly in charge, as it was during the days of Hamas’ founder Ahmad Yasin. Hamas has a dangerously independent military wing, which invests millions in armaments, especially “attack tunnels”, with an eye to the next confrontation with Israel. The tunnels, which lead into Israel, have cost Israel dearly in civilian and military casualties. But it is apparently now only a matter of time before Israel will possess effective counter-measures. In view of this development, the pragmatists in the Hamas leadership suggest that the money spent on tunnels is a waste of resources. Yet the armed militants prevail, and here the internal Hamas power struggle connects with the larger regional picture: in order to carry on the extensive tunnel expansion – into Israel but also under the main cities of Gaza – military Hamas needs Iran. But Saudi Arabia is adamant in its ambition to sever all ties between Iran and Sunni governments and actors. Military Hamas resents this pressure, since its ties to Iran give it a parity with political Hamas. It values that parity even more than it values the tunnels.

An Israeli dream would be to neutralize military Hamas, via Saudi and Turkish pressure. Indeed, some Israeli security analysts believe that Israel should offer the Gazans a deep-water port in exchange for scrapping its tunnel-project – an idea which might produce a showdown between political and military Hamas. The expulsion of Hamas’ military wing from its offices in Turkey is part of the present deal.

CONCLUSIONS: In normal times the Egyptian regime, which controls the western passage out of Gaza into Sinai, would have put an end to the Erdoğan-Netanyahu deal. The Egyptian dictator, general Abdulfattah al-Sisi, regards Turkey, which beams Muslim Brotherhood radio propaganda towards Egypt, as a dangerous meddler. The Egyptian government, which came to power by means of a military coup against Erdoğan’s close ally, the Muslim Brotherhood, is regarded by the AKP regime as an illegitimate usurper. The Egyptians wanted very much to scuttle the deal, but they were not allowed. Egypt is not in a position to contradict its Saudi benefactors, and to the Saudis, al-Sisi’s and Erdoğan’s quarrel is a trifle, overshadowed by the existential need to push Iran out of Sunni lands.

Faced with a choice of allies, Turkey or Egypt, Israel would not hesitate. Israeli-Egyptian cooperation, not least in the struggle against Da’esh in Sinai, is comprehensive, if little known in its details.

But clearly the Turkish deal is also in Israel’s best interest, for its substance and for its convenient price. The prime motive behind the deal, as mentioned above, is to be found in both countries’ specific energy needs: Israel’s need to export new-found quantities of natural gas and Turkey’s need to alleviate its dangerous dependence on Russian gas. But underwater energy transport is a costly and long-term domain, which presupposes a stable political base. In order to harvest the fruits of the deal both countries, and both leaders, need to keep away from rash foreign-policy decisions. Large-scale Israeli attacks against Hamas, with civilian casualties in Gaza, would obviously endanger the deal, as would large-scale bloody unrest in the West Bank. It will be fascinating to observe whether the new relations between Turkey and Israel will take hold and become a cornerstone of a new status quo in the region, or if it will be remembered as just one more curious incident in the ever-unfolding Middle Eastern turmoil.

Nathan Shachar reports on Israel-Palestine, Turkey and Spain for the Swedish daily Dagens Nyheter. His latest book is The Lost Words of Rhodes, (Sussex Academic Press, 2013).