The Current Phase of Conflict in Syria 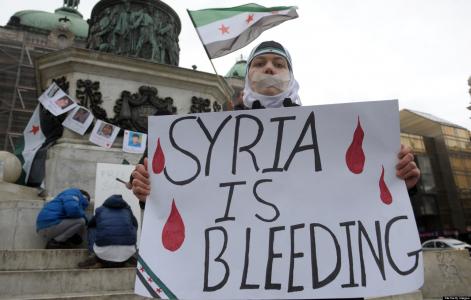 By Giancarlo Elia Valori
"Information Clearing House" - "Modern Diplomacy" - While we are writing this article, much of South Aleppo has now been liberated by Bashar al-Assad’ Syrian Arab Army. Jaish Al Fatah, which cooperates with the Al Nusra Front, namely the "Syrian section" of Al Qaeda, has now been ousted from the Southern districts of Aleppo and from most of the city suburbs. But it still keeps Idlib.

Jaish al Fatah is an "umbrella" organization of jihadists who fight against the Shiites, but not necessarily against Isis.
Assad’ Syrian Arab Army has completely liberated sixteen suburbs of Aleppo, while the anti-jihadist forces still attack some districts, including Karam al-Tarab and Amiriyah, so as to make Aleppo definitively safe and then move forward towards Idlib, still held by the jihadists.

Hence this is the picture of the current situation there.

Nevertheless, some pro-Turkish militants, backed by the Turkish army, have attacked the Kurdish People’s Protection Units (YPG) and the Syrian Arab Army in the village of Azrak, near Aleppo.

Turkey and the Kurdish YPG have clashed also in Sheik Nazir, Qert Weran and Oshali.

In short, Turkey keeps on creating protection buffer zones also in favour of Isis, which can use the Turkish flank to defend itself from the Syrian Arab Army and the Kurdish YPG.

In essence this is the Turkish, Kurdish and jihadist military framework of Greater Syria.

It is worth recalling, however, that on December 1 last President Vladimir Putin adopted the new Russian strategic doctrine.

This changes many factors.

Let us see its main aspects: Russia does not accept NATO’s expansion eastwards; it supports the agreements for a balanced reduction of armaments and it does not accept the "global missile defence system" that the United States are supposed to perfect and finalize within 2020.

In short, it is a doctrine designed to make the global strategic balance increasingly multipolar.

Furthermore Russia does not accept any US attempt to put pressure on it and reserves its right to militarily respond to military actions deemed unfriendly.

With reference to Syria, Russia’s ultimate goal is to build a broad international coalition to be defined within the UN framework.

The explicit fight against the jihad and everybody’s acceptance of a united, independent and intact Syria should be at the basis of this coalition.

Hence, on the Syrian military ground, the Syrian Arab Army and its Russian and Iranian allies are recording successes in North Aleppo, while the Russian aircrafts are bombing the ISIS rear-lines and have significantly reduced the Isis operating mass and materials.

Hence if the Russian air forces continue to carry out their operations, Bashar al-Assad’ Syrian Arab Army will be in a position to press victoriously on Idlib northwards and on Raqqa eastwards.

After the breakup of the jihadist front in north-east Aleppo, the defences of the moderate "insurgents", as the Americans call them, are supposed to collapse in the short term.

However, despite the many Turkish actions, Syria’s air responses - supported by Russia - have not allowed Turkey to reach its true goal in Syria, namely the creation of a Turkish enclave between Raqqa, Manbij and al Bab.

An emplacement that EU analysts consider “irrelevant”, as we will see later on.

Soon the jihadist pocket in Western Ghouta - the old oasis near which Damascus was founded, the area from which many jihadists will leave as "refugees" towards puerile Europe - will be eliminated.

And the fundamental political and strategic factor is that now the Egyptian forces are entering the Syrian region.

The reason is simple: President al-Sisi rightly believes that every jihadist success in Syria is a vital threat to Egypt.

The United States have always supported the Muslim Brotherhood - suffice to read the very detailed book by Ian Johnson, A Mosque in Munich, published in 2010.

Al-Sisi’s only other option was turn to Russia.

Hence the US strategy of negotiating with the Islamic fundamentalism and de facto relinquishing the US traditional friendship with the Maghreb countries and with Iraq, the country "liberated" a few years ago, was formidable in its inanity.

Hence now Egypt is entering the Syrian scene, siding with Russia and Bashar al-Assad’s alliance with Iran - an intra-Islamic religious paradox which has its own perfect strategic logicality.

Stressing Islam’s religious differences too much makes us forget the extreme pragmatism - not to say cynicism - of the Arab and Islamic political elites.

Hence a few weeks ago a high-level Egyptian delegation had arrived in Syria to discuss the operations that the Egyptian forces should carry out under the Russian and Syrian command.

Some sources maintain that Egyptian aircrafts and helicopters are already deployed in the Hama base.

And it is worth recalling that Egypt has independent access to Syria by sea.

The two "Mistral" ships that France had built for Russia and that it could not sell to it, were later sold to Egypt.

Ironically, those two ships - not sold to Russia due to the current restrictions on trade with this country - will go to Syria to fight in favour of Russia and Assad, thanks to the EU stupidity and the inability of whole Europe to think strategically.

Each of the two French "command and power projection" frigates can accommodate a battalion of 900 soldiers with all their equipment.

Hence a situation would materialize in which a brigade - protected by the Russian air force - is fully autonomous and can operate freely on Syrian territory, being also equipped with Russian attack helicopters.

Therefore the Egyptian forces would be the real "game changer" in the Syrian war, because even the Hezbollah brigades and the Iranian "volunteers" need the Syrian support and logistics.

Hence Egypt can carry out its operations in Syria on its own, in close coordination with Russia and Bashar al-Assad’s forces.

Numerically the Iranian situation in Syria is as follows: 4,000 Iraqi units and 4,000 Shiite units sent directly from the Shiite republic, coordinated by 400 Pasdaran operational units in Iran.

Hezbollah has also sent 2,000 units of its special forces, namely "Ridwan" units, from the Lebanon.

In this particular situation, the 4,000 Egyptian units would be a significant increase of military and operational efficacy.

Obviously no one could prevent Egypt from taking part in the Syrian war, considering that forces and soldiers pass through the Suez Canal.

This is a real blackmail even for the countries which fund and support the jihad, since anyway their oil passes through the Egyptian waterway.

Hence this new complexion of anti-jihadist forces would allow a fast and powerful attack on Raqqa, which would be final and would close the game in Syria, except for some jihad "remnants" in the South.

Furthermore, President-Elect Donald Trump does no longer intend to support the "good" and "moderate" jihadists - hence the Turkish and Saudi game could soon be put to an end.

The era of President Obama - who only aimed at eliminating Assad and did not view the jihad as a real threat which, furthermore, strangely operated ever more often with "US-made” weapons - is over.

The European Union has published a new document on Syria, entitled “The First Trump Test: European Policy and the Siege of Aleppo”.

The EU analysts maintain that unfortunately President Assad is still there and so it is impossible not to accept his political presence.

Hence they think that we must swallow the bitter pill of accepting Assad still in power, as if they could send him away from there - which is not the case - and as if the jihad were an irrelevant operation.

Finally, EU analysts maintain that if Turkey remained interested in its Northern corridor, so as to counter the Kurds, it should no longer create many problems in putting in place a vague, bombastic and non-existent "transition", which should be managed by the Europeans, who pretend to have powers and abilities they do not have and take actions for no reason or purpose.

We all know, however, that Turkey wants its corridor to trigger off a second fight against the Kurds and Assad - which is not harmless at all, as the EU strategy claims.

The winner does not need to sit at the negotiating table, which the losers need to reduce damage.

Hence it is not clear who should participate in the "transition" led - alas - by the Europeans.

Finally the EU analysts that drafted the Document on Syria believe that currently Europe should resume President Obama’s Syrian policy, namely to reach any bad deal so as to put an end to violence and help the Syrian people.

Nevertheless bad deals worsen the situation - and then, what about jihadists? Are they to be blamed for the Syrian disaster or rather the Russians and the "tyrant" Assad?

It seems that the EU still does not consider the holy war which, however, will certain not pay heed to the EU "humanitarian" requests.

Yet another proof of European inanity while, as President Putin maintains, it would be enough not to provide European aid to President Erdogan for three months and his regime would collapse.

Certainly the European Union will do nothing of this sort. Simply it will take no action at all.

Professor Giancarlo Elia Valori is an eminent Italian economist and businessman. He holds prestigious academic distinctions and national orders. Mr Valori has lectured on international affairs and economics at the world’s leading universities such as Peking University, the Hebrew University of Jerusalem and the Yeshiva University in New York.

He currently chairs "La Centrale Finanziaria Generale Spa", he is also the honorary president of Huawei Italy, economic adviser to the Chinese giant HNA Group and member of the Ayan-Holding Board.

The views expressed in this article are the author's own and do not necessarily reflect Information Clearing House editorial policy.