The Collapse of Western Democracy 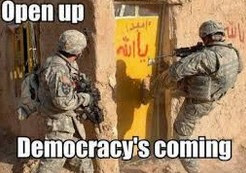 "Information Clearing House" - Democracy no longer exists in the West. In the US powerful private interest groups, such as the military-security complex, Wall Street, the Israel Lobby, agribusiness and the extractive industries of energy, timber and mining, have long exercised more control over government than the people. But now even the semblance of democracy has been abandoned.

In the US Donald Trump has won the Republican presidential nomination. However, Republican convention delegates are plotting to deny Trump the nomination that the people have voted him. The Republican political establishment is showing an unwillingness to accept democratic outcomes.
The people chose, but their choice is unacceptable to the establishment which intends to substitute its choice for the people’s choice.

Do you remember Dominic Strauss-Kahn? Strauss-Kahn is the Frenchman who was head of the IMF and, according to polls, the likely next president of France. He said something that sounded too favorable toward the Greek people. This concerned powerful banking interests who worried that he might get in the way of their plunder of Greece, Portugal, Spain, and Italy. A hotel maid appeared who accused him of rape. He was arrested and held without bail. After the police and prosecutors had made fools of themselves, he was released with all charges dropped. But the goal was achieved. Strauss-Kahn had to resign as IMF director and kiss goodbye his chance for the presidency of France.

Curious, isn’t it, that a woman has now appeared who claims Trump raped her when she was 13 years old.

Consider the political establishment’s response to the Brexit vote. Members of Parliament are saying that the vote is unacceptable and that Parliament has the right and responsibility to ignore the voice of the people.

The view now established in the West is that the people are not qualified to make political decisions. The position of the opponents of Brexit is clear: it simply is not a matter for the British people whether their sovereignty is given away to an unaccountable commission in Brussels.

Martin Schultz, President of the EU Parliament, puts it clearly: “It is not the EU philosophy that the crowd can decide its fate.”

The Western media have made it clear that they do not accept the people’s decision either. The vote is said to be “racist” and therefore can be disregarded as illegitimate.

Washington has no intention of permitting the British to exit the European Union. Washington did not work for 60 years to put all of Europe in the EU bag that Washington can control only to let democracy undo its achievement.

The Federal Reserve, its Wall Street allies, and its Bank of Japan and European Central Bank vassals will short the UK pound and equities, and the presstitutes will explain the decline in values as “the market’s” pronouncement that the British vote was a mistake. If Britain is actually permitted to leave, the two-year long negotiations will be used to tie the British into the EU so firmly that Britain leaves in name only.

No one with a brain believes that Europeans are happy that Washington and NATO are driving them into conflict with Russia. Yet their protests have no effect on their governments.

Consider the French protests of what the neoliberal French government, masquerading as socialist, calls “labor law reforms.” What the “reform” does is to take away the reforms that the French people achieved over decades of struggle. The French made employment more stable and less uncertain, thereby reducing stress and contributing to the happiness of life. But the corporations want more profit and regard regulations and laws that benefit people as barriers to higher profitability. Neoliberal economists backed the takeback of French labor rights with the false argument that a humane society causes unemployment. The neoliberal economists call it “liberating the employment market” from reforms achieved by the French people.

The French government, of course, represents corporations, not the French people.

The neoliberal economists and politicians have no qualms about sacrificing the quality of French life in order to clear the way for global corporations to make more profits. What is the value in “the global market” when the result is to worsen the fate of peoples?

One wonders how long before all Western peoples conclude that only a French Revolution complete with guillotine can set them free.

Powerful Interest Groups Have Triumphed Over The Rule Of Law

This from a reader:

“It was reported this morning that recently the jet that Attorney General Loretta Lynch was on just happened to be on the same ramp as the one carrying Bill Clinton.

“And somehow each party apparently knew of the presence of the other.

“And they were in close enough proximity that Bill and Loretta met privately in one of the jets.

“The FBI (a department under the AG) is investigating Hillary’s emails as a criminal violation of the espionage act and the funding of the Clinton Foundation by foreign interests.

“Wonder who’s jet they met on? Did the AG go to Bill’s jet? Wouldn’t that be particularly unusual? Did Bill go over to the AG’s jet, and if so why would the AG allow it and precipitate such a conflict of interests?”

Here is confirmation that this meeting did occur:

There was a half hour meeting on the AG’s plane. Watch the news video from ABC 15: