THE RISE AND FALL OF FETHULLAH GÜLEN IN TURKEY 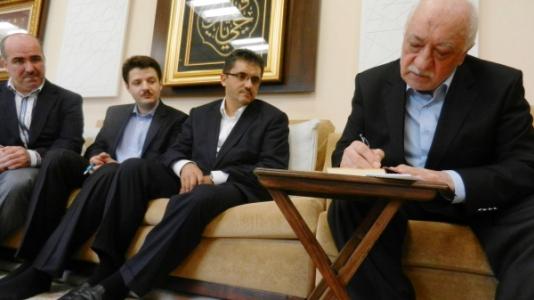 Many people around the world heard the name Fethullah Gülen and the word Hizmet probably for the first time on 15 July 2016, when a fraction from the Turkish military tried to topple the elected government in Turkey.

What happened during that night was broadcasted to the international community where the Turkish President, Recep Tayyip Erdoğan, addressing to Turkish people via Facetime asking them to hit on the streets against the ongoing coup attempt. During his message Erdoğan pointed Fethullah Gulen who is in self-proclaimed exile in Pennsylvania as the one who masterminded the coup.

In fact, President Erdogan and Fethullah Gulen were used to be very good allies against military tutelage and Kemalist establishment in Turkey up until 2013 when Gezi Park protests started to create a division between the both. Despite Gulen’s tango with president Erdogan and many other political executives in Turkey, his story with political elites dates back to early 80s. In that regard, one can argue that Gülen and his work begun to develop in Turkey mainly during the ’80s, particularly after the military coup on 12 September 1980. The Generals who took over the country’s government considered Hizmet as a “threat” to national security but it was the then PM Turgut Ozal who provided certain political protection for Gulen and backed up his activities. In addition to Ozal, Süleyman Demirel, Tansu Çiller, and Bülent Ecevit were among the heads of executive who tolerated Hizmet’s rise within the civic and public domain in Turkey.

The landmarks of Gülen’s “rise” and “fall”

The following list includes events that have occurred since 2004. This collection of incidents are very decisive to understand the the rise and fall of Gülen Movement in Turkey;

1. The National Security Council (MGK) meeting on ​​25 August, 2004chaired by Turkish President Ahmet Sezer. Erdoğan participated to the meeting as the Prime Minister. In the meeting it was decided to recommend the AKP government to take effective measures that would prevent the infiltration of the Gülenists in state bodies. At the time, Erdoğan faced pressure from two sides; a) from the USA because of the war in Iraq and b) from the military because of the secular characteristics of the Turkish army that was at odd with any Islamist government ruling the country. The army was forcing Erdoğan to profile and isolate Gülenists whom the military considered to be AKP’s best ally.

2. The General Assembly by the AKP on 1 May, 2007 when Erdoğan decided to go for early elections. Erdoğan’s decision came after the army issued an online statement on 27th of April – the so called e-memorandum, which was against President Gül’s candidacy for presidential election because of the reason that his wife was wearing headscarf. Then, Erdoğan turned to more conservative voters in order to secure the victory in the elections, gaining a significant percentage of the vote. Few months later, the first arrests regarding the Ergenekon case started.

3. 2008 was a crucial year for AKP’s relations with Gülen. Possibly, 2008 was the year when Erdoğan understood how essential Fethullah Gülen was for the survival of his party. The opening of the closure case against the ruling party in March and Gülen receiving his Green Card in USA were two interconnected crucial developments. In May Prosecutor Zekeriyia Öz, who was known to be one of the Gülen’s supporters in the judiciary, opened the Ergenekon case. In July the Constitutional Court ruled against AKP’s closure. As a result, Hizmet hinted that the decision not to close the AKP was due to the influence it had within the judicial system.

4. The constitutional referendum on 12 September, 2010. Mass media that belonged to the Hizmet movement openly supported the constitutional amendment led by then PM Erdogan. Fethullah Gülen himself urged his followers to go to the polls and vote in favor. Following the changes that were brought by the constitutional amendment in the judiciary; judges who were allegedly the followers of Gülen started to have more posts in the judicial system. It is worth mentioning that few months before the amendment a small rift was created between the two men due to the Gaza flotilla event where Erdoğan and Gülen had a different approach on how to manage the crisis with Israel.

5. The parliamentary elections on 12 June, 2011. Erdoğan’s AKP received 49.8% and got 327 out of the 550 seats in Turkish National Assembly. Then, members of the AKP who were allegedly closer to Hizmet movement contested that approximately 15% of AKP’s electoral base was generated by the movement, demanding that they should have been represented by more than two deputies. This provoked a debate within Hizmet whether Gülenists should have bigger representation in Turkish politics.

6. One of the most important occurrences – and probably the cornerstone to the rift between Gülen and Erdoğan – is the one that follows. On 7 February, 2012, the prosecutor who had initiated investigations on the Ergenekon case, decided to summon Hakan Fidan, spymaster of Turkey’s Secret Services (MIT), to testify about contacts he had with guerillas from Kurdistan Workers Party (PKK) in Oslo. Those talks were carried out under Erdoğan’s permission in order to reach a solution regarding the armed conflict with the PKK that divides the country. Erdoğan considered that summoning Fidan was a serious threat against himself.

7. On 1 June, 2013 Gezi Park demonstrations in Istanbul became nationwide protests against the AKP’s oppression and the violation of fundamental rights and freedoms. Wild images from the demonstrations in Turkey were broadcasted around the world and Erdoğan declared publicly that the “parallel structure” of Gülen, which wanted to overthrow the elected government, was behind the protests. Few months after on 17 December Turkey was shaken up by a major graft-scandal with international ramifications where not only a number of then-cabinet members but also Erdogan son – Bilal Erdogan was also involved. Erdoğan accused the police and the judicial system that launched the operations as members of Gülen Movemnet. On 25 December, 2013 Erdoğan reshuffled the government in order to remove the ministers who were under extreme public pressure due to their involvement in corruption scandal.

8. On 30 April, 2014 MGK stated that the Gülen movement is “a terrorist organization trying to overthrow the elected government.” On 19 Januarya number of trucks carrying military equipment to Syria by Turkish intelligence service (MIT) were stopped. MIT’s agents who accompanied the truck said that the police, despite the lawful search warrant, had no right to control the trucks. Photos and videos from the research and the findings were made public a year after by the newspaper Cumhuriyet. In JulyErdoğan started a “witch hunt” aiming to remove all followers or sympathizers of Fethullah Gülen from the state apparatus. On 10 AugustErdoğan was elected President of the Turkish Republic.

9. Coup attempt in Turkey, 15 July 2016. The attempted coup was defeated after millions of Turkish people hit on the streets after the call made by President Erdogan. In Yenikapi demonstration all political parties agreed that they should combat the putchists. Since July more than 100.000 persons have been removed from Turkish public sector with the charges of belonging or supporting to the FETO “terrorist organization”, a term coined by president Erdogan to name Gülen Movement. Furthermore, Turkish government confiscated properties of larger size private enterprises and financial institutions that support Gülen Movement’s activities, such as Boydak Holding and Asya Bank. It is worth to underline that despite the fact that from the first moment Erdoğan accused Gülen of being the mastermind behind the coup attempt, up until now and despite the arrests and the purges made inside the Turkish army, the generals who led the coup attempt are yet to be found.

All the above demonstrate that the persecution of Hizmet and its members before and after the coup attempt in Turkey were supposed to happen. High-ranking government officials even confessed that the ruling party already had lists with the names of people linked to Hizmet. In addition, Erdoğan make regular calls on the US for Gülen’s extradition while he accuses west of helping an organization he considers to be terrorist.

Unfortunately, in the name of “the fight against terrorism” fundamental rights in Turkey are at stake. As European Commission states in the annual progress report on Turkey there is a serious backsliding in the protection of key liberties in the country. President Erdoğan wants so desperately to get rid of Gülen, so that the first thing he did after declaring “state of emergency” in the country was to close Gülen’s prep-schools that gave valuable education to the low income people.

However, the major question that exists is what is going to happen next, how far Erdoğan will go in order to eradicate Gülen movement from the society. In my opinion, it is too early to tell what’s going to happen. On the one hand Gülen has a big network all over the world and on the other hand Erdoğan cannot tolerate anyone who is “critical” to his regime. There are, however, two major factors that we have to take into consideration. First and foremost Erdoğan has to find concrete proof that Gülen himself was behind the coup attempt. Proving with evidence that Gülen was the mastermind behind July’s events will be a blast to Hizmet. Secondly, regardless of what Erdoğan might do, there is as well the big question about Gülen’s health. It is known for years that Gülen’s health is deteriorating and more importantly that there is none to succeed him as leader of Hizmet. If Gülen’s health isn’t getting any better and he passes away there is no certainty about the movement’s future.