A large explosion has struck close to a military compound in the Syrian capital, Damascus, near a hotel used by the UN's observer mission.

The intended target was unclear but Syrian state TV reported that three people had been hurt in the blast and none of them were UN monitors.

Fighting has broken out between the army and rebels in another part of the capital, activists and state media say.

Clashes were reported in Mezzeh, near the prime minister's office.

According to activist groups, shelling was also taking place in the Qaddam and al-Asali districts.

UN humanitarian chief Valerie Amos, who is in Damascus, tweeted that she was unable to access the Damascus suburb of Douma, and could hear the sounds of shelling.

State television said Wednesday's blast had been caused by a bomb near a fuel truck planted in a car park near the hotel, but other reports suggested it had been an improvised explosive device (IED).

"There was a huge explosion and a fireball, and soldiers were thrown to the ground by the blast," a military officer told the AFP news agency.

Russian journalist Oksana Boyko told the BBC the explosion happened "at an army garage adjacent to the hotel".

Images from the scene showed several charred vehicles, including a tanker which had had its rear section blown out. UN vehicles in the nearby car park were seen covered in dust and debris. 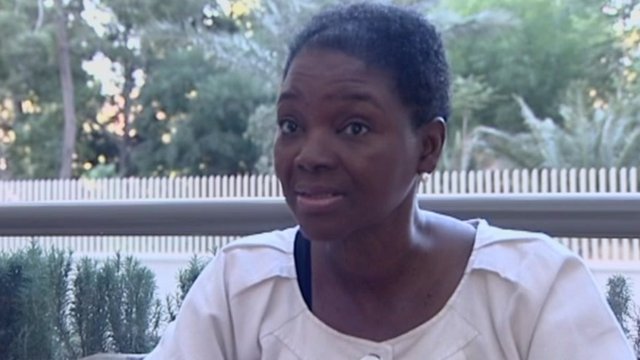 Valerie Amos, UN: "I was here in March and the situation has clearly got worse"

The high-security Dama Rose area is home to several government and military buildings.

A senior member of the main rebel force, the Free Syrian Army (FSA), told the AFP news agency it had carried out the attack and that it had been "designed to go off at a meeting of army officers and members of the shabiha [pro-government militia] which decides on daily operations in Damascus".

His claim could not be immediately verified.

"Our primary goal is to secure the observer mission team and thank God no one from this mission has been hurt since it arrived in Syria," he said.

At first Damascus remained relatively quiet after the uprising against President Bashar al-Assad began in March last year, but the violence has spread there in recent weeks. 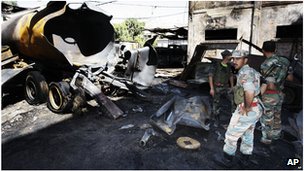 Meanwhile Baroness Amos, during her visit to Syria, has said it should be made easier for aid to be delivered to civilians.

She said the Syrian government had made clear that it wanted to stay in control of the aid response effort, and was concerned that aid from the UN could be used to support the armed rebel groups.

The Syrian Arab Red Crescent were "doing a good job but their capacity is stretched", she added, and called on the government to allow more international and national NGOs to operate in Syria.

Later on Wednesday, the Organisation of Islamic Co-operation (OIC) is expected to suspend Syria's membership over the violence.

At their meeting in the Saudi city of Mecca, the 57-member organisation OIC is expected to endorse a statement put forward by its members' foreign ministers that Syria should be suspended because of its "obstinacy" in seeking a military resolution to the uprising.

A draft copy of the proposal seen by AFP demands that the authorities "immediately end all acts of violence" while defending Syria's "unity, sovereignty, independence and territorial integrity".

Iran, Syria's only regional ally, opposes the measure - it said in recent weeks that Syria was a vital part of a regional alliance which Tehran would not allow to be broken.