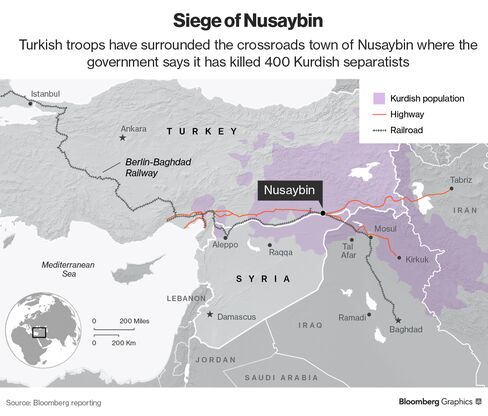 As President Erdogan consolidates power in Ankara, separatists 1,000 kilometers away test the limits of his reach.
The curfew in this former Roman and Persian imperial outpost was announced the modern way, online, but word quickly spread like it has here for three millennia. By dawn, tens of thousands of people were gone.
For separatist Kurds in Turkey, curfew is code for crackdown. So when one was declared in Nusaybin on the Syrian border in March, most of its 90,000 residents ran with whatever they could carry.

Tunnels, Snipers
In the heart of the city, government troops are finding things they didn’t expect. While Turkey has conducted similar operations in other cities near Syria, which is mired in its own endless war, this one has revealed an evolution in PKK tactics and capabilities, three security officials said.
The army, which moved on Nusaybin after PKK car bombings in Ankara, was stunned, for example, at the extent of the group’s network of underground tunnels, allowing snipers equipped with modified Russian rifles to move undetected, the officials said. The vast ammunition stockpiles and number of improvised bombs that are triggered by motion detectors and hidden in everything from Korans to kitchen walls were also a shock, they said.
A member of the armed group Patriotic Revolutionary Youth Movement (YDG-H), a youth division of the Kurdistan Workers' Party, PKK, prepare his weapons in Nusaybin.
A member of the armed group Patriotic Revolutionary Youth Movement (YDG-H), a youth division of the Kurdistan Workers' Party, PKK, prepare his weapons in Nusaybin. Photographer: Cagdas Erdogan/Getty Images
The government says more than 400 militants have died in the siege so far, compared with almost 70 of its own forces, mainly from booby traps and sniper fire. Some 400 barricades and 1,000 bombs have been destroyed.
“Nusaybin is strategically located and the PKK invested heavily there during the now-failed peace process to establish a loyal canton-like government,” said Michael Gunter, an author of several books about Kurds who teaches at Tennessee Tech University. “This greatly angered Turkish authorities.”
Fleeting Victory
The Kurds, who dominate swaths of Turkey, Syria, Iraq and Iran, have been seeking to govern themselves for generations. They already run a regional government in Iraq and achieved a breakthrough in Turkey last June, when the HDP won 13 percent of the national vote, enough to join parliament for the first time and deprive Erdogan’s AK Party of a majority.
Residents walk past a burned truck at the entrance to Nusaybin.
Residents walk past a burned truck at the entrance to Nusaybin. Photographer: Bulent KilicAFP/Getty Images
But their victory didn’t last: Peace talks broke down, violence resumed and a surge in nationalist sentiment helped the AKP regain its majority in November. And last week, parliament stripped most HDP lawmakers of their legal immunity, allowing for them to be prosecuted on terrorism charges.
Now Erdogan, who has ruled for 13 years, is shuffling premiers as he prepares to introduce legal changes that will strengthen the presidency.
“We will continue our struggle without any deviation or relaxation” –Turkish PM Binali Yildirim
His campaign to centralize power is intensifying along with the attacks on the PKK, which have displaced as many as 350,000 people since last July, the most since the government razed 4,000 villages in the 1990s. About 5,000 rebels have been killed in clashes in the southeast and in airstrikes in northern Iraq in the period, while 438 security personnel, including 296 soldiers, have died, according to the state-run Anadolu news service.
“We will continue our struggle without any deviation or relaxation,” Turkey’s newly appointed prime minister, Binali Yildirim, told reporters Wednesday.
‘Be Quick’
The extent of the damage inflicted on the city has also startled the ruling AKP party. Lawmakers back in the capital are rushing to develop plans to restore services and rebuild homes as soon as the fighting ends, which officials expect will be within a month at most.
“We have to be quick,” Enver Hekimoglu, an AKP lawmaker, said in an interview in parliament. “Images of destruction are not good.”
Kurds, who emerged from Mesopotamia, make up about a fifth of Turkey’s 78 million people. Their language is barred in schools, parliament and other official places over fears its use would further stoke tensions. The U.S. and the EU consider the PKK a terrorist group for targeting civilians, but they’ve also criticized Turkey for its treatment of Kurds in general.
Angry Youth
For many young Kurds who grew up after the worst of the fighting in the 1990s, HDP’s rise as a Kurdish political movement has been more compelling than PKK’s militancy. But as the siege of Nusaybin and other actions drag on, that will change, according to Berat Yasli, a 22-year-old university student.
“I don’t think the children of people who are getting killed in clashes today will have any kind of allegiance to the state in the future,” Yasli said in the regional capital Mardin, sitting on the grass in a park across the street from the governor’s office. “Their hatred will inevitably turn into action.”
A girl makes her way through barricades at Nusaybin.
A girl makes her way through barricades at Nusaybin. Photographer: Bulint Kilic/AFP/Getty Images
For others, the issue is as much economic as it is emotional.
The war with the PKK has cost Turkey about $400 billion over the past three decades, according to government estimates. But those numbers don’t fully capture the economic devastation wrought to Kurdish communities, many of which rely on trade with fellow Kurds in neighboring states, mainly Iraq.
Broken Dreams
And more fighting will further hurt an economy already struggling with the inflow of refugees from Syria, attacks by the Islamic State and tensions with Russia. Foreign tourist arrivals, a key source of revenue, dropped for an eighth-straight month in March, the longest streak since at least 2006.
A teenager named Tayfur said the attack on Nusaybin prevented him from finishing high school, jeopardizing his goal of attending university. The continued violence, he said, makes it impossible to plan for the future.
“We fled in a panic when they declared the curfew and now I have to labor to support my father,” Tayfur said in the shade of a tree as the sun beat down on central Mardin. “I used to dream of being a teacher.”