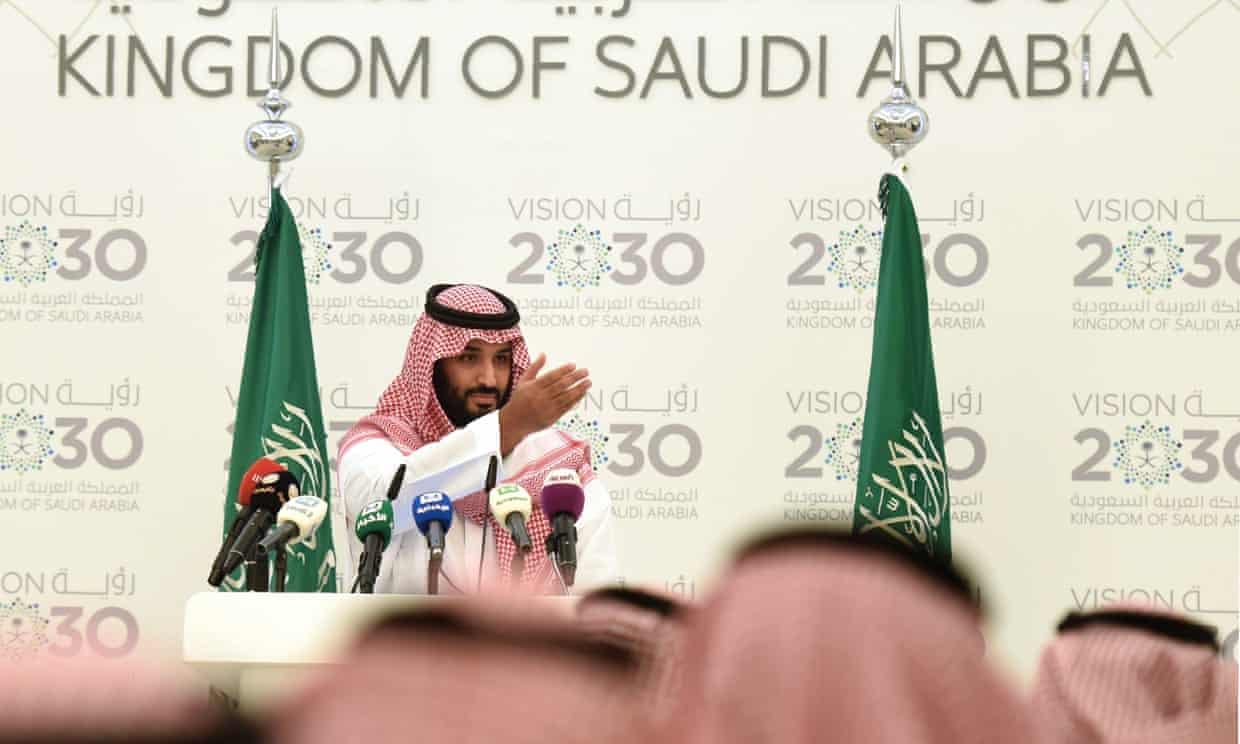 King Salman bin Abdulaziz announced cabinet backing for the Saudi Vision 2030 plan in a brief televised announcement on Monday in which he called on his subjects to work together to ensure success. Shares on the Riyadh stock market rose sharply.

Under Salman, who came to the throne in early 2015, economic strains have been the backdrop to rising tensions with regional rival Iran, the threat from Islamic State, the wars in Syria and Yemen, and a sense that the kingdom’s decades-long relationship with the US is fraying.

Mohammed bin Salman, the king’s son and deputy crown prince, gave details of the economic reforms in a pre-recorded TV interview – part of a proactive media strategy designed to advertise a sense of dynamism and change in response to oil prices, which have fallen from more than $100 a barrel in early 2014 to about $40 this month.

Elements of the long-heralded 15-year blueprint include the creation of a $2tn Saudi sovereign wealth fund, as well as strategic economic reforms called the National Transformation Programme.

Bin Salman confirmed that the kingdom would sell off about 5% of Aramco, which will become a holding company with subsidiaries listed via an initial public offering. Oil was a “dangerous” addiction, he told al-Arabiya TV. “The vision doesn’t need high oil prices,” he added. “We can live without oil in 2020.”

Aramco is estimated to be the world’s most valuable company, while the wealth fund would be the largest of its kind. Overall the plans aim to make the Arab world’s largest economy depend on investments rather than energy to fill government coffers in the years to come.

“The vision is a road map of our development and economic goals,” the prince said. “Without a doubt Aramco is one of the main keys of this vision and the kingdom’s economic renaissance.”

The fund will include current assets of around $600bn, as well as returns from the sales of Aramco shares and state-owned real estate and industrial areas estimated to be worth $1 tn.

Bin Salman, 30, is not only young in a country long ruled by old men but famously energetic and assertive. He seems genuinely popular but is also resented for his unprecedented concentration of power – as defence minister and chairman of the Council of Economic and Development Affairs. Critics call him reckless – especially over the war in Yemen.

Economic reform has often been discussed before but the sense of urgency has grown since the government ran a record budget deficit of nearly $100bn last year. Plans to boost non-oil revenues with taxes will take years to have an impact, leaving spending cuts and foreign investment as the main way to bring state finances under control.

In recent years Saudi Arabia has relied on oil revenues for about 90% of its budget. Earlier this month it took out a $10bn five-year loan from a consortium of global banks – its first sovereign loan since 1991. The new strategy builds on the work of several prominent international consulting firms, who have been paid $1.25bn in fees this year.

Subsidy cuts, already under way, look set to be challenging, with Saudis used to cheap petrol, water and energy – while polls show they still expect them to continue. Bin Salman said the reforms are intended to eliminate housing and unemployment problems and ensure help reaches those most in need.

Last Saturday, the king sacked the water and electricity minister, who had drawn criticism for his handling of price increases, including a suggestion that citizens upset over high water bills dig their own wells.

Social factors are a key driver for the new policy. With half the Saudi population under 25, job creation is vital if the kingdom – which has no national representative institutions – wants to avoid the social unrest that has fuelled Arab spring protests across the region. But the introduction of even indirect taxes may lead to demands for change that could undermine the autocratic system.

A “green card” system is to be launched within five years to allow expatriate Arabs and Muslims to live and work long-term in the country, Bin Salman said. Tourism – apart from the annual hajj pilgrimage – and mining would be used to generate new revenues. A holding company for military industries would also be set up.

Bin Salman had suggested earlier that what Saudi Arabia was planning was similar to the Thatcher-era privatisation of state industries in Britain in the 1980s.

Experts and analysts have called this the biggest economic shakeup since the founding of Saudi Arabia. “The vision and ambition is out there and the proof now will be on the execution and the ability to continue to amass support from society in general and the business community specifically,” John Sfakianakis, director of economics at the Gulf Research Centre in Riyadh told the Guardian.

“Due to Mohammed bin Salman’s age, pace and sense of accountability, society is embracing these plans. Now is the time for big economic changes that the country hasn’t embarked on since 1932. The dynamism and determination to deliver has not been seen before and Bin Salman and his team know they have to deliver. Economic necessity dictates that Saudi Arabia reforms now.”

It is unclear whether the economic shake-up will lead to the kind of social changes many believe are needed to truly modernise the country: allowing women to drive, for instance, opening up the legal system, or ending the kind of human rights abuses that attract far more attention abroad than in the kingdom itself.