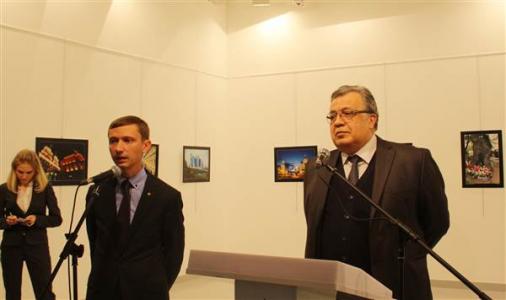 His last words before being shot by Turkish police officer Mevlüt Mert Altıntaş from his back were that “It is always easy to destroy, but difficult to construct,” on the opening of a Turkish-Russian photograph exhibition in Ankara on Dec. 19 in the in the evening.
Before firing his pistol, the attacker shouted slogans at him about children killed in Aleppo because of Russia in Turkish and broken Arabic (which sounded similar to Al Nusra rethoric, but not exactly so according to some security analysts) and said “Neither you, nor me are going to leave here alive.”
The police immediately sealed the building of the Arts and Culture Center of the municipality of Ankara’s Çankaya district and evacuated the civilians. This is supposed to be one of the maximum security areas in Turkey. In the 50 meters radius, there are the U.S., German and Austrian embassies, the Ankara Chamber of Industry, the Banking Regulation and Supervision Agency (BDDK), the Chief Prosecutor’s Office of the Court of Appeals and the Russian Trade Office. It is near to the Atatürk Boulevard, where Prime Minister passes every day, sometimes more than one time, to go to his office.
But if you carry a police badge, like this young police officer, you do not have any difficulty in entering security areas. There are claims that he might be a member of the secret network of Fethullah Gülen, the U.S.-resident Islamist preacher who is accused of masterminding the July 15 coup attempt, but then how on earth he might have saved himself from mass dismissals in wake of it.
When the attacker shot and killed the Russian ambassador, Turkish Foreign Minister Mevlüt Çavuşoğlu was aboard a plane on his way to Moscow to attend a meeting between foreign ministers of Russia, Turkey and Iran on the situation in Syria. The attack was carried out right before it, but Russia said the meeting will be held as planned.
Turkish President Tayyip Erdoğan and Russian President Vladimir Putin made public statements almost at the same time and denounced the attack as one targeting the bettering relations between the two countries.
Erdoğan also said that he accepted a suggestion by Putin to have a joint security team to investigate the murder.
In his statement Putin said that Russia wanted to know who was behind the attack.
If the attacker could be captured unharmed, or at least wounded, it would be much easier to get information from him during the interrogation and prosecution.
But in a small building, against a person carrying only a pistol, the police did not chose methods like using tear gas, or shooting at his legs, or simply talking him to surrender, but “neutralized him during a clash,” as Minister Soylu put it in a statement nearly three hours after the killing- something which must be investigated together with the investigation of the murder.
Karlov’s murder has not only taken the dimension of terrorism a level up in Turkey but is likely to have consequences in Turkey’s international relations and in the political balances in the Middle East, especially if the perpetuators of the murder will not be spotted -sooner the better- and approved by Russians.
Turkey failed to protect the life of a diplomat, who was under its responsibility. Karlov was the first ambassador assassinated in Turkey. That is a shame for Turkey. It is the responsibility of the government to move this burden from the shoulders of Turkey and the Turkish people.