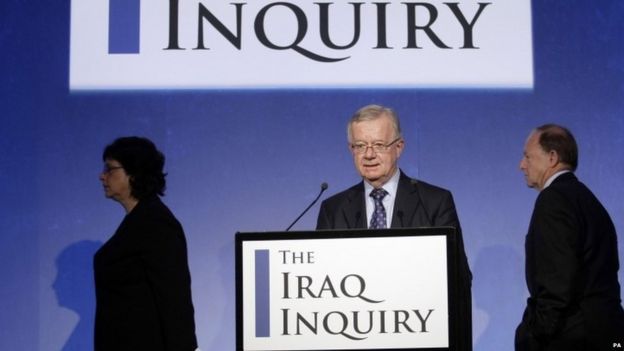 Project Syndicate, Richard Haas
NEW YORK – Seven years, 12 volumes of evidence, findings, and conclusions, and one executive summary later, the Report of the Iraq Inquiry, more commonly referred to as the Chilcot Report (after its chairman, Sir John Chilcot), is available for one and all to read.

Few people will get through all of it; the executive summary alone (well over 100 pages) is so long that it calls for its own executive summary.
But it would be a shame if the Report were not widely read and, more important, studied, because it contains some useful insights into how diplomacy operates, how policy is made, and how decisions are taken. It also reminds us of the centrality of the decision to invade Iraq in 2003, and of the aftermath, for understanding today’s Middle East.
In the run-up to the Alliance’s Warsaw summit, John Andrews assesses the views of Wolfgang Ischinger, Yuriko Koike, Javier Solana, and others on the three main challenges it faces.

A central theme of the Report is that the Iraq War did not have to happen, and certainly not when it did. The decision to go to war was partly based on faulty intelligence. Iraq constituted at most a gathering threat, not an imminent one. Alternatives to using military force – above all, strengthening Turkey’s and Jordan’s lackluster enforcement of and support for the UN sanctions designed to pressure Saddam Hussein – were barely explored. Diplomacy was rushed.
Making matters worse was that the war was undertaken without sufficient planning and preparation for what would come after. As the Report rightly points out, many in both the US and British governments predicted that chaos could emerge if Saddam’s iron grip were removed. The decisions to disband the Iraqi army and to bar all members of Saddam’s Ba’ath Party (rather than just a few of its leaders) from positions in the successor government were huge mistakes. Iraq was not just a war of choice; it was an ill-advised and poorly executed policy.
Much of the Report focuses on British calculations and then-Prime Minister Tony Blair’s support for US policy. The decision to associate the UK with the United States was a defensible strategic choice for a smaller country that derived much of its influence from the closeness of the bilateral relationship. Where the Blair government got it wrong was in not pressing for more influence over the policy in exchange for its support. George W. Bush’s administration might well have rejected such efforts, but the British government could then have exercised the option of distancing itself from a policy that many believed was unlikely to succeed.
Many lessons should be taken from the Iraq War. One is that, because assumptions fundamentally affect what analysts tend to see when they look at intelligence, flawed assumptions can lead to dangerously flawed policies. Nearly everyone assumed that Saddam’s non-compliance with United Nations inspectors stemmed from the fact that he was hiding weapons of mass destruction. In fact, he was hiding the fact he did not have such weapons.
Likewise, before they started the war, many policymakers believed that democracy would emerge quickly once Saddam was gone. Ensuring that such fundamental and consequential assumptions are tested by “red teams” – those not supporting the associated policy – should be standard operating procedure.
There is also the reality that removing governments, as difficult as that can be, is not nearly as difficult as creating the security that a new government needs to consolidate its authority and earn legitimacy in the eyes of the public. Creating anything like a democracy in a society lacking many of its most basic prerequisites is a task of decades, not months.
The Report said little about the legacy of the Iraq War, but it is important to consider. First and foremost, the war disrupted the regional balance of power. No longer in a position to distract and balance Iran, Iraq instead came under Iranian influence. Iran was free not just to develop a meaningful nuclear program, but also to intervene directly and via proxies in several countries. Sectarian fighting poisoned relations between Sunnis and Shia throughout the region. The alienation felt by soldiers and officers of Saddam’s disbanded army fueled Sunni insurgency and, ultimately, led to the rise of the so-called Islamic State.
The war had a profound effect not just on Iraq and the Middle East, but also on the UK and the US. The British parliamentary vote in 2013 against participation in any military effort to penalize Syrian President Bashar al-Assad for defying explicit warnings not to use chemical weapons in his country’s civil war was surely related to the view that military intervention in Iraq had been a mistake. It is also possible that some of the mistrust of elites that led a majority of voters to support “Brexit” stemmed from the Iraq War experience.
The Iraq War and its aftermath similarly affected the thinking of US President Barack Obama’s administration, which had little appetite for new military ventures in the Middle East at a time when many Americans were suffering from “intervention fatigue.”
The danger, of course, is that lessons can be overlearned. The lesson of the Iraq War should not be that all armed interventions in the Middle East or elsewhere are to be avoided, but rather that they must only be undertaken when they are the best available strategy and when the results are likely to justify the costs. Libya was a recent intervention that violated this principle; Syria has been even more costly, but in its case for what was not done.
The Iraq War was costly enough without people learning the wrong lessons from it. That would be the ultimate irony – and only add to the tragedy.
Source: https://www.project-syndicate.org/commentary/chilcot-report-iraq-war-lessons-by-richard-n--haass-2016-07