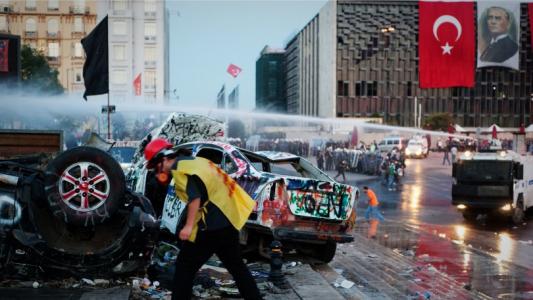 Nuray Mert
Que sera, sera” is how some of us are looking at current developments in Turkey: “What will be, will be.” But in our case this only refers to a feeling of uncertainity, hopelessness and despair. The future is uncertain, not only for dissidents but also for the whole country, which stands on the verge of regime change.

There is no hope for political compromise between the ruling party and all others who worry that the new regime will be an even more authoritarian one under one-man rule. Under the circumstances, there seems to be no prospect for lowering social tension and political polarization. There seems no chance to end state of emergency rule, as the government has said it will continue “for as long as extraordinary measures are necessary in the fight against terrorism” of all sorts.

We feel hopelessness and despair, since under current circumstances there seems no chance to change the course of events in democratic ways and we seek no other means. What’s more, there is little chance to object to the violation of rights and freedoms, indeed that is what emergency rule means and how it works. Under such circumstances, dissent is defined as sedition and dissidents are perceived as “public enemies” who do not deserve any protection, including the protection of law.

Governmental (ie. presidential) decrees long ago replaced regular laws, despite the fact that the present penal code is sufficiently undemocratic to suppress dissent anyway. It is as if the current ruling party’s politicians had never once sought the support of democrats to get rid of authoritarian laws in the status quo ante; now it needs even more power to curb rights and freedoms.

In fact, it is not only the politics of the ruling party that leaves no hope for more democracy. The Nationalist Movement Party (MHP) has firmly allied itself with the “nationalist/patriotic cause” of the government regarding Kurdish politics and the presidential system. It is said that the draft for the new constitution is considered sufficiently nationalistic by the MHP, as the proposed presidential system firmly closes the door to more Kurdish autonomy.

Now we have an informal coalition of conservatives and nationalists, promising more authoritarianism based on nationalistic and Islamic legitimacy. It promises more polarization and social tension, as this coalition tends to view and therefore divide society between “good sons and daughters of the nation” and the “enemies of the nation” who refuse to comply with the views of the ruling coalition.

The compromise reached between the conservative Islamists and the nationalists promises no compromise between “them” and “the others.” It also promises no chance for a peaceful solution of the Kurdish issue, as it equates political negotiation with treason. This coalition promises the establishment of a Turkish-style presidential system with no checks and balances, no judicial independence, and no accountability, since the like-minded ideologies of the Islamists and the nationalists view division of power as a weakness that will lead to national annihilation.

“Que sera, sera,” since we cannot avoid it. “Que sera, sera,” but we actually do know what lies ahead - and we are very afraid.
http://www.hurriyetdailynews.com/que-sera-sera-in-turkey.aspx?pageID=449&nID=106341&NewsCatID=406