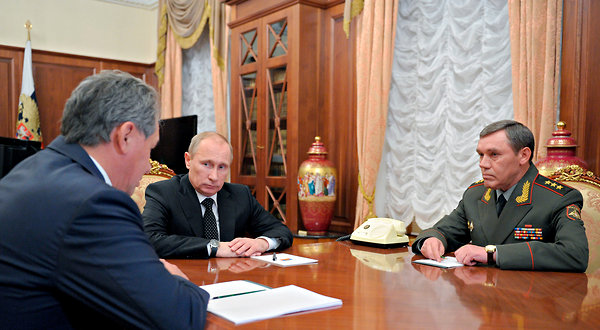 MOSCOW — President Vladimir V. Putin replaced the head of the Russian military’s general staff and a number of top generals on Friday, continuing an overhaul of military leaders that began with the removal of Russia’s defense minister earlier this week.
Col. Gen. Valery Gerasimov will replace Gen. Nikolai Makarov, who has served as chief of the general staff since 2008. The move was not unexpected, since the new defense minister, Sergei K. Shoigu, has the right to install his own team in top military posts.

His predecessor, Anatoly E. Serdyukov, was dismissed on Tuesday amid a swirling corruption scandal. Many analysts saw those charges as a pretext, though; Mr. Serdyukov had alienated many in the uniformed military by pushing through deep cuts in the ranks of officers, and top generals were eager to see him go.

At a meeting Friday morning, Mr. Putin alluded to another set of tensions building within military circles, this time over relations with defense manufacturers. He told Colonel General Gerasimov that the Defense Department had been frequently changing its orders for weapons and other military hardware.

“The situation in the scientific-technical sphere is changing quickly, and new means of armed warfare are appearing,” Mr. Putin said, according to the Interfax news service. “We should orient ourselves toward optimal means, but still need to maintain a certain stability. I am counting on you and the ministry to establish stable, good collegial work with our leading manufacturers in the defense sector.”

Defense manufacturing dominates large areas of Russia, in many of the places Mr. Putin counted on as a base of support ahead of the presidential election in March. Major government orders buoyed economic prospects in many of those places during Mr. Putin’s campaign, helping him to win around 64 percent of the vote nationwide. Military spending became a tense subject this fall, however, when the government turned its attention to the budget.