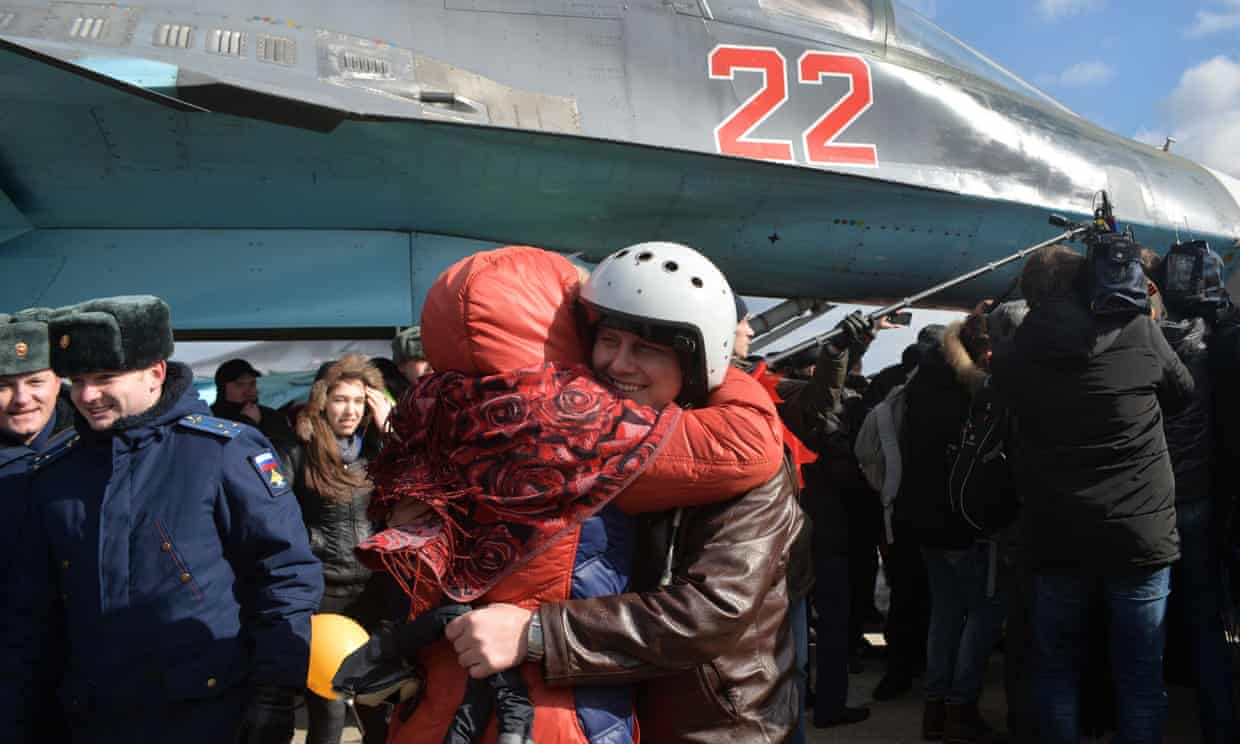 Jonathan Steele, theguardian
Vladimir Putin’s dramatic decision to cut his military intervention in Syria has flatfooted everyone from the White House to Bashar al-Assad, and yielded predictably cynical reaction. “It’s a pretty brilliant tactical move,” says the independent military analyst Alexander Golts. Putin has “reaped a positive return” from his intervention, according to the former US assistant secretary of state PJ Crowley. But there is a more nuanced view.

Putin is essentially telling Assad that, five years after the uprising started, he must take the Geneva talks seriously and finally compromise. The Syrian foreign minister’s recent press conference statement that Assad’s future cannot be discussed in Geneva will have irritated Putin. It may have tipped him into making his surprise announcement.

Even though Russia’s warplanes changed the balance of power on the ground in Syria, the Kremlin’s stark message is that Assad cannot rely on the Russians to bring him military victory. There has to be a political solution.

Western politicians have often claimed that Russia will always be ready to bail Assad out, but there has been contrary evidence for some time. At the meeting between Putin and Assad in Moscow last autumn, shortly after the Russian air campaign began, it was noticeable that in his public remarks before the cameras withdrew Putin repeatedly praised “the Syrian people” for their courage and determination in standing up to terrorism. He never praised Assad personally.

Putin also insisted that the purpose of his military intervention was to accelerate the peace process. Yes, we can stop you being overrun and defeated, he was telling Assad; but you cannot expect us to keep you in power for ever.

This message was made clear again when the Russians and Americans, along with the other outside powers involved, met for two rounds of talks in Vienna to hammer out a framework for negotiations among Syrians. In language that Assad and his officials have never copied, the Russians described the conflict in Syria as “a civil war”. Sergei Lavrov, the foreign minister, even used the phrase “the legitimate armed opposition”. This was a sharp departure from Assad’s terminology. The Syrian president continues to describe the struggle as a battle against terrorists, adding that if only Turkey and other states were to stop arming jihadis, everything would go back to normal. 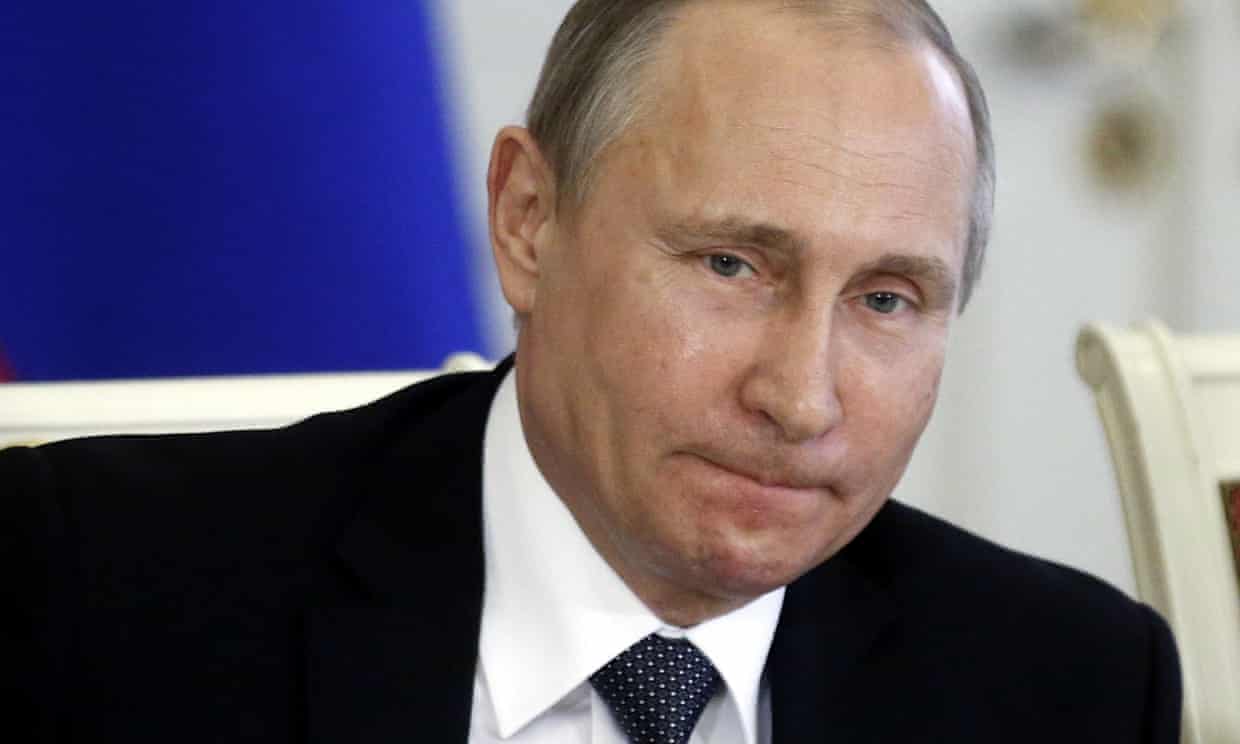 The Russians will have none of this. They have seen the reality, which is that this war remains primarily an internal conflict, however much it has been hijacked by outside powers. Lavrov has invited Free Syrian Army representatives to Moscow for discussions. The Kremlin has had talks with other anti-Assad groups, such as the Syrian Kurds, who have been the best “boots on the ground” against Islamic State. They have just opened an office in Moscow.
From the outset, Putin made clear that his intervention was not open-ended. His decision to reduce it within less than six months probably follows the sober assessment his military advisers must have given him. Much has been made of the appalling toll of civilian life the conflict has caused. Syrian aircraft have supremacy, and have been dropping barrel bombs with impunity. The impression the outside world receives is that 90% of the death toll in Syria consists of civilians. It is certainly a refrain that civil society groups in Syria, as well as the non-Islamist armed groups, constantly put across on social media.

They still cling to the fantasy that if they can highlight the humanitarian effects of the war the west will come in militarily, as it did in Libya in 2011.

One cannot, and should not, underplay the suffering of the hundreds of thousands of displaced and starving Syrians. But there is a specific point to be made: the record shows less than half the people killed in Syria were civilians. Take the first month of this year, when Russian and Syrian airstrikes were at their height. Figures for January from the UK-based Syrian Observatory for Human Rights 2016 show that 4,680 people died. Of these, about 30% were civilians; 1,487 troops from the government army and the pro-regime militias, the National Defence Forces, were killed. As many as 1,080 non-Syrian jihadis also died, along with 603 anti-Assad fighters.

The figures are illuminating. Although the mantra is constantly repeated that “Assad is killing his own people”, they show opposition forces are killing fellow Syrians too. This is a classic civil war, in which it is men with guns much more than civilians who are bearing the brunt. The Russians have seen that and learned the lesson. Their air power paved the way for Assad’s forces to capture some parts of rebel-held Aleppo, and for a time in December and January it seemed they might take the whole city. But things did not turn out so well. Pro-regime forces paid a high price and still did not succeed in their goal.
Putin is telling Assad: “We gave you a new lease of life. We propped you up in your heartland around Latakia and Idlib and prevented it from falling. We helped you advance around Aleppo. With the Americans and their clients we have brokered a ceasefire. Now it’s up to you to reach a compromise with your legitimate opponents.”

For Putin, the Syrian intervention has been a high-stakes game in which he has, so far, done well. He has reinserted Russia into the Middle East as a decisive and tough player. He has become a key player in the region’s diplomacy. And he leaves the ball in Damascus’s court.