On terror at Istanbul Airport 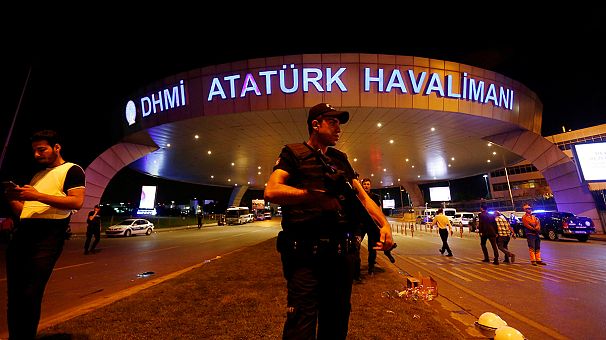 MUSTAFA AKYOL, hurriyetdailynews
I pass through Istanbul’s Atatürk airport dozens of times every year. It is one of the places that makes me (still) optimistic about Turkey’s future. More than a million people pass through it every week. When you walk into the international terminal, you feel like you are at the center of the world, for you see faces from all over the worlds: Turks, Arabs, Israelis, Europeans, Central Asians, Southeast Asians, Americans, Africans, and all the diverse colors of God’s creation. When you stroll around the chic shops and cafes, or have the privilege to use the all-impressive Turkish Airlines lounge, you feel that Turkey has really accomplished something.

That is the place three terrorists hit last Tuesday night. They ruthlessly killed at least 44 innocent people, and injured more than 200. I looked at the painful list of the victims. Most of them were Turks, others were nearby from countries like Iraq, Saudi Arabia, Iran, Tunisia, Jordan, Uzbekistan and Ukraine. Their names read Zehra, Meryem, Hüseyin, Mustafa, Ali, Abdulhekim, Abdurrahman, Habibullah. Almost all of them, in other words, were Muslims.

The religious identity of the victims matters for only one thing: The terrorists, as the Turkish authorities have declared, were members of the Islamic State of Iraq and the Levant (ISIL), the death cult which declares itself “Islamic.” It was yet another sad reminder that the number-one target of violent Muslim extremists is other Muslims. It was also the affirmation that the world is not divided not between Muslims and others, as some seem to think, but rather between the overwhelming majority of all faith communities who value human life, and marginal hate-filled fanatics who threaten us all.

How should Turkey deal with these fanatics? Well, first, it must wake up to the seriousness of the threat. I never bought the AKP-is-supporting-ISIL accusations that have been popular in the West and Turkish opposition circles. But it is true that the Justice and Development Party (AKP) government has woken up to this threat only very belatedly. First, their obsession to topple the regime of Bashar al-Assad (which is of course evil, but not the only evil) blinded them to the problem. Then their worries about Kurdish gains (more precisely, gains by the Kurdistan Workers’ Party - PKK) in northern Syria blinded them for the second time.

On top of this, there is the ideological blindness in the pro-AKP camp to the ideology of ISIL. By reiterating the appalling nonsense that ISIL is a pawn of a “mastermind” in the West, they are only diverting their attention to the ideology of the group. Meanwhile, this ideology, namely Salafi-Takfiri-Jihadism, had been making inroads in Turkey in the past five years. A report by police intelligence estimates that 25,000 ISIL sympathizers now exist in Turkey. Of course, that is a marginal number in a nation of 78 million people, but marginal numbers are more than enough for effective terror campaigns.

On the brighter side, Ankara has been active in the anti-ISIL coalition since last summer, and has arrested certain ISIL members in Turkey in the recent months. These efforts should be intensified amid the reconciliations with Israel, Russia and more.