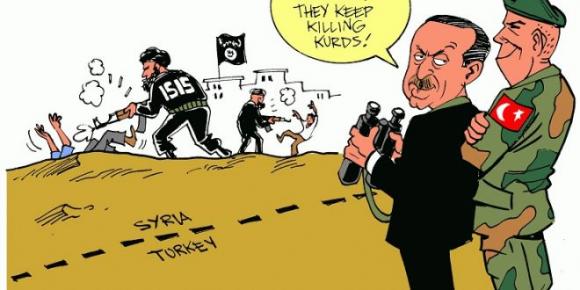 The geopolitical and geostrategic interests and balance in Turkey, due to its current Islamist Government lead by the authoritarian President Erdogan, have changed the country in last 15 years to an unrecognizable degree.

In my personal opinion it’s hard to continue to define Turkey as an ally to Canada, USA and EU, and naturally to the NATO, too.

This situation also makes Kurdish people’s struggle for their ethnic identity and recognition, denied by Turkey since mid-1920, extremely difficult because all political, academic and pacifist avenues to this end are being blocked. President Erdogan’s Kurdish policy makes the final destination of Turkey the one of the civil war, similar to the ones experienced and witnessed in the greater Middle East.

Contemporary Kurdish struggle has spread to all other parts of ethnic Kurdistan, which has been divided and occupied by the regimes of Turkey, Iran, Iraq, and Syria. After the failing of the so-called Arab Spring, which brought disappointment to the masses hungry for democracy and peace, living under ill-democracy and oppressive regimes since the WWI, the Kurdish Spring started.

The neo-Ottoman ideology followed by the current Turkish government aims to regain some of the former Ottoman colonies, especially parts of Kurdistan in Iraq and Syria,

In order to achieve these neo-Ottoman territorial goals Turkey would need to exterminate Kurdish Armed Resistance in Turkey (PKK and armed wing HPG), and in Syria PYD and the armed wings of YPG and YPJ (women only force).

Since 2011 Turkey has been sponsoring global Wahhabi terrorism and its affiliated organizations, starting by supporting anti-Assad Syrian opposition all of which currently turned to be Islamist ―one way or another.

Turkey’s sponsorship of terrorism complicates the Western coalition war against Islamist extremism, notorious for its extremely inhumane in dealings with civilians, especially Kurds and non-Muslims (majority of them being Christians), with ISIS in particular being the most cruel of all.

Not only Kurdish forces in Turkey and Syria, but also US-Coalition forces have captured enough ISIS terrorists, and documents to establish the truth that Turkey is heavily involved with state sponsorship of terrorism.

Coming back to Kurdish Struggle in Turkey for ethnic identity recognition, Turkey still creates legal and political obstacles to block Kurds’ political struggle. This includes parliamentary avenue against pro-Kurds HDP, which after the 7 June 2015 election has put 80 MPs into the Turkish Parliament.

However, AKP government under pressure from President Erdogan decided not to form a coalition Government, because Erdogan wanted to have a Hitlerite-type of administration that he himself would have the absolute control over. He even made a reference to this by mentioning Adolf Hitler by name in first week of January 2016.

However, AKP again didn’t get the majority of parliamentary seats to give Erdogan what he wants, when pro-Kurdish party HDP got 59 MPs.

Since then president Erdogan and AKP government have been making structural and gradual changes to Turkish state, economy, courts and judiciary, military, press and academia to have something I would call Islamic Republic of Turkey destined to be declared in 2023, at the centennial commemoration of Turkey’s independence.

What the Western observers are missing is to see that Turkey’s dealings with PKK about Peace and Disarmament were never intended to achieve its stated objective. As soon as Turkey created enough tension with the Kurdish people, Turkey called the peace talks off accusing PKK for not disarming while not offering any concrete program on how to implement the disarmament process.

Recent arrests of co-leaders of HDP Mr Selahattin Demirtas and Mrs Figen Yuksekdag, and 11 jother MPs which expected to exceed 28 in order to call for early election, also would allow Erdogan to win over 400 seats in the parliament to give him absolute power.

President Erdogan called YPG to “come and rescue” the arrested MPs, during his speech referring to HDP backing YPG and Coalition forces’ war against ISIS, an admission that proves that HDP leadership and MPs were arrested in connection with Kurdish fighters fighting against ISIS.

Western governments are still calling Turkey an ally, although Turkey made sure to demonstrate it is a Non-ally. And if Western world still wants Turkey in the Alliance, they must push for democracy, rule of law and human rights regime to be the implemented in Turkey.

Unfortunately, only Kurdish people are left to organize secular, pro-West and liberal forces of Turkey to create an alternative to Erdogan and his neo-Ottoman geopolitical adventures.