It’s not finished until it is finished 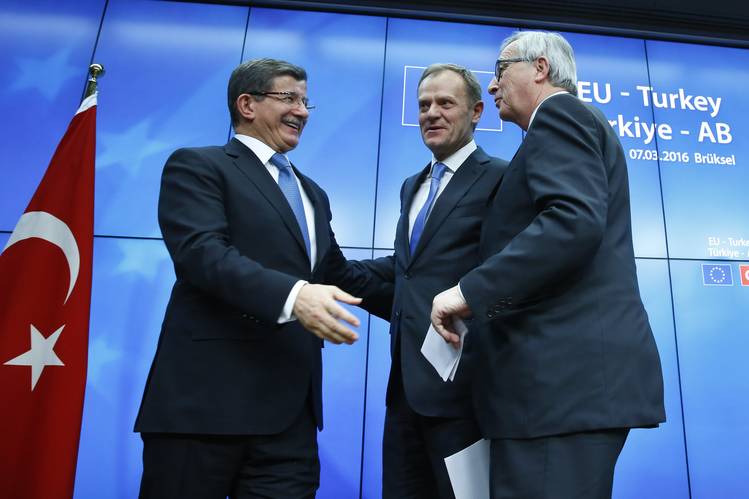 There is a celebratory mood in government circles about the agreement in principle arrived at between Turkey and the EU on the refugee crisis. This is premature though, since EU members still have to ratify the agreement on March 18.

It is clear however that this will be a major victory for Prime Minister Ahmet Davutoğlu if it is endorsed. He will have bargained from a point of strength and secured major advantages for Turkey, including a lifting of the visa restriction on Turks to Europe by the end of June.

He will also have secured 3 billion euros more than the EU was initially prepared to give. Furthermore, he will have ensured that in return for every illegal Syrian refugee that Europe returns to Turkey, the EU will legally admit one Syrian refugee into Europe.

In addition to this he will have accelerated Turkey’s EU membership process. All of this does appear to be lucrative, but the deal is also a tall order for some European countries to accept.

There are those who will oppose the lifting of visa restrictions on Turks, while others will not be too keen about speeding up Turkey’s EU membership process. There are also those who previously grumbled about the initial 3 billion euros promised to Turkey to cope with the refugee crisis and will be unhappy this figure has doubled.

Ankara however has caught Europe in its “Achilles’ Heel” and any country that undermines the deal will be deemed the spoiler whose actions also undermined the foundation of the EU.

It is up to German Chancellor Angela Merkel, whose country is the EU’s locomotive force, to show leadership here and bring the malcontents in line. She is the only European leader that Ankara is really looking at to deliver the deal.

There are also other reasons to remain reserved about the prospects of the deal succeeding in the end. The UNHCR is distancing itself from it and questioning its legality. Human rights groups are denouncing it as “inhumane,” which could sway the opinions of many in Europe.

Put in a nutshell “it’s not finished until it is finished,” as the saying goes. But there is an aspect to the deal which many Turks are approaching with a sense of schadenfreude. Europe considers itself to be the bastion of human rights, yet the refugee crisis and the deal worked out with Turkey to address this have also shown Europe’s true face when the chips are really down.

We have seen more racism than humanity to date, as Europeans panic over being flooded by mostly Muslim “aliens.” We have also seen that Europe is prepared to condone human rights violations and the erosion of democratic principles in other countries when its own interests are at stake.

There has been some grumbling among European leaders, and EU officials, over the erosion of democratic principles in Turkey, starting with attacks by the authorities against the freedom of expression and press freedoms. But the statements made in this regard are “pro forma” statements which carry no weight.

If the deal worked between Turkey and the EU goes through, it will also expose the EU in another respect. If it is accepted on March 18, this will be because of the pressure brought to bear on the Greek Cypriot administration, for example. This means that if the EU was truly sincere about Turkey’s membership bid it could have done this in the past also.

None of this matters at this stage, though, since diplomatic horse-trading is really the stuff international relations is made up of. The bottom line is that if this deal goes through it will enhance Davutoğlu’s international and domestic reputation, and help Turkey turn westward again.

Whether everyone in Turkey, especially those in the loftiest of heights, will be happy over this is another question, of course.