Is the United States Really a Pacific Power? 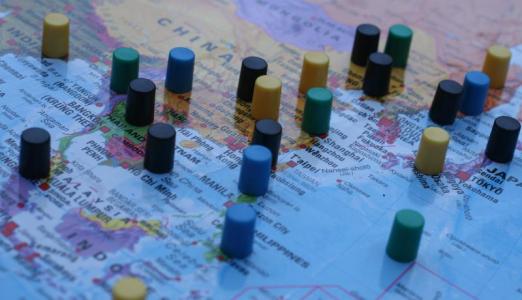 Washington has failed to demonstrate that it has the stomach to remain a resident power in Asia.
Recognizing the geostrategic significance of Asia for the twenty-first century, President Obama told an Australian Parliament in 2011, “The United States is a Pacific power and we are here to stay.”

But with U.S. membership in the Trans-Pacific dashed, and the inability of the U.S. Navy to deter a rising China in the South and East China Sea, Washington has failed to demonstrate to Asian partners and rival China that it has the stomach and resources to remain a resident power in Asia.
Recognizing waning U.S. military predominance in the western Pacific, Trump’s Asia advisers Peter Navarro and Alexander Gray recently advocated for strengthened U.S. naval presence there. Their vision of enforcing “peace through strength,” however, is likely to backfire without economic engagement–precisely what the TPP brought to Washington’s Asia strategy. Rather than increased security, more U.S. militarization is likely to add to Beijing’s suspicion of a now-outright containment strategy adopted by American defense and foreign policymakers. As Nicholas Borroz and I argued in the New York Times, this will only lead to increased Chinese aggression and hasten U.S. withdrawal, or worse, major power war.

The Obama administration sought to “rebalance” U.S. foreign policy to the Asia-Pacific by enhancing economic and military ties to the region, while investing in our Asian allies. Now the sheer magnitude of Beijing’s economic and military clout, paired with declining American appetite for global leadership, herald a shifting balance of power in Asia. The emphasis of Donald Trump’s team on American military power point to a worrying slide toward superpower conflict.
Rather than being threatened by China’s rise, U.S. leaders should face it with fortitude and equanimity, realizing it doesn’t impinge on core national interests. In fact, we may be witnessing a return to a status quo ante, in which China enjoyed primacy over a number of minor tributary states on its periphery. Before European imperial powers in the seventeenth and eighteenth centuries and the United States in the nineteenth and twentieth had ever reached Asia, Beijing was the resident superpower.
Most Americans have a cursory knowledge that as president (1901-09), Theodore Roosevelt oversaw the massive expansion of U.S. influence in the Pacific, having inherited from Spain the territories of the Philippines and Guam under the previous McKinley presidency, in addition to Hawaii, following the end of the Spanish-American War in 1898.
However, since before the American Civil War, U.S. statesmen had advocated for a greater American role in Asia, particularly in trade. As a New York senator, William Seward, later Abraham Lincoln’s Secretary of State, in 1852 professed his belief that Asia would soon become the world’s “chief theatre of events,” and in 1856 proclaimed, “We are now a power of the Pacific Ocean.”
Japan’s military imperialism in the first half of the twentieth century and China’s internal political chaos led the United States to intervene toward the end of World War II by sending troops to combat the Japanese and finally by dropping two atomic bombs to bring Japan to the negotiating table.
Since the end of World War II, the United States has underwritten the stability and prosperity of the Asian hemisphere by playing the role of security guarantor. However, the global balance of power is now shifting. Militarily, the United States rotates tens of thousands of troops in South Korea, Japan, and Guam, with new basing agreements in the Philippines, and a web of alliances from the South Pacific to Northeast Asia.
Today Asia accounts for more than half of global economic growth and is expected to nearly match the military spending of the United States by 2020. Donald Trump’s questioning of American alliances and vision of “America first” isolationism espoused on the campaign trail raise questions about the longevity of U.S. commitments to Pacific partners. The United States relies on Asia for 60 percent of total export in goods and 72 percent of agricultural exports. But without TPP’s passage, U.S. economic influence in Asia will decline markedly.
Clearly, U.S. soft power has a strong appeal in Asia. Polls across the region confirm the enduring popularity of the U.S. economic and political system and American culture. According to a 2015 survey by the Pew Research Center, a majority of Asian countries still support the U.S. pivot.

China’s rise jeopardizes U.S. primacy in Asia. It has already eclipsed the EU and United States as ASEAN’s largest trading partner. Beijing’s expanding influence now manifests in hedging by the Philippines and Malaysia, both of whom have extracted lucrative investment deals by seeking warmer ties with Beijing.
Excluded from greater leadership in international financial institutions, China has launched massive new trade initiatives of its own in an attempt to reshape the region’s architecture to suit its great power status. The Asian Infrastructure Investment Bank (AIIB) and Regional Comprehensive Economic Partnership (RCEP) are two readily available alternatives to the increasingly shaky U.S.-led initiatives.

China will increasingly test American military prowess and security commitments in Asia as well. It is becoming clear that Beijing’s end goal is to push the U.S. military out of its first and second island chains as it gradually establishes primacy on its periphery–just as the United States did following the Monroe Doctrine in the nineteenth century.
At first glance, the United States’ status as a resident Pacific power may appear intact, but a variety of factors signal that its leadership should not be taken for granted. The rise of China has surprised U.S. policymakers with its rapid pace and confounded strategic thinkers’ ability to respond adaptively (the South China Sea being just the most visible example).
President Obama’s claim, “In the Asia Pacific in the 21st century, the United States of America is all in,” might turn out to be mere rhetoric if the United States cannot summon a whole-of-government strategy for twenty-first-century challenges in Asia. That means not just sending more US Navy vessels to the western Pacific, but engaging in regional trade architecture and preserving America’s core alliances with active diplomacy.
Hunter Marston is an independent Southeast Asia analyst based in Washington, DC. Follow him on Twitter at @hmarston4.