Skip to main content Skip to search
Secondary menu
Home » Is the Battle for Mosul Doomed? 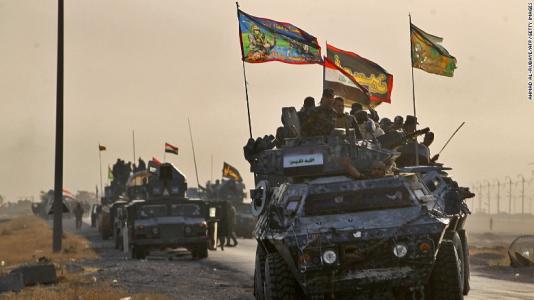 Iraqi prime minister Haider al-Abadi claimed last week that he was very pleased with his troops’ progress. “We have seen the whole organization collapsing in terms of standing in the face of our own armed forces,” he said, adding that the “success of liberating a huge area indicates that Daesh does not have the gut[s]” to stand and fight. Yet the number of villages and square kilometers of land retaken tells only part of the story, and may be deceptive by itself.

Mosul is a city with a population close to two million. ISIS is alleged to have begun the battle with no more than ten thousand fighters. Unless they are militarily inept—which doesn’t appear to be the case—they never planned to even attempt to hold the entire city from the coalition, so the rapid capture of scores of villages should not surprise anyone. The only plan that ever made any sense from a military perspective was to conduct a fighting withdrawal to a prearranged and secure position deep within Mosul.
Using this scheme, they would slowly collapse the extended security zone around Mosul, which they had established over the preceding two years, exacting as high of a casualty rate as possible on the attackers. ISIS would fight the ISF but not become decisively engaged, enabling its fighters to effectively withdraw to the next sequential line of defense. They would continue this collapsing process until they arrived at the designated no-penetration line—or die-in-place line—which appears to be on the eastern side of the Tigris. An analysis of their current behavior indicates they will eventually cede the western half of the city and make their stand on the eastern side.
This final line likely represents a very small portion of eastern Mosul, which the ISIS leadership believes is the most defensible, and they have no doubt established elaborate tunnel systems both within individual buildings, floors and rooms, and underground between strong points. If the defenders have resolved to fight to the death, they’ll contest each street, each house and possibly every room within strategic buildings. The intent will be to exact as high a death and wounded toll as possible on the attackers to sap their strength and domestic support.
ISIS may well calculate that the ISF’s will to fight is insufficient to press the bloody fight to a conclusion, or that the unnatural coalition assembled against them can’t survive if the fighting drags on months into 2017. There is at least an outside chance that if ISIS holds out some distance into next year, its stature in the world will grow for having held out against impossible odds, and it’ll gain new converts and recruits. Despite the coalition having overwhelming advantages, the outcome of this fight is still not a given.
The ISF, Sunni militias, Kurdish peshmerga, Popular Mobilization Units and Western military assistance are together profoundly stronger than ISIS. The coalition is equipped with mortars, heavy artillery, missiles, satellite intelligence systems, tanks and fighter aircraft. Moreover, Baghdad’s allies have a virtually unlimited logistics system to supply them with manpower, medical treatment facilities stocked with qualified doctors and medicine, and all the weapons and ammunition they could want.
ISIS has virtually none of those assets. Yet it has the pointed advantage of knowing the terrain better than any attacker, it has prepared elaborate defensive positions for months, and it appears to have the will to make any sacrifice necessary in defense of its cause. Now in the seventh week, current indicators seem to suggest that it may be ISIS, not the coalition, that has the upper hand.
Almost absent from Western reporting, a report from the United Nations Assistance Mission for Iraq on December 1 revealed that the Iraqi forces had sustained an alarming number of casualties against ISIS for the month of November. The report, authored by UN envoy Jan Kubis, noted that almost two thousand Iraqi troops had been killed, 450 wounded and 926 civilians had lost their lives. “The casualty figures are staggering,” Kubis said.
If this report is correct, it should be a cause of concern for Baghdad. If the ISF has suffered this many casualties already, what is to be expected when the truly hard part of the fighting ensues? How long will the Iraqi public support government efforts if the fighting bogs down? If the ISF proves incapable of pressing the battle to victory, might the pressure to send in Shiite Popular Mobilization Units increase? The implications for the Abadi government are troubling.

Yet the situation is equally troubling for Washington. What will the incoming Trump administration do if the fight bogs down into an Aleppo-style stalemate? If the PMU enters the fight against ISIS in Mosul, and clashes occur between Shiite and Sunni militia members, whose side will the U.S. military take? In September I warned of the danger that a civil war could break out after ISIS was driven out of Mosul, but such threats may emerge during the battle if the coalition doesn’t quickly quash ISIS.
The United States has deepened its involvement in this multi-headed conflict in Iraq and Syria, and it is getting increasingly difficult to conceive of any sort of positive outcome. Donald Trump was in a celebratory mood on Election Day after the results were announced. He may be less so on Inauguration Day, when he inherits the wars in Iraq and Syria. Unless circumstances turn around quickly, he may have some excruciatingly difficult decisions to make shortly after he takes the reins.

Daniel L. Davis served multiple tours in Afghanistan and serves as a senior fellow and military analyst for Defense Priorities.