Is Turkey going to reinstate the caliphate? 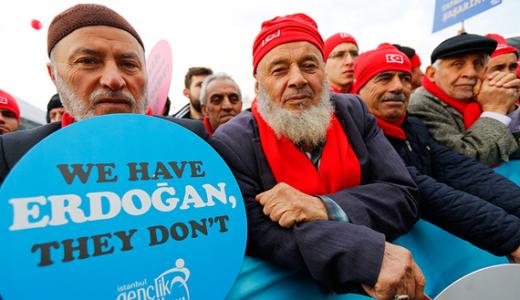 On Dec. 14, Turkish President Recep Tayyip Erdogan unexpectedly declared national mobilization. Addressing muhktars (elected village and neighborhood headmen), Erdogan said, “Henceforth, neither terrorists nor their supporters will have a minute of peace.” He encouraged security forces not to hesitate to use their powers, while reiterating that Turkey cannot stay on the defensive but from now on will go on the offensive against terror organizations.

The public could not figure out what to do with the idea of national mobilization, which Turkey had not experienced since the 1940s, the World War II era. On Dec.15, Erdogan elaborated that the national mobilization meant national solidarity. But Turkish mainstream media was already discussing what national mobilization entails. Why would Erdogan continue increasing the social pressure on the country given the distressing economic and political trends?

Erdogan’s populist slogan “National will demands this” is pulling the country into a quagmire.
For most Turks, mobilization means calling up army reserves and commandeering private buses and trucks for military service.

Looking at the recent events in the country, we can detect a pattern of extreme rhetoric that puts Erdogan’s most recent words into perspective.

After the twin bombings in Istanbul, Erdogan and his cohorts took it as a personal mission to save Aleppo. Hence, on Dec. 13, the Islamist group Hizb ut-Tahrir organized a rally in Istanbul to protest against Russia. The Russian Consulate in Istanbul is located on the famous Istiklal Avenue, where thousands marched, chanting “Allahu akbar" ("God is great"), “The only path is martyrdom,” “Murderer Russia, get out of Turkey.”

This march provided an interesting insight into the complexities of the country. First, freedom of assembly and protest has become a contested right during the Erdogan era, and since the declaration of emergency rule July 21, it has become almost impossible to hold a gathering without police intervening. Yet the crowds that gathered in support of Aleppo on Dec. 13 marched peacefully without any interruption. This alone confirms that the Aleppo protest was condoned by the Justice and Development Party (AKP) government. If you read through Hizb ut-Tahrir’s publications and their members’ Twitter timelines, you see that they are one of the harshest and most outspoken critics of Erdogan’s failed Syria policies. For example, on Dec. 13, Mahmut Kar, Hizb ut-Tahrir’s media bureau chief, tweeted to the Turkish Foreign Ministry: “You will celebrate this [evacuation from Aleppo] as if it was a victory, and your cronies will say ‘Erdogan intervened so Aleppines were transported.’ I say it clearly you sold Aleppo out.”

The Turkish independent press, however, focused on another aspect of what the protesters were demanding — to reinstate the caliphate. The photos clearly show gender-segregated groups and green as well as black flags of the caliphate.

While the protesters were asking the armed forces to march into Aleppo to save the Muslim brothers, AKP parliamentarian Ahmet Conkar viewed this march as a “humanitarian sentiment.” He argued that this protest would have a positive impact on Turkish-Russian relations. None of the AKP members provided comments about the demands of different Islamists groups, and Hizb ut-Tahrir, on the caliphate.

On the same evening, there was another protest in support of Aleppo in the Uskudar district of Istanbul. Aykut Erdogdu, a parliamentarian from the main opposition Republican People’s Party, shared a video on Twitter that showed an official Uskudar municipality minibus making the following announcement on loud speakers: “In order to end the bloody, shameful days of Egypt, Syria and Iraq, we must establish Islamic unity as soon as possible and choose our caliph. Unless we obey God’s orders to unite, the Islamic world will suffer from occupation, blood, tears and hardship.” The video ended as the unknown preacher defied “Zionists, infidels and imperialists” and crowds continuously replied “Amen.” In this minute-long video, not one person seems to challenge the statement. Yet once Erdogdu shared the video with a comment “This is unconstitutional,” there was a public uproar on social media. The Uskudar municipality was pressured to make a public statement on Dec. 15 that the announcement was not associated with them, because they had rented out the municipality’s minibus to a private person, declining any sort of responsibility.

Another incident that disillusioned the Turkish opposition was a series of tweets from research assistant and doctoral student Abdulkadir Sen from Marmara University in Istanbul. Sen tweeted as the Syrian armed forces were declaring victory in Aleppo that anyone who supports the Syrian armed forces or Alevis are awaiting murder in Turkey. Speaking in historical metaphors of centuries of Alevi persecution during Ottoman times, he wrote, “If the Syrian resistance fails, everyone [in Turkey] will have to live with sectarian murderer descendants of Shah Ismail [revered as a spiritual guide by Alevis]. Everyone should prepare for that.” Given the harsh criticism, first Sen changed his Twitter handle, then it was announced that he was put on academic suspension to investigate the allegations. Islamists were up in arms about the decision.

The background of this case also poses quite interesting questions for the AKP. The Turkish public is no stranger to Sen, as he appears on both government-funded and pro-government channels frequently. Also, Sen is the brother of Ibrahim Sen, the first Turkish detainee at Guantanamo Bay. Sen himself has been taken into custody on suspicion of being a member of al-Qaeda in 2014. But still he managed to land a position at a government university, which requires diligent criminal background checks. How could this be possible without the approval of AKP bureaucracy? This was a frequently asked question on the few social media platforms still open to Turks.

Immediate reactions to these events can be seen on Dec. 15, when the pro-Kurdish Peoples’ Democratic Party (HDP) headquarters was attacked. Currently 14 out of 59 HDP parliamentarians are in jail, either detained or arrested. In addition, the pro-Kurdish Democratic Regions Party (DBP), which controls 41 municipalities out of 102 municipalities in the southeast, has been taken over by the government. Tens of elected mayors and municipal officers from the BDP are in custody. In short, the HDP —Turkey's third-largest party — is out of the political game, both on the local and national levels.

Except for some social media outbursts, the Turkish public is rather quietly watching all of this unfold, as the state of emergency turns into an ambiguous form of national mobilization. Maybe one picture explains the case better than a thousand words: An elementary school teacher posted on his Facebook page his classroom pictures from the Basaksehir district in Istanbul. One was particularly worrisome, where students held nooses. The students, following the lead of their teacher, were calling for the much-debated capital punishment as final justice for traitors. These photos were indeed a shocking reflection of all the ultranationalistic and hate-mongering rhetoric pumped into the public after the July 15 coup attempt.

On Dec. 15 in a last-ditch effort, Alevi associations, Kurds, secular and other marginalized groups in Turkey initiated a hashtag #OHALdeAleviyiz to show their solidarity with the Alevis against the proposed caliphate. OHAL is an acronym for emergency law in Turkey, and it is a homonym, and the second meaning is “in that case.” Hence, the hashtag reads, “In that case, we are Alevis” and also “During emergency law, we are Alevis.” Hashtags seem to be the only method the fragile opposition has to hold on to hope in Turkey.

There are more examples indicating Turkey’s fast movement toward an Islamist system, no longer necessarily led by the AKP, but just tolerated and encouraged. The AKP has championed radicalization, masculinization and Islamization so much so that the unintended consequence is now the populist demand to reinstate the caliphate in Turkey. These Islamist and ultranationalistic groups, which are indeed contradictory on the theoretical spectrum, but work in tandem currently in Turkey, are the only opposition who can write, speak and protest freely in Turkey. What is ahead then for Turkey? With the rhetoric of national mobilization, more visible violence is expected against leftists, foreigners, Alevis, Kurds, gays and women.