How the Balkans’ «European Dream» Collides with Their Vital Interests 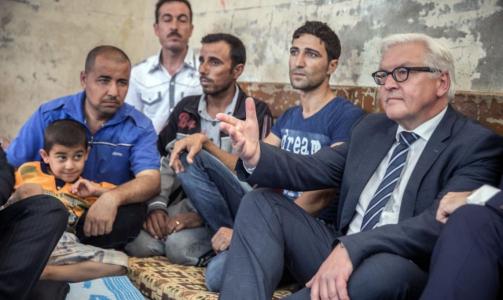 PYOTR ISKENDEROV
How the Balkans’ «European Dream» Collides with Their Vital Interests
It is not often in the tension-ridden European Union that politicians on different sides of the political barricades express solidarity on key issues.

And it would be difficult to find more radical opponents in the EU than the governments of Hungary and Germany. Hungarian Prime Minister Viktor Orban has repeatedly accused Berlin of trying to profit from the debt crisis at the expense of economies in Central and Eastern Europe, of imposing solutions to the migration problem that are detrimental to European civilisation, and of simply pursuing absolute predominance in Europe. He also recalled how German tanks flattened Hungarian land during World War Two.

The German government has given as good as it got, accusing Orban of authoritarianism, dictatorial ambitions, suppressing democratic freedoms, and undermining EU unity.

The upcoming elections in Germany are forcing German politicians to recognise the truth, however. What’s more, the crisis in the European Union has reached such proportions that it can no longer be boiled down to Orban’s scheming. German Minister for Foreign Affairs Frank-Walter Steinmeier is already being forced to deliver gloomy forecasts. In an interview with the German newspaper Süddeutsche Zeitung, he stated that the European Union could collapse if it does not take urgent action.

According to Steinmeier, supporters of a ‘united Europe’ need to radically revise their strategy and, in particular, abandon such increasingly irritating slogans as ‘Eternal peace on the continent’ and ‘Europe does not have an alternative’. «The financial crisis, the wave of refugees into Europe, and the shock of the British referendum have pushed Europe into serious turbulence», said Steinmeier. He believes that the leaders of right-wing parties and movements in Europe have understood voter concerns well and used the errors in Brussels’ policies to win votes. The German Minister for Foreign Affairs is convinced that: «If we ourselves do not appreciate the value of the EU, it will collapse».

Moreover, Social Democrat Steinmeier is not even trying to hide the internal political (pre-election) reasons underlying his statements, noting that his department is planning to carry out a series of consultations «with all interested parties» in the country between October 2016 and March 2017.

And at exactly the same time as the people of Germany were reading the interview with their Minister for Foreign Affairs, the people of Hungary were discussing Viktor Orban’s powerful speech to his compatriots at a ceremony in Budapest to mark the 60th anniversary of the tragic events of 1956. Like Frank-Walter Steinmeier, he also talked of the serious threat hanging over the European Union, but he did not link it to the growing popularity of right-wing parties, but to what he referred to as the growing «Sovietisation» of the European Union.

Orban suggested that he was not referring to the activities of European communist parties when he talked of the «Sovietisation» of the European Union, but to the desire of Brussels to rob European states of their independence in making political decisions (like «under the Soviets».) The people responsible for this «Sovietization», said Orban, are those in the European Union «who want to tell us who we should live with in our countries».

«We want to be a European nation, not a nationality within Europe», stressed Viktor Orban, adding that «there is no free Europe without nation states and thousands of years of wisdom from Christianity».

The Hungarian prime minister’s message was met with support from Polish President Andrzej Duda, who was at the ceremony. «You can count on Poland, we march together in the toughest moments. Two countries which were built on Christian foundations and are now free in the unified Europe», Duda said.

The threats spoken of by Steinmeier and Orban, albeit very differently, are being particularly felt in the Balkan States. The countries in this region, having placed rapid integration into the EU at the top of their foreign policy priorities, are now being forced to follow Brussels even when it comes to their own security. This also applies to their policies with regard to Russia, with whom virtually every Balkan country has developed ties going back centuries. Yet neither historical experience, nor present-day bilateral agreement projects, including in the energy sphere, are preventing countries like Montenegro and Albania from following the path marked out by Brussels. Joining the EU’s decision to extend sanctions against Russia has shown this once again, providing Russia with yet more proof of the Albanian and Montenegrin governments’ lack of independence.

At the same time, the Balkan countries’ range of foreign policy priorities cannot just focus on Brussels. And while even Montenegro and Albania’s economic interests are taking a back seat in their desire to please the Council of the European Union, the aspirations of another country to join the EU, Serbia, are based on the need to strengthen its security, including through political and military cooperation with Russia. At the very time the EU was agreeing to the possibility of extending its anti-Russian policy, the first ever joint Russian-Serbian military air exercises, known as ‘BARS-2016’, began in Serbia. Their aim is to develop methods for the interception of air targets, tactical strikes against ground targets, landing operations, and search and rescue support with a view to conducting joint anti-terrorist operations. Russian MiG-29 fighter jets and Mi-8 helicopters, in which there is still much interest in the Balkans (and not just the Balkans), make up the core of the aircraft involved in the exercises.

At present, the attitude of EU member states towards the European Union as a supranational bureaucratic institution with its own particular corporate interests is complicated and extremely ambiguous. This requires that all high-level politicians, including Balkan ones, define their interests and preferences more responsibly. Even while maintaining confidence in a European Union that essentially no longer exists.