Skip to main content Skip to search
Secondary menu
Home » For Turkey, there’ll be no turning back

For Turkey, there’ll be no turning back 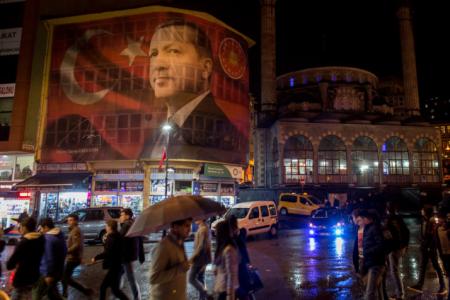 President Erdoğan will stop at nothing to enforce his vision for a country that’s already changed dramatically.
By MELIK KAYLAN
I have watched the authoritarian crackdown in Turkey unfold incrementally from near and far. I arrived back in the country a week after the attempted coup. Soon after, collective round-ups began and the mood changed sharply. Friends stopped answering their cellphones. They deleted me from their ID lists. They couldn’t risk leaving evidence of contact with me, a journalist from outside often critical of President Recep Tayyip Erdoğan’s regime.

I had traveled to Turkey as a foreign tourist in late August, when the government suddenly decreed all journalists must have a visa to leave the country. The time came to present myself at the Turkish Airlines security desk for departure. The clean-cut, smartly dressed young man holding my passport gazed at his computer for an awfully long time. He called over his superior, a highly competent-looking woman in her forties. She too stared at the screen fixedly, pale, irritable and seemingly under intense pressure. Finally, she tossed her head in exasperation and waved me on.

That same day, I subsequently learned, the government purged scores of personnel from the airline on suspicion of colluding with the Gülenists, the group they accuse of orchestrating the July 15 coup.

I think of that woman often. Heaven only knows what her calculations were, what trouble her decision cost her or saved me.

Soon after, another 15,000 government employees lost their jobs. The number of those sacked, imprisoned and exiled is now officially in the hundreds of thousands — though the real number is likely to be closer to 1 million. Think of the affected family members and you have a multiple of that number.

No one in the supine Turkish media openly says so, but the government is either inflating the threat or has knowingly helped orchestrate it. Both are undoubtedly true. And everybody knows it.

Recently, I spoke to Istanbul locals in the construction business who were trying to get their money out of the country. Some years ago, they bid for a contract to build a high-rise. They applied for planning permission. Officials told them they first needed to contribute to the building of a Gülen hostel near an established Gülen school. My interlocutors drink and smoke and care little for religion or clerics. But they complied. They have now been detained.

Another contact wanted to publish corporate leaflets for an airline. He was told he first needed to make a deal to publish a Gülenist periodical. I haven’t heard from him in a while. Such stories abound.

Respectable, middle-class, even wealthy citizens are now looking for ways to leave their country. Immigration lawyers of Turkish origin in Britain, Europe and the U.S. are overwhelmed with Turks applying for residence visas abroad.

They face concerns familiar to citizens of other countries that have descended suddenly into despotism: how to keep your family safe, how to avoid the scrutiny of predatory officials, how to sell off your assets without destroying everything you’ve worked for. Timing is everything. You wait too long and countries impose quotas. Oligarchs at home loudly declaring their loyalty to Erdoğan will try to dispossess you and plunder your private assets.

Amid all of the upheaval and chaos, Erdoğan is pushing for constitutional change for presidential rule. But he’s also in the business of socially engineering the country toward Islamism. When it’s too obvious, he receives pushback — as he did in his recent attempt to pass a law where rapists would walk free if they married their victims. But on a more subtle level Erdoğan is succeeding — and the process is not likely to slow.

As the tourism industry takes a dive, so does the entertainment industry, bars, restaurants, night clubs and the alcohol trade. For some time now, the government-funded housing authority has refused to authorize residential high-rises with single-living apartments, in an effort to choke off the lifestyle. Visitors from the Gulf and other Muslim countries now outnumber Western visitors.

Erdoğan has openly discussed the naturalization of more than 3 million Syrian refugees, but appears not to worry about secular Turks leaving in droves. He has had the gall to say publicly that if Turkey were a dictatorship, opposition journalists would not be allowed to escape to exile, as some — including the prominent Can Dündar — have succeeded in doing.

Erdoğan is structurally and forcibly changing Turkey’s cultural center of gravity. During the early years of the Ottoman Era, Turkey wasn’t a friendly neighbor, but a hard-line extension of the Middle East. It won’t be long before Europe wakes up to find that is what it has become once again.

Melik Kaylan is a foreign affairs columnist for Forbes.com and co-author of “The Russia-China Axis: The New Cold War” (Encounter Books, 2014).