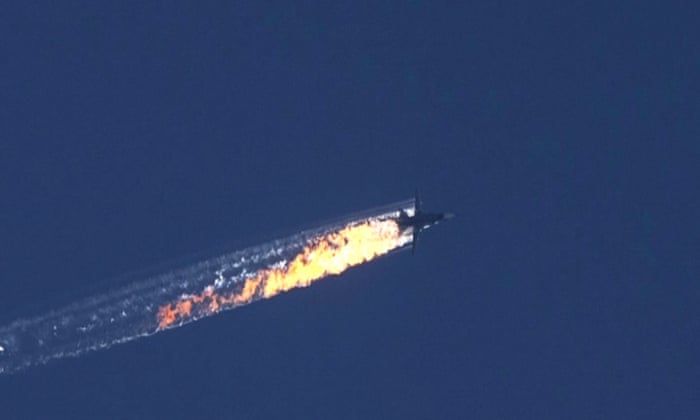 Keir Giles
Vladimir Putin has called the shooting down of a Russian jet by Turkey “a stab in the back”, and warned of “serious consequences”. His emotional response was in sharp contrast to earlier, more measured statements from Moscow, calling for patience while the details of what happened became clear. The Russian president’s angry personal involvement is alarming, as it could lead to dangerous and harmful Russian responses regardless of the rights or wrongs of the incident.

Tensions between the two countries had already been rising. The shooting down of the plane comes the day after Turkey called for a UN security council meeting to discuss Russian actions in Syria, following the summoning of the Russian ambassador in Ankara to hear a protest over air attacks on Turkmen villages.
If Russia wishes to retaliate, there are a number of different ways in which to do so short of any kind of military action, including diplomatic, economic and other levers. Russia is a major export market for Turkey, and Turkish construction firms are involved in a large number of major building projects there, each of which provides a target for sanctions or other measures.

Another possible target is energy – the two sides are already in dispute over the price of Russian gas sold to Turkey. Many of these measures could, however, be counter-productive, causing at least as much harm to the Russian economy as to Turkey’s. But Russia has shown repeatedly that economic concerns come second to other factors, even in the current situation where the Russian economy has been fatally undermined by low oil prices.

A clash like today’s was probably inevitable given two factors: the firm and consistently applied Turkish rules of engagement when it comes to protecting its airspace; and Russia’s lax attitude to straying across other people’s borders. The contrast is with the other end of Europe, where Russian aircraft wandering into the airspace of Nordic and Baltic nations, whether deliberately or by accident, does not generate the same kind of unequivocal response. The diplomatic responses by northern European states to this problem provide much less of an incentive for Russia to ensure that its aircraft behave themselves and navigate precisely.
The robust Turkish response to airspace violations will have come as no surprise whatsoever, especially after the precursor to this incident on 3 and 4 October, when Russian aircraft received similar warnings but removed themselves before being attacked. So Russia was fully aware of the rules by which Turkey is playing, and they are rules which Russia understands. Turkey’s habit of firm responses creates clear and unequivocal red lines and limits on what kind of behaviour by Russia is acceptable.

It will take some time before the circumstances of the shooting down are established, and the initial claims and counter-claims should be seen in that context. If the Russian Su-24 aircraft was one of those with dated navigational systems, relying on support from handheld GPS navigators, simple navigational error could be one cause. But Turkey says it gave the Russian aircraft 10 warnings over five minutes. Five minutes doesn’t sound long, but it is a long time for a fast jet to be heading in the wrong direction.

It may therefore be clear to others in Moscow that the tragic death of the air crew involved is likely to have been the result of their own error or a miscalculation by their commanders, and it is in the interests of neither side to escalate the situation. In October, the Turkish response when it came to involving Nato was very measured; the deliberate approach to calling for consultations under article 4 rather than article 5 of the North Atlantic Treaty was a political message. Despite Putin’s claims – apparently untrue – that Turkey raised the issue with Nato before talking to Russia, limiting the problem to a bilateral issue will be important for preventing uncontrolled and unnecessary escalation.

In any case, Russia will continue to deny that its aircraft entered Turkish airspace at all. But here, Moscow has a serious and self-inflicted problem. It may claim that it has “objective data proving that its aircraft never left Syrian airspace”. But after 18 months of misinformation, lies and outright fantasy peddled by Russia over its involvement in Ukraine – and in particular over the shooting down of Malaysia Airlines flight MH17 – this will be of little value. Put simply, thanks to Russia’s previous actions, even if its spokesmen do in fact tell the truth, its “proof” will have no credibility whatsoever.