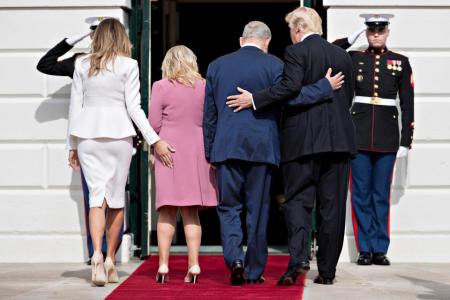 Some commentators have held up the fact Air Force Once flew directly to Israel from Saudi Arabia as some sort of symbol of an opening from Saudi Arabia and recognition of Israel. This is misguided. The fact the President of the United States flew directly to Israel from Riyadh says nothing special. What would have been shocking is if the Saudis had such influence over the US that they were able to force the US President to divert Air Force One to a temporary stop in Jordan on the way to Israel just to say the flight didn’t go directly. There is absolutely no significance to this being the “first” flight between the countries. It isn’t the “first” in any meaningful way. It isn’t a commercial flight. The Saudis didn’t approve it, they just allowed the US President to leave their air space. The flight is meaningless, but behind the scenes there are warming relations between Israel and the Saudis and the Gulf. Israel was mentioned at Trump’s Arab Islamic American summit, without any coughing about the “Zionist entity.”

Why didn’t Trump move the US embassy?

In December 2015 candidate Donald Trump was asked about moving the US embassy to Jerusalem and recognizing the city as Israel’s capital. He was non-committal. Soon after he changed his position on the embassy and said he would move it. Then in January 2017 he changed his mind again, after meeting with King Abdullah of Jordan. It seems obvious now that the embassy issue is a non-starter, it will be a final status issue, as it has been in the past. The US embassy is a carrot held in front of Israel, in exchange for Israel making a “deal” and the recognition of a Palestinian state, the US will recognize Jerusalem as part of Israel. This gives the Palestinians a veto over Israel’s rights in Jerusalem. The longer Trump stays in office the more he contracts ‘clientitis’ of the US State Department’s agenda on Israel-Palestine, the tendency to stop thinking out of the box and get set in the paradigm of the past. Even a small video the administration put out about the visit briefly showed “Jerusalem, Israel” before it was changed to “Jerusalem.” On another video the Golan, unsurprisingly, was not part of Israel.

Why did the US President visit the Holy Sepulchre and why didn’t anyone care?

“I also visited and prayed at the church of the Holy Sepulchre, a site revered by Christians throughout the world,” the US President said during remarks at the Israel Museum on May 23rd. He was the first sitting president to visit the church in recent memory. Church officials were unprepared for the visit which was announced recently and whose details were up in the air until the last moment. The US Consulate General in Jerusalem, which deals with US visits to Jerusalem, the West Bank and Gaza Strip, also was juggling details of the visit up to the last minute. Trump should have visited the church on one day and the Western Wall the next, to allow the significance of the church visit to sink in, but because he did them both the same day, the visuals in the international media mostly focused on the historic visit to the Kotel. That Trump said he prayed in the church is interesting since he is not known for being particularly religious and is a Protestant. He was met at the church by representatives of the Catholic, Greek-Orthodox and Armenians, since Protestants don’t have a presence in the holy site. Unfortunately the president did not go into much details about the importance of the church, leaving a historic visit to go largely unnoticed. In some ways his modest visit at the site was reminiscent of Pope Benedict XVI’s pilgrimage to the Holy Land in 2009, a toned down visit without the bombast. It was in line with Trump’s newfound religious interest he expressed in Riyadh of connecting the “Abrahamic faiths.”

Why did Trump visit the Kotel?

In October of 2016, according to a report at the JTA, Trump sent a note to be placed in the Western Wall. He was influenced in doing so by his daughter Ivanka who is Jewish and a close advisor. His Western Wall visit, which he did without accompaniment of Israeli officials, and after his own local officials had told Israelis the Kotel is not in Israel, had to cross a minefield of objections. Yet Trump persevered. His ambassador David Friedman, who visited the wall in mid-May, was seemingly absent from the visit. The President changed the background of his personal Twitter account soon after the visit to an image of him touching the wall. This was obviously a meaningful visit for him and it has the hallmarks of his daughter’s touch and advise on it.

Why did the US President go to Bethlehem to meet Palestinians, rather than Ramallah

Since the 1990s Ramallah has become the administrative capital of the Palestinian Authority. But the PA likes to host foreign dignitaries in Bethlehem, especially Americans. This is often paired with a visit to the Church of the Nativity. Trump upended the need for the church visit by going to the Holy Sepulchre. So why did Abbas host him in Bethlehem, rather than at the Muqata in Ramallah? Perhaps Trump wanted to avoid being paraded next to Arafat’s tomb. There is a helipad in Ramallah, so the logistics existed. It’s unclear if Trump’s visuals with Abbas in Bethlehem accomplished much, he spent an hour with the Palestinian leader, and the rest of the stay with Israelis.
http://www.jpost.com/Arab-Israeli-Conflict/Five-whys-of-the-Trump-visit-to-Israel-and-the-Palestinian-Authority-493702