Europe Should End Its Planned Marriage with Turkey 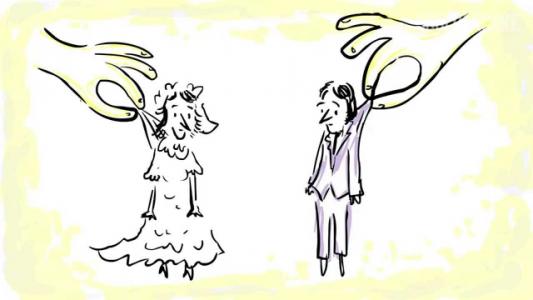 by Burak Bekdil, The Gatestone Institute
Visiting Minsk, the capital of Belarus, in the first week of November for the opening of a mosque in a dictatorial country where there are 100,000 Muslims, Turkish President Recep Tayyip Erdogan accused Western Europe of "intolerance that spreads like the plague."

Erdogan described Belarus, which Western countries describe as a dictatorship, as "a country in which people with different roots live in peace." In Erdogan's view Belarus is tolerant and peaceful, but Western Europe is not. Merely because Belarus's dictator, Alexander Lukashenko, agreed to open a mosque to lure some Turkish investment.

Back in Turkey, things look more Belarusian than Western European, a culture Erdogan despises. In August, an Istanbul court ordered Asli Erdogan, a prominent author and journalist, arrested on charges of membership in an armed terror organization. Asli Erdogan, a peace activist and novelist, worked for Ozgur Gundem, a pro-Kurdish newspaper. She has remained in prison since her arrest. The prosecutors demand an aggravated life sentence plus 17.5 years in jail for her.

How did the novelist "support terror"? This is from the indictment: "[I]n an understanding of a novelist, [the accused] portrayed terrorists as citizens in her columns." The prosecutor's "evidence" is four columns by Asli Erdogan. Mehmet Yilmaz, a columnist, suggested that Turkish law faculties, after this indictment, should be closed down and converted into imam schools.

Turkey's incompatibility with the democratic culture of Western Europe is now too visible to ignore.

President Recep Tayyip Erdogan's crackdown on dissent goes on at full speed. The opposition pro-Kurdish People's Democratic Party announced that it would suspend its legislative activity after a dozen of its lawmakers, including its co-chairpersons, were arrested on terror charges.

Meanwhile Erdogan accuses Europe of "abetting terrorism" by supporting Kurdish militants as the Turkish government tries to suppress them.

German lawmakers, including leading representatives of the Social Democrats, the Greens and the Left Party, announced an initiative to "adopt" their Turkish colleagues after Erdogan's government rescinded the legal immunity of 53 of 59 Kurdish members of parliament and arrested dozens of lawmakers, party employees, and journalists.

"In the history of the program, there has never been such an extraordinary situation where I think we can say that a democracy is threatening to turn itself into a dictatorship," said German Social Democratic lawmaker and human rights expert Frank Schwabe. "We have a lot of Turkish opposition parliamentarians under threat, so we had to apply the parliamentary sponsorship program in an extraordinary way."

In another speech, Erdogan said that Turkey was ready to abandon its EU candidacy if "Europe told us they do not want us." ...

From left, Austrian Defense Minister Hans Peter Doskozil, Austrian Foreign Minister Sebastian Kurz, and Luxembourg Foreign Minister Jean Asselborn.
But the incompatibility between the democratic cultures of Western Europe and Turkey is now too visible to ignore or tone down in diplomatic language.

There are signs, albeit weak, in Europe that Islamist Turkey does not belong to the Old Continent.

Austria's defense minister, Hans Peter Doskozil, told the German daily, Bild, that "Turkey is on its way to becoming a dictatorship." Past perfect tense instead of present may have described Turkey's case better, but there is a European "awakening" on Turkish affairs.

Austria's foreign minister, Sebastian Kurz, said: "Over recent years Turkey has moved farther and farther away from the EU, but our policy has remained the same. That can't work. What we need are clear consequences."

He is right: "That" cannot work.

Europe's unpleasant game of pretension with Turkey should end at once.

A tiny EU state was bolder in calling a cat a cat. Speaking of Erdogan's increasingly savage crackdown on dissidents, particularly after the failed coup of July 15, Luxembourg's foreign minister, Jean Asselborn, said: "These are methods, one must say this bluntly, that were used during Nazi rule ... And there has been a really, really bad evolution in Turkey since July that we as the European Union cannot simply accept."

Europe's unpleasant game of pretension with Turkey should end at once, with Brussels and Ankara admitting that the planned marriage was an awfully bad idea from the beginning and that Turkey does not belong to Europe, as its leader proudly says.

Let Turkey go on its voyage to become another peaceful Belarus.