Erdogan in a Corner After Blunders and Bluster 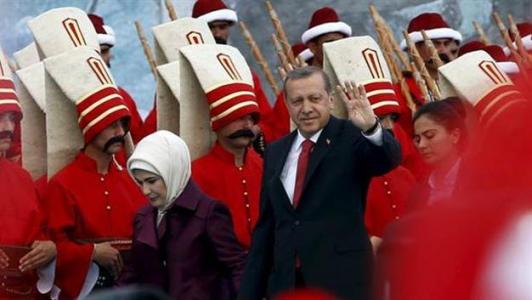 Melik Kaylan
Turkey's President Erdogan has put himself in a geostrategic corner with almost no options. Having publicly railed against the US for allegedly supporting the failed coup at least tacitly, he has roused popular feeling against Turkey's NATO alliance.

His quarrels with the EU have created similar divisions. Meanwhile he has made loud overtures to the West's rivals. Turkish media reports that Erdogan conducted several lengthy conversations with Vladimir Putin. Envoys have travelled back and forth to Iran. Officials from his AK party raised the possibility that Turkey might join the Shanghai Co-operation Organization while others floated again the prospect that Ankara would buy Russian or Chinese missiles. His efforts have yielded little for him or his country other than palpable proof of his impotence as a regional player.

Having offered himself as a kind of neo-Ottoman champion of the Sunni cause, he has been unable to help the Sunni side in the ongoing regional struggle. The retaking of Mosul involves Kurds and largely Shiite Iraqi fighters as they dislodge ISIS with little regard to Sunni sensitivities. Erdogan's incursion across the Syria border with tanks and armored vehicles has ground to a halt after a purported November 24 airstrike by Assad's jets near the border town of Al Bab. Unable to provide air cover for his expeditionary force, he has had to sit by and watch the Sunni resistance in Aleppo get slaughtered. Most recently, Turkmen militias trained by Ankara withdrew from Aleppo back to the border area to bolster the Turkish presence there. At the very least, Erdogan hopes to dig in and prevent Kurdish elements from uniting ultimately to create a Kurdish state along Turkey's southern border.

It's curious that the Turkish military cannot defend itself against Assad's airforce so close to Turkish territory. The explanation goes back to the incident last November when Turkey shot down a Russian Sukhoi Su-24 fighter jet. Since then Turkey's airforce has stood down against Russo-Syrian airpower having received no support from Nato allies to prosecute the air war. The Russian military controls Syria's skies because it has to avoid crossing swords with the US anti-ISIS effort. In short, the attack at Al Bab had Moscow's fingerprints all over it. This, at a time when Erdogan is trying to realign his country away from the West toward Moscow. That he had to find out the hard way rather than sounding out the prospects before he sent in substantial military forces illustrates Erdogan's badly planned and scattershot approach to strategic decisions.

However muzzled the Turkish press, there's no disguising from public view the setbacks suffered abroad. Especially not when Erdogan himself openly and repeatedly reverses himself for all to see. Just this week he declared that Israel was a vital ally—not six years since Israel's attack on the Mavi Marmara, the ship carrying supplies to Hamas. Soon after the coup attempt, he also reversed himself on hostility toward Moscow by disavowing last November's shootdown of the Sukhoi. It would all matter less if he didn't, Putin-fashion, posture as a modern-day Ottoman sultan selling his people imperial nostalgia in place of a sound economy and personal freedoms. Putin at least notches up successes to go along with his posturing.