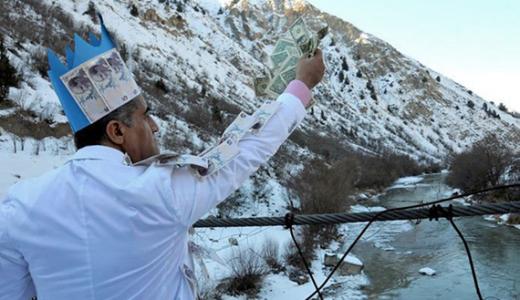 Turkish President Recep Tayyip Erdogan’s call for citizens to convert their dollars to prop up the sagging Turkish lira continues to elicit colorful responses. Barbers promised free haircuts to customers who could prove that they had exchanged their dollars, and stonecutters offered free tombstones. Today, a crooner from the heavily Kurdish province of Hakkari answered the call and dumped his dollars, with a video to prove it.

Turkish President Recep Tayyip Erdogan has called on citizens to convert their dollars to Turkish lira to shore up the economy, but many are choosing other options.
Sporting a crown crafted from lira banknotes and singing his latest composition extolling the virtues of the Turkish currency, Aydin Aydin threw a fistful of greenbacks into the Zap River near his native village of Bagisli, on the Iraqi border. Some of Aydin's fellow villagers, similarly adorned with lira crowns, braved the snow to join him in the bizarre ceremony. “In keeping with our esteemed president’s orders, I am supporting the campaign to ditch dollars,” Aydin declared.

Few, however, believe that such a display, with its attendant whiff of self-promotion, will help reverse the downward spiral of Turkey’s once robust economy.

Erdogan launched his appeal for Turks to convert their foreign currency into gold or liras last month, after the currency sank to its lowest value since the 2008 global financial crisis. Most economists blame the lira's fall on a strong dollar buoyed by the prospect of the US Federal Reserve implementing an interest rate hike and domestic instability compounded by the July 15 coup attempt. Erdogan, however, has resorted to his usual conspiracy mongering to explain why the lira has lost nearly a fifth of its value against the dollar this year.

“Our currency is being targeted through foreign exchange speculation,” Erdogan told a gathering of provincial administrators at his presidential palace in Ankara Dec. 7. Speculators, he claimed, are “trying to divide and destroy” Turkey. “If you love this country, if you love this people, you should switch to Turkish lira,” he exhorted.

Erdogan, pushing for constitutional reforms to formalize the sweeping powers he already exercises, has cause to be jittery. The continued popularity of his ruling Justice and Development Party rests on its near unremitting economic success.

His government’s ill-conceived Syria policy — which, among other things, has allowed jihadis from the Islamic State and al-Qaeda-linked Jabhat al-Nusra to organize and carry out attacks in Turkey — has scared off tourists. The crackdown on alleged coup plotters, including hundreds of businesses, has scared off foreign investors. Erdogan’s constant meddling, including calls for banks to lower lending rates, has only made matters worse.

“Troubled loans have risen the highest in seven years, with some lenders, such as Akbank TAS and Turk Ekonomi Bankasi AS, reporting a jump of as much as 30 percent in the last quarter,” Bloomberg reported Dec. 6. A day later, the rating agency Fitch said it had revised its outlook for Turkey’s banking sector in 2017 from “stable” to “negative.” In a statement, Fitch contended, “Foreign-currency lending makes up about a third of total loans and is at risk, as the Turkish lira has fallen sharply and could fall further.”

On Dec. 7, however, the lira rebounded slightly against the dollar, prompting government spokesman Numan Kurtulmus to credit the president’s conversion crusade for the apparent turnaround. Responding to accusations that Erdogan was not practicing what he preached, presidential spokesman Ibrahim Kalin retorted Dec. 8, “[The idea that] our President Erdogan would launch such a campaign and would not participate is out of the question.”

Regardless, anecdotal evidence suggests that many Turks are seeking safer havens for their money. A London-based banker who closely follows Turkey told Al-Monitor, “Any Turk who can get his money out of the country is doing just that.”

Even Aydin, the patriotic bard, shows some caution: The dollars he threw into the river were all singles.