Skip to main content Skip to search
Secondary menu
Home » Enough with Teddy Bears and Tears: It's Time to Take Our Civilization Back

Enough with Teddy Bears and Tears: It's Time to Take Our Civilization Back 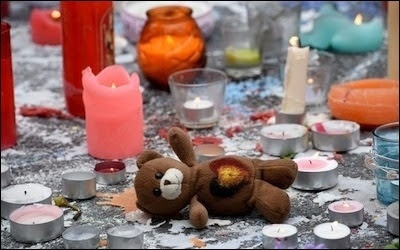 by Raheem Kassam, Breitbart
Teddy bears, tears, candles, cartoons, murals, mosaics, flowers, flags, projections, hashtags, balloons, wreaths, lights, vigils, scarves, and more. These are the best solutions the Western world seems to come up with every few months when we are slammed by another Islamist terrorist attack. We are our own sickness.

Since the world learned of the dozens dead, hundreds injured, and hundreds of thousands affected by Monday's attack on the NATO and European Union capital, we have seen an outpouring of what is commonly known as "solidarity."

This word – most commonly associated with hard-left politics, trades union activism, socialism, and poseur indie rock bands – has come to mean very little in reality. In effect, "standing in solidarity" with someone now means that you have observed the situation, changed your Facebook profile picture accordingly, and patted yourself on the back.

And if like dead bodies Facebook profile pictures lost heat, it would be accurate to say that the Tricolores that adorned the social media profiles of many had hardly become cold before we were all changing the colours of the bands on the flags. From blue to black. From white to yellow. The blood red remains.

Teddy bears symbolise our response to our way of life being threatened: inanimate, squishy, and full of crap.

Because nowadays, teddy bears are the new resolve. They symbolise everything we have become in response to our way of life being threatened, and our people being slaughtered on our streets: inanimate, squishy, and full of crap.

Our security services and our police, hamstrung by political correctness, are just as interested (or more?) in rounding up Twitter "hate speech" offenders than criminal, rapist, or terrorist migrants. Our borders are as porous as our brains. We refuse to realise that there are now literally millions of people amongst us who hate us. Who hate our way of life, and who will, one day, dominate our public life.

But of course, such statements are dismissed as fear-mongering, alarmist, or "out of touch with reality." As if the data doesn't exist, or the demographics aren't shifting quickly enough to notice.

As if vast parts of our towns and cities haven't become ghettos, or no-go zones, or hubs of child grooming activity, or terrorism.

As if mosques, schools, prisons, and universities aren't used as recruiting grounds for radicals.

As if the blood of our countrymen hasn't even been spilled at all.

Instead, we will now think deeply about how we can "reach out" to these populations. How we can "co-exist" and "be tolerant" of one another. As if toleration – which is actually the permittance of what is not actually approved or desired – is a healthy aspiration for a society.

We chastise those who fail to 'tolerate' the most barbaric traditions of alien cultures.

It is as if we model our countries on the practice of bending over and "taking one for the team", chastising those who fail to "tolerate" the most barbaric traditions of alien cultures. It is everything this cartoon – obviously branded "racist" – suggests.

"But come on, Raheem, not all immigrants, or Muslims, are criminals, or rapists.... you're not!"

Yeah – and look at me. Excoriated daily by Islamists on Twitter. Why? Because I've integrated and I love my country. Because I refuse to believe that an Islamic caliphate is the best thing for Britain, or anywhere, quite frankly. Where is my white (or brown) knight? Where are the voices of the moderate Muslim world defending me?

The famous Belgian comic character Tintin, depicted reacting to the terror attacks.
Not that I need protection, or defence, but some people aren't as hard headed or resolved as I am.

Thusly, the albeit minority evil amongst British Muslims is thriving because good Muslims are doing nothing. At some point, we have to question why. I'm not sure most people are ready for the answers to that one.

So continue to sit there with your head in your hands. Mourning only to make yourself feel better. Missing people you never knew. Exclaiming, as the most immature of minds does: "Why can't we all just get along?"

Expressing sympathy is no bad thing. But to be truly sympathetic towards someone under attack, one must be chivalrous, gallant, and unafraid.

Watching someone getting raped, and tweeting your solidarity with them is not enough. Human nature and goodness calls upon us to intervene. To assist. To free someone from their torture, and to save them from their demise.

The albeit minority evil amongst British Muslims is thriving because good Muslims are doing nothing.

It is not enough to scrawl "no fear" on a post it note, and stick it onto some £3 flowers.

We must be fearless in electing leaders who we feel will best keep us safe. It is one of the few areas of our lives in which we should be able to feel comfortable. We pay our taxes, you keep us safe.

If not, then we must arm ourselves. If our governments refuse to protect us, or even begin to use the tools with which we empower them against us: surveillance, counter-terror laws, detention, then we will need to take the law back into our own hands. We cannot be afraid of doing so. It is where our societies all sprung from.

It is why arms sales to individuals has shot up since the migrant crisis in Europe. Many Germans are losing their faith in their elected leaders to protect them. The same applies in Sweden, and in Austria. Some people refuse to take being wiped out laying down. How quaint.

It is time to start making serious, wide-reaching demands of our politicians on the subject of immigration and Islamism.

It is also time to start to make serious, wide-reaching demands of our politicians on the subject of immigration and Islamism.

Do we leave cities with soldiers on patrol. With "peace" signs scrawled onto bomb-struck buildings? Or do we leave them safe places, with real promise for the future. Like our parents, or at least our parents' parents, left us.

In order to confront this question, we have to get to the root cause of the problem. There is too much immigration, or at least, not enough hand-picked immigration, into the Western world today.

People of my age had no choice that our post-war leaders felt the heavy hand of post-colonial guilt on their shoulders, and decided to open up our countries, and flood us with "diversity."

But we do have a choice to not make the same mistakes again. And we have a duty to correct the ones that were made.

And yes, that does mean exactly what you think it means. It means ending mass migration. It means smashing apart ghettos and no go zones. It means repealing laws that allow for Sharia councils. It means asserting what it means to be British, or European, or American, without fearing a backlash from the political left, or the media classes who scarcely see a face my colour let alone darker.

Let them riot. Let them cry.

I would far rather be subjected to ceaseless "direct action" by the scourges of my own society than import others.

At least if my fellow countrymen are deplorable, I won't get called a racist for pointing it out.

So put down the teddy bears, burst the balloons, and let's start demanding again that our countries are safe and civilised. And if we can't find people who'll make that happen for us... let's do it ourselves.

Raheem Kassam is a Shillman-Ginsburg fellow at the Middle East Forum and editor-in-chief of Breitbart London.