Skip to main content Skip to search
Secondary menu
Home » Can the presidential system wipe out the MHP?

Can the presidential system wipe out the MHP? 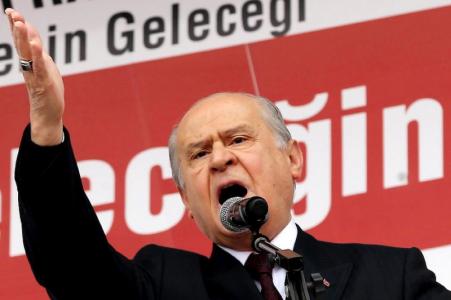 Taha Akyol
Apparently, the Nationalist Movement Party (MHP) leader Devlet Bahçeli has accepted a system that removes the “government” institution. The name of this is the presidential system.

However, parliamentarian systems generally strengthen a two-party system. Elections where two presidential candidates compete usually marginalize the third and fourth parties. In Turkey, apart from the ruling Justice and Development Party (AKP) and the main opposition Republican People’s Party (CHP), because of their regional votes, the pro-Kurdish Peoples’ Democratic Party (HDP) can form a group in parliament in such a system.

According to Elif Çakır’s story published in daily Karar, the MHP says it will not agree to a system that would wipe out its existence. Well then, what does it agree to? The MHP agrees to remove the institution of the government where all executive powers are taken over by the executive president; in other words, the presidential system. The election system will continue as it is. On CNN Türk, Ünal Kaya said the MHP did not have an election system change on its agenda. Thus, the AKP has given up the “single member district” it has been supporting for the sake of the presidential system, consenting to the current election system which is in favor of the MHP.

It looks like it could be a presidential system that would give a place to the MHP in parliament.

The power of parliament

Those defending the presidential system are arguing that there will be a “strong parliament” in this system, like the U.S. Senate.

AKP executives have repeatedly highlighted that the separation of powers and the independence of the judiciary will be kept and that the legislature will be strengthened.

If it is to happen this way, then there is no need to worry. But, the concerns for authoritarianism are on how these fundamental principles would be practiced. How these concepts will reflect to practice, needs to be seen in the constitution.

In the U.S., there are elections held at certain times in order to renew parts of the senate and the House of Representatives. In Brazil, two elections are held on the same day but a portion of the assembly and senate are renewed every two years with by-elections.

Thus, the legislative power’s superiority over the executive power is strengthened. Here, on the other hand, the ruling AK Party wants to hold both elections on the same day, which would actually make the legislature not a “subject” but an “object” of the executive, like today.