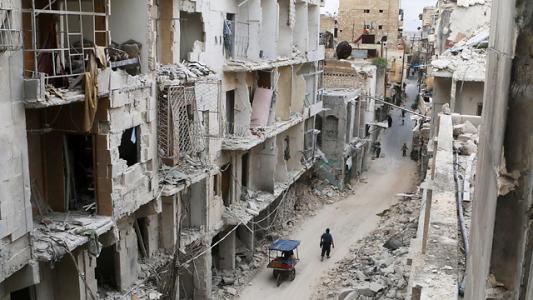 According to Tuesday’s reports, the city of Aleppo which was ruled by the rebels has fallen to the Syrian government’s control, and the opposition fighters will be evacuated on buses together with the residents who remain in the ruins that used to be Syria’s second largest city.

The ceasefire agreement, which was brokered by Russia and Turkey, will empty Aleppo of Bashar Assad’s opponents, and the Syrian president will be able to declare that he has gained control of Syria’s economic capital after three and a half years of fighting.

Assad and his partners in the country’s civil war scored a major military and morale achievement once the battle for Aleppo was decided.
But the battle for Syria is far from being over, and it will continue a long time from now. The reason is the rebels’ refusal to give in, and the fact that the Syrian army is not well-prepared to remain in the areas it has occupied for long. The defection and draft-dodging phenomena, as well as the many casualties, have caused the army to shrink to about half of its size from the eve of the civil war. The number of maneuvering units, armored, infantry and engineering forces, has been reduced as well.

This is the reason why towns and villages conquered by the regime forces often return to the rebels’ hands, and then back to the army. A similar situation could happen in Aleppo as well and in the Idlib province in northern Syria, where the last rebels have fled. That is where the next major battle will likely take place.

Iranian and Russian forces have contributed to Assad’s war effort and are sending thousands of fighters of Hezbollah-led Shiite militias, as well as enormous amounts of weapons and modern munition, in addition to massive and indiscriminate bombings on population centers where the rebels are hiding. But even the massive aid is incapable of deciding the war, just like what happened in the old and strategic city of Palmyra, where Assad diluted his forces in favor of the fighting in Aleppo and lost it to ISIS this week.

Who gains from the victory in Aleppo?
Members of the Alawite minority and other minorities, including the middle-class Sunnis who earn a living thanks to the regime, are the ones who stand to gain most from Assad’s victory in Aleppo.

The Aleppo takeover provides the regime with many strategic advantages: The city served as a logistic and operational home front for the Syrian army, and its occupation by the regime disconnects the rebels from their supply bases in Turkey. Above all, the moral achievement boosts Assad’s confidence and crushes the combat spirit of the rebels, who are being slaughtered these days in the eastern part of the city along with its residents.

The Russians stand to gain from the regime’s victory in the city as well. According to Russian President Vladimir Putin’s method, the aerial force he sent to Syria will keep Assad in power while preserving the Syrian dependence on “Mother Russia.” The Russians’ indiscriminate bombings on civilian centers will maintain the control of two military bases and the seaport in Tartus.

Russia is being harshly criticized in the international arena for its dubious cooperation, and Kremlin officials are worried about the economic price the war is claiming. This is likely another one of Putin’s interests – to bolster Assad in order to allow him to negotiate from a position of power and take part in the talks to end the fighting which are being held between Russia and the United States.

Assad, however, is not showing any signs of flexibility and compromise on the issue. He is demonstrating excessive self-confidence as the Russians and Iranians stand by his side. The rebels’ leadership is not accepting the world powers’ conditions for a ceasefire either, and is playing a part in the collapse of the lull in the area time after time. The possibility of a peace agreement that will lead to the end of the war is, therefore, still far away.

Another country that stands to gain from the Assad victory is Iran. While the Russians contributed to the occupation of Aleppo with aerial bombings and military supplies, the Iranians provided what the Americans call “boots on the ground.” If it were not for the Hezbollah and Shiite militia fighters, there would have been no one to wave the Syrian flag in the destructed neighborhoods and quarters in the eastern part of the city.

The fact that Assad is growing stronger will allow the Iranians to strengthen their hold on the eastern coast of the Mediterranean Sea and arm Hezbollah undisturbed. And so the radical Shiite sequence will spread even more, from Tehran, through Baghdad and Damascus, all the way to Beirut. The radical Shiites and the Iranians are openly declaring that their goal is to destroy Israel.

The losers: Syrian citizens, Israel and oil states
Israel is not alone on the losing side. The massacre of Aleppo’s residents, which intensified in the past week, is a bright mark of disgrace like the yellow, poisonous gas showered on the city. This is a direct and horrible result of the zigzagging and confused policy of US President Barack Obama’s administration in Syria in the past four years. Obama tried to satisfy all the elements involved in the fighting but failed, causing his country to be dragged by Russia where the split country is concerned.

The biggest losers are the Sunni rebel organizations, and the Arab oil states which supported them together with Turkey. While the last rebels have fled northward to Idlib in favor of the next battle, we must wait and see if they recover from the blow Assad has dealt to them.

What illustrates the conscious blow most of all is the rebels’ feeling of solitude. No one in the world rushed to help them during the war crimes carried out by the Russians, the regime’s army and the Shiite foreign legion in Aleppo. The Islamist rebels are not charitable noblemen, and they have also used the civilian population as a human shield. But their crimes are nothing compared to the barbaric massacre of the Russian and Shiite coalition, which has left the eastern part of the city in ruins. And the world, as always, is standing idly by.
http://www.ynetnews.com/articles/0,7340,L-4892903,00.html