After Aleppo: Iran’s Ascendancy and Its Implications 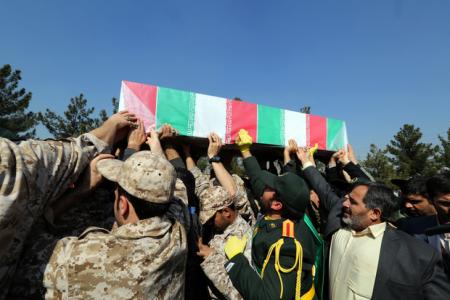 EXECUTIVE SUMMARY: Widespread moral revulsion at the horrors of the battle for Aleppo, and the aftershocks of the assassination of the Russian ambassador in Turkey, should not blind us to the dark strategic implications of the recent turn of events in Syria.

At the local, regional, and global levels, the collapse of rebel forces in Aleppo and the triumphant notes struck by the Assad regime and by Hezbollah, mark a dangerous milestone in the transformation of the so-called Arab Spring into a stormy Iranian Winter.

Practically every ideological and strategic group in the Middle East has a stake in the raw and murderous Syrian struggle. Viewed through the prism of the regional "game of camps," the fall of Aleppo represents a major boost for Iran and her allies, given the active (and costly) role played there by Hezbollah fighters and the Iranian Revolutionary Guards Corps (specifically, Qasim Suleymani). Coupled with the growing role of the IRGC-backed forces in Iraq ("al-Hashd al-Sha'bi") and the ongoing conflict in Yemen, the victory in Aleppo is feeding Tehran’s increasingly arrogant vision about the future of the region and Israel's assured demise.

It is in this context that the Iranian leadership is responding to US sanctions legislation by putting forward brazen ideas about resuming and upgrading Iran’s nuclear program. (Enrichment for nuclear-propelled naval vessels means essentially the same as enrichment for weapons-grade uranium.) These declarations can also be read as preparatory steps towards what the Iranians expect to be a "transactional" sparring with the incoming Trump administration.

For Israel, the gains made by the Assad regime, backed simultaneously (but for different reasons) by Iran and Russia, posit both threats and opportunity. They give Israel's sworn enemies greater sway in the region, while a rift is widening between Egypt and Saudi Arabia; but may also expose tensions among Assad’s backers. They validate Israel's claim that the Golan Heights can never be safely negotiated away to a brutal regime reviled by the international community.

In any case, Iran and Hezbollah must be deterred from going south after Aleppo and turning the Golan into a staging ground for harassment of Israel and the destabilization of Jordan. An open channel with Moscow is a vital link in that deterrent strategy. Equally important is Israel’s renewed diplomatic interaction with Turkey, whose policies may determine whether Sunni (and, indirectly, Israeli) vital interests will be upheld. The Israeli-Turkish thaw creates the possibility that a strong counter-coalition will emerge to contain Iran's rising power.

As these lines are written, remnants of the rebel forces in the ruins of Aleppo are awaiting implementation of UN Security Council Resolution 2328 of 19 December 2016. The object is to escort them safely out of a once-proud city that has now been pounded into a pile of rubble. A major battle is drawing to an ugly close, and Assad and his main allies have won. The war will rage on, at least for some time: but for the Syrians themselves, for the region writ large, and for the global balance of power, there are new realities to adjust to and fresh lessons to learn.

The most immediate of these, from an Arab and Turkish as well as an Israeli point of view, is the steady rise in Iranian power and arrogance. Recent speeches by Supreme Leader Ali Khamenei reveal elation over Tehran's growing dominance in regional affairs. They also indicate that the flame of hate continues to burn towards the West in general and the US and Israel in particular. (Khameini said after a meeting with Ramadan Shalah, leader of Iran's terrorist proxy, the Palestinian Islamic Jihad, that the Zionist entity should vanish within 25 years if the campaign of violence against the Jews continues.)

Unfortunately, Khamenei has some reason to be arrogant. Assad’s gains in Aleppo, while owing much to Putin, were also achieved with Tehran’s extensive backing (under the direct guidance of, and with some participation and losses by, the IRGC's "Quds Force," led by Qasim Suleymani). Elsewhere along the "Shiite Arch" (a term the Iranians avoid, and indeed, some of their proxies and allies are not Shiite), Tehran is reaping the rewards of a steady policy of support for local clients: the "popular mobilization" (al-Hashd al-Sha'bi) militias in Iraq; the Houthi uprising now in control of much of Yemen; and their ultimate proxy, Hezbollah in Lebanon.

Hezbollah has now secured control of the Lebanese presidency through the agency of a renegade Christian, General Michel Awn, and with it, a dominant position in Lebanon's political and military affairs. The bold claim that Iran is in control of four Arab capitals – Beirut, Damascus, Baghdad and San'aa – might be overstated, but not by much.

Iran’s sense of ascendancy in the regional balance of power is also reflected in its bold responses to US Congressional legislation extending the sanctions. To protect his flank against pressure from hardliners and to please the Supreme Leader, President Rouhani has been talking about responding with a full breach of the JCPoA (the nuclear deal): specifically, a rush to enrich uranium for use in nuclear-propelled naval vessels. In practice, this policy would amount to much the same as enriching uranium to weapons-grade level. Others have raised the prospect of moving immediately to the scope of enrichment that Tehran would have been allowed at the end of the ten-year period envisioned by the JCPoA – in other words, twenty times the pre-agreement level.

These increasingly assertive and dangerous declarations of intent might be the first moves in what the Iranian leadership expects to be a "transactional" game of high-stakes chess with the incoming Trump administration. This may turn out to be a miscalculation. So far, the President-elect has surrounded himself with policy makers who view the Iranian regime as an enemy, not as an interlocutor. It is still too early to tell, however, where Iran will ultimately fit into Trump’s priorities.

Trump and his team will need to evaluate the prospect of driving a wedge between Assad’s two key backers, Moscow and Tehran, after the victory in Aleppo that both of them helped him achieve. As has been argued more than once in these pages, their purposes do not cohere.

Putin came to Syria because doing so was the only way to save his client's neck – and to secure for Russia such useful benefits as the naval base in Tartus and a steady presence in the eastern Mediterranean. Khamenei, on the other hand, wants to use Syria as a springboard from which to promote the Iranian revolution's agenda. This would entail destabilizing Jordan, and establishing new capacities by which to arm and incite the Palestinians, break the Palestinian Authority, and harass Israel through a terror campaign backed by Hezbollah.

The Russians know, or should know, that making use of Syria for these purposes would put Assad, and all that Russia has invested in saving him, at grave risk. It is therefore in Moscow’s interest to deter the IRGC and Hezbollah from going south to the Golan after their success in Aleppo.

An open channel with Moscow is thus vital to Israeli interests, regardless of the moral revulsion at the agony of Aleppo. As tensions grow between Assad’s allies, Israel can use the "crack of daylight" between their respective positions to constrain Iran's ambitions.

Of similar importance is the ability to develop a strategic dialogue with Erdoğan's regime, while harboring no illusions about his basic sentiments and intentions. (Israel's broadening alliance with Greece and Cyprus, cemented further by a tripartite summit in Jerusalem earlier this December, reflects the three countries' need to insure against Turkey's occasionally adventurous policies.) Ankara is a sponsor of the Free Syrian Army, and has a vital stake in preventing an overwhelming regime takeover in areas of Syria still under Sunni control. After the Islamic State collapses, which events in Libya suggest is a real possibility, Turkey will be a key element in the Syrian equation.

Putin clearly seeks to bring about a Turkish-Iranian understanding over Syria (and the assassination of the Russian ambassador by an enraged Turk has not derailed this effort). Their common interest in preventing Kurdish independence may add to the intensity of the dialogue. In this context, while Erdoğan cannot ever be expected to act on Israel's behalf, it would be useful for Turkey to be aware of Israel's interests and red lines in Syria.

At this point, the "camp of stability" is being rattled by tensions in Saudi-Egyptian relations, and Sisi – like his Libyan adjunct in Cyrenaica – is drifting into Russia's orbit. Turkey, acting on behalf of Sunnis at large, may well be the player that determines whether Iran's ascent will be effectively contained. This would also serve Israel's long-term interests in Syria and Lebanon: namely, a balance of power that does not leave Hezbollah and its masters in Tehran free to turn their attentions elsewhere.

Col. (res.) Dr. Eran Lerman is a senior research associate at the Begin-Sadat Center for Strategic Studies, and former deputy for foreign policy and international affairs at the National Security Council. He is also a member of the faculty at Shalem College.

BESA Center Perspectives Papers are published through the generosity of the Greg Rosshandler Family
http://besacenter.org/perspectives-papers/388-lerman-after-aleppoirans-ascendancy-and-its-implications/