A Saudi embrace against Iran 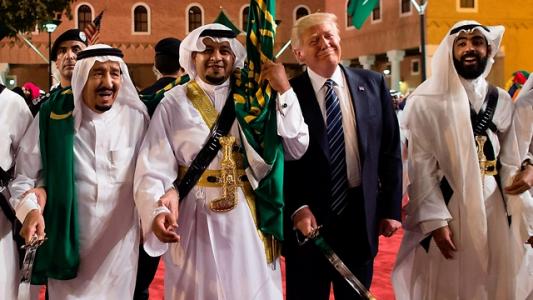 Op-ed: A day after leaving Saudi Arabia, the American president’s speech seems to be a continuation of the traditional line adopted by all presidents since the 9/11 attacks. In lieu of the Trump who built his political career on condemning Islam and Muslims, we got Trump’s oath of allegiance to the Sunni narrative in the Middle East.

Nadav Eyal|
A rare historic moment took place in Riyadh on Sunday: US President Donald Trump found himself in an awkward situation. Why? The amount of flattery he was showered with appeared to be too much, even for him.

It happened during his meeting with Egyptian President Abdel Fattah al-Sisi, who went to the trouble of defining him as “a unique personality that is capable of doing the impossible.” Trump, who is no stranger to megalomania, burst out laughing and replied: “I agree.”

It was a symbolic moment in his trip to Saudi Arabia, which focused on anointing the president with refined oil and dollar bills. The deal it devised was simple: We will embrace you and do the sword dance around you, add a huge check for the arms deals and you will create an anti-Shiite, anti-Iranian axis.

It’s a deal which works for both sides: Trump wants to show that he is providing budgets and workplaces to the American arms industry, which supported him in the presidential election. The Saudis are terrified by Iran’s progress and achievements in Yemen. There is also the war in Syria, the Israeli-Palestinian conflict and the oil prices. The last point is critical: If the oil prices remain low, the International Monetary Fund predicts that the Saudis will lose their foreign currency reserves by 2020, which means the kingdom will become a failure: After decades of cheap oil, it has missed the opportunity to build a real economy—75% of its income is still from oil.

Trump’s speech was basically a continuation of the traditional line adopted by all US presidents since the 9/11 attacks: The battle is not between religions or civilizations, but between “barbaric criminals,” the terrorists,” and the “decent people.” Between the good and the bad. An attempt to embrace the Arab world which opposes terror, and emphasize its centrality—while pushing the radicals away. Ironically, of course, the speech took place in the homeland of Wahhabist Islamist radicalism. But irony is not an obligation in the Trump era.

Where is the Trump who built his political career on condemning Islam and the Muslims? The Trump who said, “I think Islam hates us”? Well, he has evaporated. Some people are trying to define every comment he makes as a “historic” change from the Barack Obama era, but a review of his predecessor’s Cairo speech demonstrates that the call on the Muslim nation to denounce terror, the distinction between terrorists and law-abiding Muslims, the opposition to the “clash of civilizations” characterized the Obama rhetoric as well. Obama also signed $115-billion arms deals with Saudi Arabia. Trump signed on $109 billion—a deal which was prepared during the Obama era. The Saudi promise for another “$350 billion over 10 years” is written on the shifting sands of Hejaz.

What was different about the speech was the American president’s oath of allegiance to the Sunni narrative in the Middle East: A day after the Iranians celebrated a reformist victory, America informed them that it is actually severing ties. The Saudis were satisfied, and satisfaction may have been recorded in Jerusalem as well.

It’s hard for us, as Israelis, to accept the fact that the president’s visit here is a supplement of his important visit to the Arab world. But this is reality: The money is there, and so are the big troubles, as Trump sees them—the radicalization which is followed by the violence.

The real American-Israeli dialogue began as Air Force One landed at Ben-Gurion Airport on Monday. Does Trump intend to invest a real political capital in Mideast peace, or is it only rhetoric? Will he push the parties into an agreement, or will he settle for “sincere efforts,” as American diplomacy is accustomed to? And most importantly, what part will Israel play in the regional alliance that is taking shape against Iran and in the possibilities of a conflict with the Islamic Republic? This possibility, without a doubt, increased significantly on Sunday evening.