A Bright Future for Solar Power in the Middle East 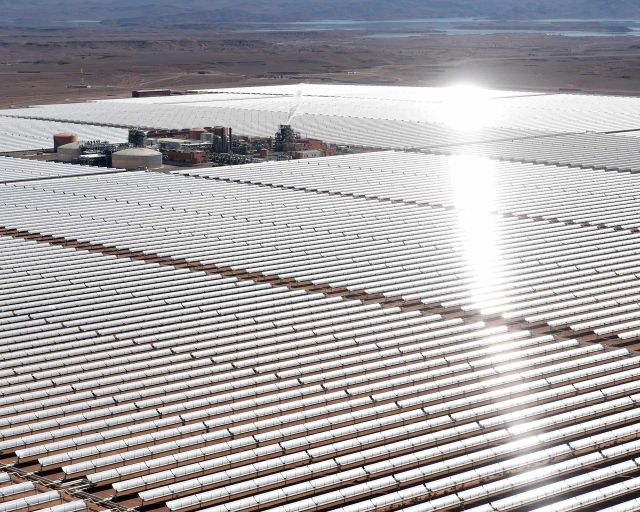 Stratfor Analysis
Deserts are seemingly obvious places to locate solar technology. In fact, the swath of desert stretching from the Atlantic Ocean, across North Africa and the Arabian Peninsula, to the Persian Gulf has vast solar potential. But until recently it has not been economically feasible, or even necessary, to develop the renewable resource. In many areas, geographic constraints such as rough terrain have made solar projects impractical.

Only now has a combination of demographic pressure, low oil prices and technological readiness primed Middle Eastern and North African states for more investment in solar power. For countries such as Jordan and Morocco, renewable energy may offer a path toward greater energy independence. Others, such as Saudi Arabia and the United Arab Emirates, are interested in exporting renewable energy technology and financing solar projects abroad.

The steady price decline of solar power generation infrastructure, especially photovoltaic cells, is making the renewable option more viable for North African and Middle Eastern states, a region where the sun shines in abundance. Not only is the technology becoming more affordable, but operational costs after construction are also minimal when compared with hydrocarbon-based generation. As a result, several countries in the Middle East and North Africa are focusing on solar power as a means to satisfy rising electricity demand, make cuts to unsustainable government subsidy programs and reduce dependence on energy imports. 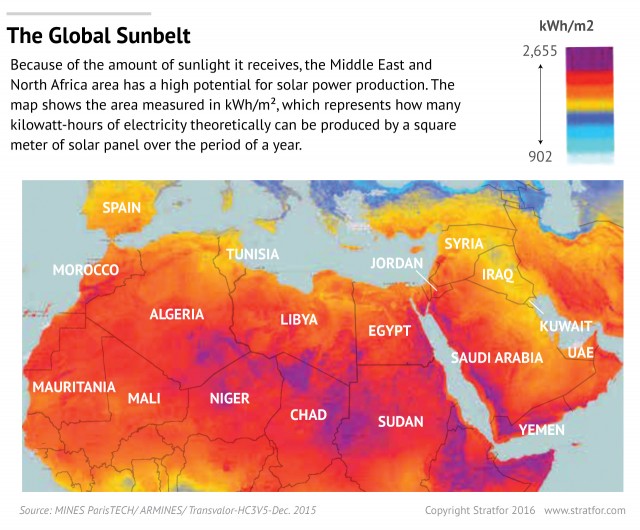 Solar will not replace hydrocarbons as the region's primary energy source, but where markets can meet national goals and strategies, it has the potential to help some countries diversify their power sources. Given the region's growing energy demand, interest and investment in solar generation there will increase in the near and medium term.
Jordan and Morocco: Energy Importers

Jordan, a relatively stable kingdom in a largely tumultuous region, is vulnerable to demographic challenges. The nation imports more than 95 percent of its energy at a cost of roughly 16 percent of its gross domestic product. Its energy dependence makes it somewhat vulnerable: In 2011 and 2012, disruptions in natural gas supplies from Egypt caused Jordan to deplete its energy reserves entirely. The problem arose again in 2013, when oil imports from Iraq were interrupted. Uncertain energy supplies have the potential to stoke unrest in the country, where energy costs are heavily subsidized by the monarchy. After all, an erratic domestic electricity supply has been among the main aggravators of social upheaval in nearby Lebanon, Iraq and Egypt. Jordan subsequently made efforts to diversify its sources of electricity by increasing solar capacity, and in recent years it added wind and nuclear generation. If Jordan is to meet its goal of relying on renewables for a full 20 percent of its generation capacity by 2018, solar will play a major role.

Numerous projects, large and small, are underway in Jordan, from installing solar panels on the rooftops of homes to building large solar parks with 200-megawatt capacities. Jordan has made the bidding process for renewable energy projects relatively easy, which has attracted companies from around the world. Jordan will be unable to reach its lofty goals on its own; public-private partnerships will be crucial to the growth of the renewable energy sector.

Much like Jordan, Morocco imports most of its energy — about 90 percent. The similarly stable nation is also looking to renewables, especially solar power, to increase energy security and lower energy costs. But Morocco is taking the idea a step further by building what will be the world's largest power plant using concentrated solar technology, which employs mirrors or lenses to focus sunlight that generates heat to power turbines. The first phase of the project, the Noor Solar Complex near the city of Ouarzazate, opened earlier this year. Morocco has set a lofty goal: to have renewables account for half its electricity production by 2025 (solar would satisfy about a third of the demand). The nation even aims to become an electricity exporter. Of course, the scale of its projects requires large tenders, requiring international investment and limiting the participation of domestic companies.

Morocco's burgeoning solar sector still faces some challenges, not least of which is the need for a reliable storage method, all the more important since sunlight is a naturally fluctuating power source. Still, with its geographic advantages and relative social stability, Morocco appears to be in prime position to exploit its solar power potential.
Egypt: Growing Demand

Egypt's political, security and financial institutions are not as stable as those of Morocco or Jordan, and in Egypt the threat of social unrest is more potent. But industry publications still tout the country as a potential hot spot for renewable energy investment. Egypt's massive population creates an enormous energy demand, which may strain the government's budget but also opens up opportunities to invest in technologies to meet the growing need.

Egypt's energy woes are not new. Production has steadily declined because of a lack of investment in domestic oil and natural gas operations. Meanwhile, domestic energy demand has risen. But President Abdel Fattah al-Sisi has implemented reforms that have attracted renewed investment to the natural gas sector, with projects such as Eni's Zohr natural gas field being fast-tracked.

Renewable energy will not necessarily meet all of the public's most urgent needs. Cooking fuel, for instance, has sometimes been in short supply, and solar power will not directly resolve that problem. Still, preventing summer brownouts (now all too common in Egypt) is a priority for the government, which has lost much of its popular support. Improved natural gas production can help provide a more consistent electricity supply, but with demand expected to climb, there is room for additional forms of power generation. Recent agreements signed with Japan and South Korea to develop solar power and associated projects indicate that Egypt is looking beyond traditional relationships to further the renewables energy sector, though both European and regional players such as Saudi Arabia and the United Arab Emirates are still active investors.
Saudi Arabia, UAE and Algeria: Exporters Remain Exporters

Saudi Arabia relies on oil for electricity production, and it faces rising domestic demand for electricity at a time when low oil prices have put significant financial strain on the government. Its domestic fuel consumption is following an unsustainable trend. Using over 3 million barrels of oil per day domestically, Saudi Arabia is already the largest global consumer of petroleum for power production. About a third of its daily oil consumption is used to fuel power plants. Without additional sources of generation to satisfy climbing electricity demand, the share of oil consumed by electricity generation would climb.

Although Saudi Arabia is gradually implementing subsidy reforms designed to reduce domestic energy demand, it still will develop energy alternatives, which is where solar power could come into play. Under current goals, renewables would account for 8 percent of electricity production by 2020 and 15 percent by 2030, with solar power accounting for the majority of that increase. In the past, however, Saudi Arabia has lengthened the timelines for such targets.

Yet Riyadh has made significant strides in exporting solar technology. Saudi company ACWA Power is involved in multiple projects in the region (Morocco and Jordan) and farther away (South Africa and Turkey). Saudi Arabian Oil Co., the national oil company, has even expressed interest in developing solar export capability. With plans to add solar technology production facilities, Riyadh could maintain its role as a regional solar exporter, especially as its domestic solar power sector continues to develop. ACWA Power has gained a regional reputation as having sufficient economies of scale to underbid other major solar power firms, mostly Western or East Asian companies. This helped ACWA Power win large bids such as the first phase of Morocco's Noor plant and the Mohammed bin Rashid solar park in the United Arab Emirates.

The United Arab Emirates, meanwhile, has positioned itself as a renewable energy financier and development hub. It is the home of the International Renewable Energy Agency, and it hosts important conferences focused on both renewable and nonrenewable energy. Furthermore, it has used its ample hydrocarbon largesse to develop unique large- and small-scale renewable projects in ways that less resource-rich countries such as Morocco, Jordan and Egypt cannot match. The United Arab Emirates has established itself as a regional leader in solar power in part because of its greater ability to adopt the technology (both domestically and through partnerships with other countries) and to fund projects throughout the world. Masdar, the country's renewable energy arm, is connected with the Mubadala Development Co., one of the country's smaller sovereign wealth funds. Masdar is involved in projects throughout the Middle East, Africa, South America and Europe and on islands in the Pacific.

Algeria, a leading natural gas producer, has ambitious plans to follow a similar path with solar energy. Renewable power installations totaling 22 gigawatts of capacity — 13 gigawatts of that solar — are proposed to go online by 2030. That is enough power to meet nearly a quarter of domestic needs while still reserving a significant portion for exports. But exporting renewable power will require substantial research and investment into solving the problem of insufficient energy storage, which is a barrier to incorporating large amounts of variable renewable power worldwide. Algeria will require foreign investment and cooperation to meet its grand plans. While Algeria is more stable than some of its neighbors, such as Libya, its government is in a slow leadership transition, and the risk of instability caused by protests relating to development and distribution of energy resources is high. Nonetheless, the country has made strides toward attracting the necessary investment to build out its solar capacity. With over 250 megawatts of capacity installed in 2015 and work occurring at additional sites in 2016, Algeria is moving toward its target of 15 percent of electricity being generated by solar by 2020.
Keeping Things in Perspective

Solar power's role in the region is poised to grow. The technology is nearing grid parity, the point at which it costs the same or less than the traditional technologies that feed the electrical grid. And solar's cost will likely come down even more. Until energy storage technology improves, however, incorporation of renewables into electricity grids will be somewhat constrained, especially for the full use of larger planned projects.

Although it will stay subordinate to hydrocarbons, solar is primed to become a more prominent part of the energy mix in the Middle East and North Africa. Its development offers investment opportunities that, while limited to well-capitalized entities, could eventually shift a portion of energy dependence in the region. In the shorter term, solar projects may actually create dependence on other countries for some nations, but they will also nurture the nascent renewable energy sectors in which domestic companies are eager to invest. In time, solar projects could help states diversify their sources of electrical power and become more energy independent.