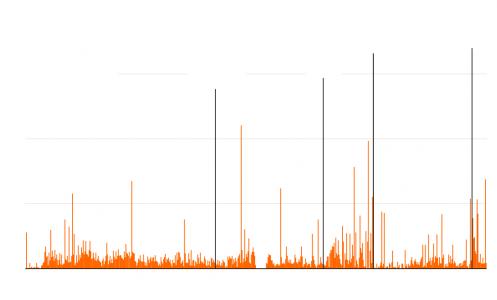 By Chris Alcantara
The attacks can happen almost anywhere: In a holiday market outside a historic church in Berlin, on the street during a national holiday in France, in an airplane over Scotland or during the first day of school in a small town in Russia.

Sometimes, a plot fails – a detonator malfunctions or authorities make an arrest – and no one is injured.

Other times, an attack leaves a trail of death and destruction that can shake a nation. Sometimes a continent.

Terrorism across Europe has killed 10,537 people in 18,803 reported attacks – excluding those considered military tactics in war zones – between January 1970 and December 2015, according to the University of Maryland’s Global Terrorism Database (GTD).

Attacks in 2014 and 2015 have seen the highest number of fatalities, which includes terrorists targeting civilians, government officials, businesses and the media, across Europe since 2004. The frequency and deadliness of attacks have shifted between Eastern and Western Europe since 2000.

From the 1970s to the ’90s, Western Europe saw a rise in nationalism-inspired terrorist attacks from groups such as the Provisional Irish Republican Army in Northern Ireland and Basque Homeland and Freedom, otherwise known as the ETA, in the Basque Country in northern Spain.

[ How terrorism in the West compares to terrorism everywhere else]

While attacks started to become less frequent after 2000 in Western Europe, they remained deadly.

Meanwhile, in East Europe, attacks became more frequent around the fall of the Soviet Union in 1991.

Terrorist groups formed in the ensuing conflicts throughout the former Soviet republics, with some receiving support from Islamist terrorist groups such as al-Qaeda.

Historical hot spots
Russia, the United Kingdom, Ukraine, Spain and France are among the countries with the highest number of terrorism deaths, according to the database. More people died in terrorism-related attacks in Russia than any other country in Europe, according to the GTD.

The country experienced one of Europe's deadliest attacks in September 2004 when members of the Riyadus-Salikhin Reconnaissance and Sabotage Battalion of Chechen Martyrs, an Islamist force of suicide attackers, took more than 1,000 people hostage during the first day of classes at a school in Beslan, North Ossetia, in the North Caucasus region.

More than 300 people died at the end of the three-day siege. About half of the victims were children, according to reports. Much of the terrorism deaths in the United Kingdom during the late 20th century came from attacks orchestrated by the Provisional Irish Republican Army and other associated factions.

These attacks occurred during The Troubles, a 30-year ethno-nationalist conflict in Northern Ireland between loyalists, a majority of which were Protestant who wished to remain part of the United Kingdom, and republicans, who were exclusively Catholic and fought to become part of Ireland.

While the IRA was the deadliest group to be active in the United Kingdom, they were not responsible the country’s most devastating terrorist attack: the 1988 Lockerbie bombing.

On Dec. 21, 1988, a bomb exploded inside Pan Am Flight 103 as the plane flew over Lockerbie, Scotland. The explosion killed 270 people. Abdel Basset Ali al-Megrahi, a Libyan intelligence officer, was convicted in 2001 for the attack. In October, Scottish prosecutors said they wanted to interview two Libyans who they suspect worked with al-Megrahi. Similar to the United Kingdom, terrorist attacks from the 1970s to the 2000s in Spain were from pro-national groups.

The most notable was the ETA, also known as Basque Homeland and Freedom, a group that committed kidnappings, assassinations and bombings with a goal to make the Basque Country independent. It was disbanded in 2011.

In March 2004, a series of bombs on trains along the Cercanías railroad system in Madrid killed more than 190 people.

It was the country’s deadliest attack. Abu Hafs al-Masri Brigades, an Islamic group with ties to al-Qaeda, claimed responsibility. Ukraine experienced more than 180 terrorist attacks that resulted in at least one death since 1992.

However, a majority of the country’s deaths – more than 800 – occurred within the last two years during the ongoing conflict in eastern Ukraine, according to the database.

The attacks – those targeting civilians, businesses, the media and government officials without any wartime strategic value – have been attributed to the Donetsk and Luhansk people’s republics.

The deadliest attack in the country’s history occurred on July 17, 2014, when Malaysia Airlines Flight 17 was shot down in eastern Ukraine. Nearly 300 crew members and passengers died.

In September, a Dutch-led investigation said the missile that brought down the plane originated in Russia and was fired from territory held by pro-Russian separatists. France’s deadliest year for terrorism deaths was 2015 with more than 140 deaths from two attacks in Paris.

In January 2015, three men who had ties with al-Qaeda in Yemen and the Islamic State shot and killed 12 people at the Charlie Hebdo offices in Paris.

Ten months later, the country saw its worst terrorist attack in history when members of the Islamic State coordinated a series of shootings and bombings across Paris that left about 130 people dead.

Note: Terrorism deaths are limited to attacks that were not classified by the GTD to be wartime tactics. Monthly data for 1993 was not available.